The Shake Shack manager accused of poisoning police officers’ drinks last summer claims he was treated like a first-rate criminal … and now he wants someone to pay.

Marcus Gilliam — the man who was running the Manhattan restaurant when this went down about a year ago — just sued a number of NYPD cops, a few police unions and the City of New York for what he says was a rush to judgment and a gross overreaction, all based on nothing. 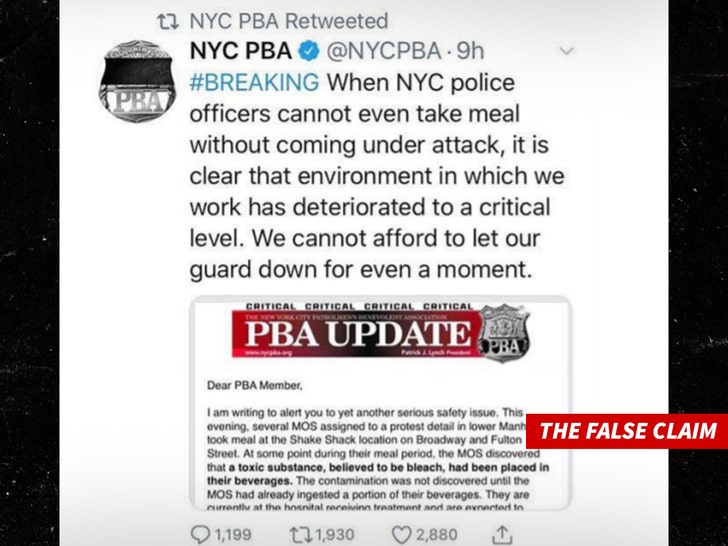 In his suit, obtained by TMZ, Gilliam alleges he was arrested and taken in for questioning that night, and was kept in custody until the wee hours of the morning … supposedly getting grilled and accused of spiking 3 cops’ shakes with bleach, even though he says he actually hadn’t.

ICYMI — 3 NYPD cops rolled up to Shake Shack, said their milkshakes tasted funny … and before you knew it, had a whole bunch of unions tweeting out accusations that their officers had been intentionally poisoned.

Gilliam points out what we had reported … that a “thorough investigation” proved that was a bogus allegation. In the interim, Gilliam says he was getting treated like crap by cops, being falsely held against his will for something he clearly hadn’t done.

As it turned out … the “funny taste” in the shakes might’ve been the machine not being cleaned properly. In any case, Gilliam claims his detainment was BS, because there was a mountain of evidence — like surveillance video — that the NYPD should have checked to clear his name before they hauled him into custody.

He alleges he was not only falsely arrested, but defamed as well when the suspicion turned into “fact” and spread like wildfire … and he’s asking for damages.

One last thing … Gilliam apparently doesn’t know the names of many of the cops he says were involved in the ordeal, including the 3 who kicked it off. So he identifies them by the types of shakes they ordered — Strawberry, Vanilla and Cherry Shakes. 😅