Look at those moves! Salma Hayek, 54, blessed her millions of Instagram followers on Monday June 7 with an impromptu dance video to promote her new film, Hitman’s Wife’s Bodyguard. But not with some boring interview or even a sneak peek of the film. Nope, Salma, along with members of her hair and makeup team,  danced along to Britney Spears iconic song, “Hit Me Baby One More Time” in most incredible homage we’ve ever seen! She did nailed all of the classic moves from the video: the fan kick, hair whips, and even death drop! Damn!

Salma captioned the video, which shortly after it was posted had been liked by half a million followers, “show me your #hitmanschallenge baby!” The call is clearly out to her fans and followers, the same folks who desperately wanted her to reprise her role as Sonia Kincaid in the new movie, to get moving on their own Instas and TikToks! (Fingers crossed Britney will do a video too!) 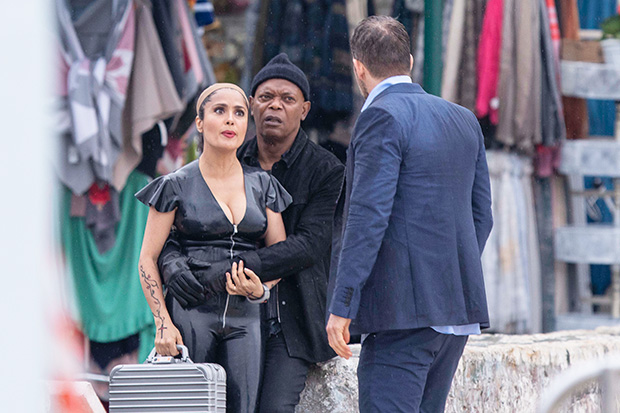 Hitman’s Wife’s Bodyguard is not the only film the actress has coming out this year. Last month, Marvel Studios released the teaser trailer for the long awaited film The Eternals , in which Salma will play Ajak, a wise and spiritual leader who is a source of guidance and knowledge to the immortal alien race. The movie, which also stars Angelina Jolie in her first role in the MCU, releases on November 5. 2 Weeks later, fans will get to see Salma as Giuseppina “Pina” Auriemma in Ridley Scotts upcoming film The House of Gucci, alongside Lady Gaga, Adam Driver and Jared Leto. It debuts on November 24. What a great time to be Salma Hayek, huh?!