President Donald Trump took the stage on night four of the Republican National Convention on Thursday to officially accept the Republican presidential nomination. As he took the podium at the White House, he began by thanking his family, wife Melania Trump, and mentioning his late brother, Robert Trump.

“I know my brother Robert is looking down on us right now from heaven. He was a great brother and was very proud of the job we are all doing,” he expressed, before accepting the nomination. “My fellow Americans, tonight, with a heart full of gratitude and boundless optimism, I profoundly accept this nomination for president of the United States… This is the most important election in the history of this country.”

Twitter, naturally, had much to say following his lengthy speech.

Going back to #RHONY. Trump is boring me.

I must've misheard, I thought I heard Trump say he has done more for the Black community than any other President since Lincoln? #trumpchaos

Since Donald Trump just took credit again for the Veterans Choice act, here’s a picture of him signing it into law in 2014.#RNC2020pic.twitter.com/pu8n7WlLbG

Donald Trump is painting a picture of what the next 4 years would look like, if he is reelected – and it's scary af!

Before the businessman turned politician addressed the public, a number of his supporters, as well as daughter Ivanka Trump, expressed their support for him.

“My father has strong convictions,” Ivanka stated, adding, “Whether you agree with him or not, you always know where he stands. I recognize that my dad’s communication style is not to everyone’s taste and I know that his tweets can feel a bit unfiltered, but the results, the results speak for themselves.” 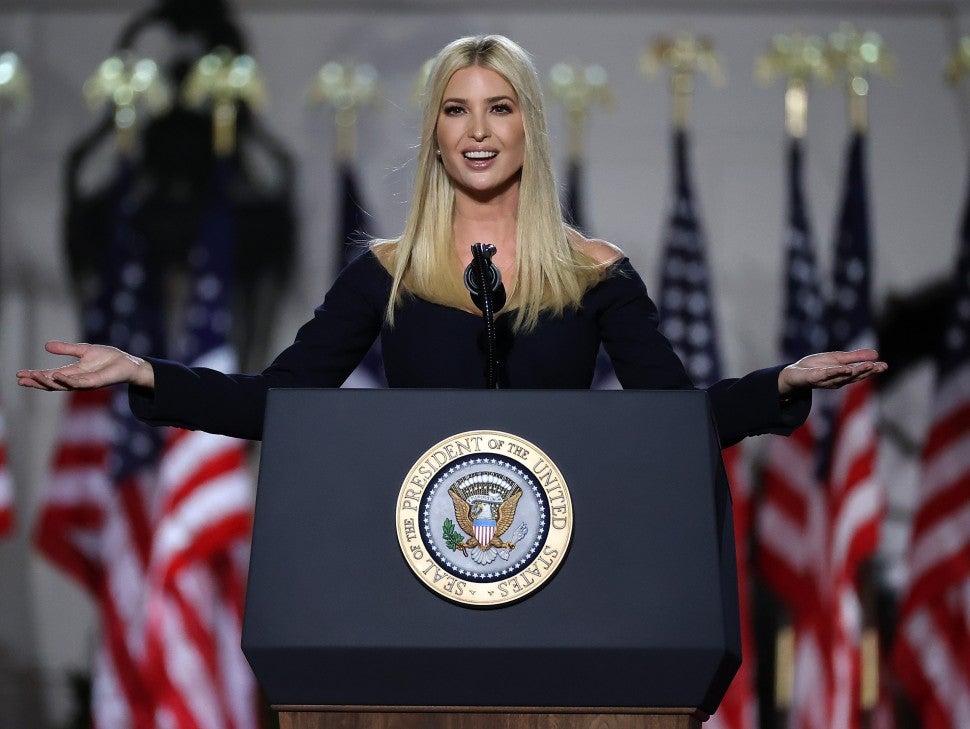 People on social media, including celebs like Alyssa Milano and Yvette Nicole Brown, shared their thoughts on Ivanka’s speech.

Yet he doesn’t say a word about the bounties his buddy Putin put on American soldier’s heads.

“While others chose party, our president chooses people.” [email protected]

Bish, when?! WHEN has your horrible pappy chosen people? Do you mean YOU? Are you “people”?

Beyond that, she’s WITH him to catch all those folksy asides a LOT.#RNC2020

I have met @IvankaTrump a few times. In 2015, when she guest judged a show I hosted, she told me I was her hero.

So Ivanka is co-president? Because that’s sure as hell what that sounded like.

Alice Marie Johnson, whom Kim Kardashian West famously helped free from prison, also took the podium, to thank Trump for changing her life. In May 2018, Kardashian West visited Trump to ask for clemency for Johnson, who was serving a life sentence for a first-time, nonviolent drug offense. Johnson, 64, was released from prison on June 6, 2018, after serving 22 years.

“I was once told that the only way I would ever be reunited with my family would be as a corpse. But by the grace of God and the compassion of President Donald John Trump, I stand before you tonight, and I assure you, I am not a ghost. I am alive, I am well, and most importantly, I am free,” Johnson expressed. “Free in body thanks to President Trump, but free in mind due to the Almighty God.”

"The nearly 22 years I spent in prison were not wasted."

Alice Johnson, grandmother whose sentence was commuted by Pres. Trump, calls on people to "take action for those who are forgotten. That's what our president, Donald Trump, did for me." https://t.co/EyJzJDolZ4pic.twitter.com/UQgG1WZR0t

Following her speech, many took to Twitter to praise Johnson and her journey.

Alice Marie Johnson taking us ALL to church 🙌🏾🇺🇲

Alice Marie Johnson may be the best convention speaker yet. This is not the party of McCain, Bush or Romney.

“Our hearts go out to the Blake family… As Jacob’s mother has urged the country, let’s use our hearts, our love and our intelligence to work together to show the rest of the world how humans are supposed to treat each other,” he expressed.

HUD Secretary Dr. Ben Carson shared words of solace for the family of Jacob Blake and others "who have been impacted by the tragic events in Kenosha." https://t.co/dLMvlNR8Cd#RNC2020pic.twitter.com/eDQsUdxYNF

Election Day is Nov. 3, 2020 — head over to Vote.org to register to vote and to get all the latest information.

Related posts:
Nike, adidas and PUMA Release Statements on Jacob Blake Shooting
M&S discount: Save up to 30% on furniture, clothing and accessories in end of summer sale
Popular News
Chelsea vs Liverpool LIVE REACTION: Kepa ERROR gifts second as Mane double downs 10-man Blues – latest updates – The Sun
20/09/2020
Man Utd wonderkid Ramon Calliste, called ‘the next Giggs’, now owns luxury watch business and makes £5m a year – The Sun
26/03/2020
Megan Thee Stallion Addresses Criticism Over Twerking: ‘I Love to Shake My A**’
26/03/2020
Police guard shops to stop coronavirus panic-buyers and enforce social distancing – The Sun
26/03/2020
Coronavirus: Good Morning Britain’s Dr Hilary reveals ‘game-changing’ self-testing kit
26/03/2020
Recent Posts
This website uses cookies to improve your user experience and to provide you with advertisements that are relevant to your interests. By continuing to browse the site you are agreeing to our use of cookies.Ok