OMG Scott Foley Is TERRIFIED Of His Wife While Discussing Jennifer Garner Relationship!

Scott Foley almost NEVER discusses his past marriage to Jennifer Garner. And now we know why!

The Scandal alum was on Andy Cohen‘s SiriusXM radio show on Monday when the Bravo boss asked him about his love life during the early days of his career. Specifically, he asked the now 49-year-old actor if he’d enjoyed any dalliances with starlets while starring as a love interest on the massive hit show Felicity.

Scott stumbled through his answer, saying:

“Probably… I got married during Felicity. It was a short-lived marriage.”

That obviously would be his marriage to Garner he’s talking about. The couple met on the show and were married from 2000 to 2003 (their divorce was finalized in 2004). 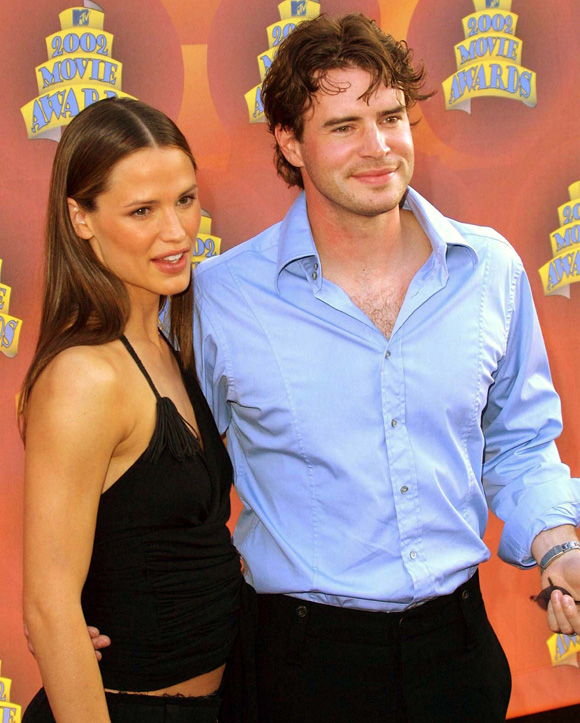 Infamously, they were the other couple broken up by the unexpected romance on the set of Daredevil — the first of course being Ben Affleck and Jennifer Lopez. But Bennifer got back together in 2021. Maybe Scott’s wife is just a tad paranoid about history repeating itself again? Because the poor guy couldn’t help but point out to Andy that Marika Dominczyk, to whom he’s been married since 2007, was also present for the interview:

“We’re speaking about this with my current wife behind me and she’s laughing. She’s really enjoying the squirming that I’m doing.”

We couldn’t help noticing when referring to the his ex, Scott spoke very judiciously:

“We were together for a total of about five years. I downplay that because my wife’s right behind me.”

Cohen noticed that Marika was “nodding her head no” at that figure and correcting that he and the Alias star were actually only “together for three years.” Scott replied:

“I think we were married for three.”

Cohen, who could see Marika from where he was sitting, checked with her visually and noted that she “co-signs” that figure. Hilariously, Scott acknowledged the his nervousness, telling the WWHL host:

“I’m going to let you be my eyes in the back of my head. This is dangerous, dangerous territory, my friend. This is where Andy Cohen wants to be.”

Andy knows drama when he sees it! This is the brain behind the Real Housewives franchise after all! He only dug the hole deeper, asking Scott about how he and Jennifer met. The actor answered:

“She played my girlfriend on Felicity. Yeah, we met on the show, and we hit it off instantly and were soon dating.”

Man, he could not be done with that fast enough! Ha! But Andy kept going, apparently enjoying the squirming more than Marika!

He asked if Scott would avoid his ex if he ran into her at an awards show. The Grey’s Anatomy star steered clear of controversy — but also made sure not to once again mention his current wife first and foremost:

“No, you say hello. You’re very civil. I mean, we do not keep in contact because she has her own family, I have mine. It wouldn’t be something that we would search out, but I’ve seen her a few times, especially when we were living in L.A.”

But he was quick to clarify he was never alone with his ex!

“Marika’s been with me and, you know, everybody says hi, and you’re cordial and you move on. That’s life right?”

LOLz! We just cannot get over how terrified this man seems of saying the wrong thing in front of his wife! It was like 18 years ago, y’all!

Ch-ch-check out the full awkward moment (below)!