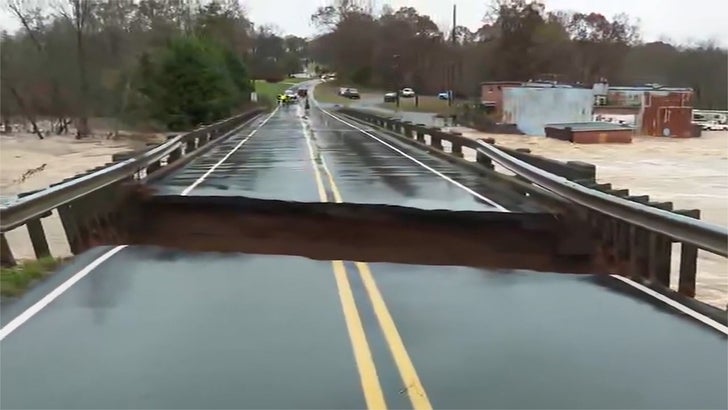 A reporter and photographer are beyond lucky to be alive after raging floodwater washed away a bridge right from under their feet … and it happened while they were live on TV.

The scary incident went down Thursday in Alexander County, N.C. on the Hiddenite Bridge where FOX 46 reporter Amber Roberts was in the middle of her live report when a huge chunk of the bridge broke off and fell into the water.

Check out the video … Amber screams in terror as she quickly realizes the danger just a few feet away from her and her crew. The collapse left about a 10-foot wide gap in the bridge, and you can see a man on the other side fleeing to safety.

Amber didn’t waste any time sending it back to the studio after narrowly avoiding catastrophe. The Carolinas are getting slammed with heavy rain … triggering flash flood warnings across several counties. More than a dozen campers were trapped by the rising water.

Rescue crews are still trying to reach them — hopefully, they make it out safely like Amber and her crew.

Related posts:
Football fans go through anti-Covid disinfection pods
Does Bachelorette Clare Crawley want kids?
Popular News
House Passes Bill Featured on Tiger King That Bans the Private Ownership of Big Cats
04/12/2020
Man Utd wonderkid Ramon Calliste, called ‘the next Giggs’, now owns luxury watch business and makes £5m a year – The Sun
26/03/2020
Megan Thee Stallion Addresses Criticism Over Twerking: ‘I Love to Shake My A**’
26/03/2020
Police guard shops to stop coronavirus panic-buyers and enforce social distancing – The Sun
26/03/2020
Coronavirus: Good Morning Britain’s Dr Hilary reveals ‘game-changing’ self-testing kit
26/03/2020
Recent Posts
This website uses cookies to improve your user experience and to provide you with advertisements that are relevant to your interests. By continuing to browse the site you are agreeing to our use of cookies.Ok