On Thursday, the Television Academy accepted the win for Rudolph’s voice-over performance on her behalf, though she later reacted to the news via Instagram Stories. “I WON AN EMMY!” she wrote alongside a selfie.

In a subsequent video message, an offscreen voice (seemingly one of hers kids) said, “Thank you Television Academy for letting me win this Emmy” as Rudolph mouthed the words. “I am so grateful because I never won an Emmy before. It’s a very wonderful feeling. I think that it would be better if I won more.” 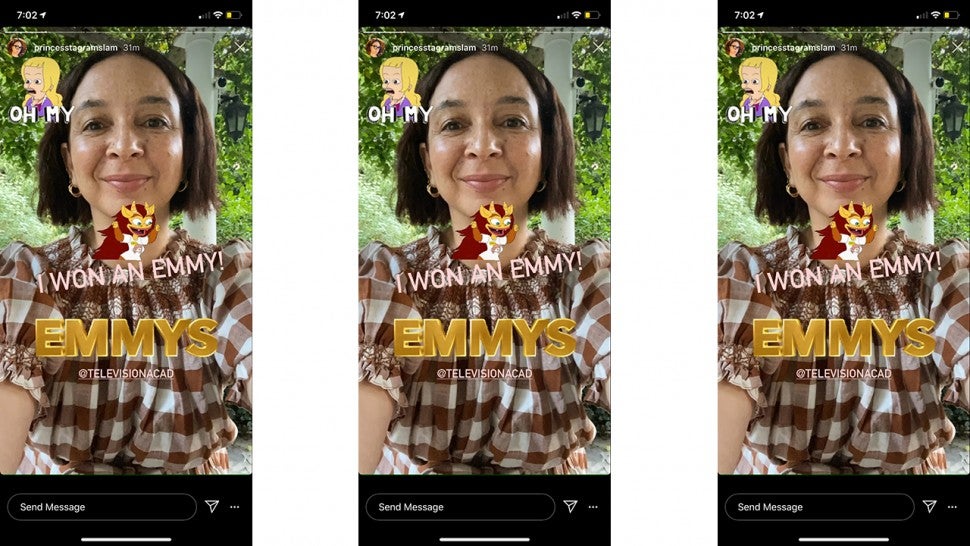 Big Mouth creator and Rudolph’s co-star, Nick Kroll, also tweeted his congratulations, writing, “MAYA!!!!!!!!!!!!” alongside an announcement of the news.

Rudolph earned three Emmy nominations this year year. In addition to the Outstanding Voice-Over Performance category, she was up twice in the Guest Actress in a Comedy Series category for her work on The Good Place and SNL.

In total, Rudolph has been nominated for six Emmys. Her three previous nods were in the Guest Actress in a Comedy Series category for her work on The Good Place and SNL.

When it came to pulling together her award-winning impersonation of the politician, Rudolph revealed it all came down to the hair. “I tend to mimic the sound of people’s voices or if there are gestures or mannerisms,” she explained in a conversation with Harris and Amy Poehler and Hillary Clinton. “But there’s nothing crazily overt about Senator Harris, but I have to tell you, when I got to Saturday Night Live and they put the wig on me, it was done.”

Hosted by Nicole Byer, the 2020 Creative Arts Emmys are being handed out over five nights, culminating in a live broadcast on Saturday at 8 p.m. ET / 5 p.m. PT on FXX. The 72nd annual Primetime Emmy Awards air the same time on Sunday on ABC.

Related posts:
These $22 Skinny Jeans Are a No. 1 Bestseller on Amazon
Man sentenced after police find loaded gun in his buttocks during strip search
Popular News
Trump Supporter Pulls Gun on Protesters After Liquid's Dumped on Him
25/10/2020
Man Utd wonderkid Ramon Calliste, called ‘the next Giggs’, now owns luxury watch business and makes £5m a year – The Sun
26/03/2020
Megan Thee Stallion Addresses Criticism Over Twerking: ‘I Love to Shake My A**’
26/03/2020
Police guard shops to stop coronavirus panic-buyers and enforce social distancing – The Sun
26/03/2020
Coronavirus: Good Morning Britain’s Dr Hilary reveals ‘game-changing’ self-testing kit
26/03/2020
Recent Posts
This website uses cookies to improve your user experience and to provide you with advertisements that are relevant to your interests. By continuing to browse the site you are agreeing to our use of cookies.Ok