Laurence Fox hits back at criticism for wearing ‘mask exemption’ badge: ‘Educate yourself’

Laurence Fox, 42, had flashed his coronavirus “mask exemption badge” to his 261,800 Twitter followers yesterday and explained at the time he had ordered the badge from online shopping site Amazon after a “long period of consultation” with himself. However, Conservative MP for North Dorset, Simon Hoare, tweeted his outrage over the news, and labelled the Lewis actor a “powered pr**k”.

It has caused deep hurt to me

Mr Hoare typed: “I hadn’t realised that being a first-class, ocean-going, chateau bottled, nuclear-powered pr**k was an exemption from wearing a mask.

“What a selfish loathsome tool this man is,” he added.

However, Laurence defended himself for forgoing wearing a mask, after revealing he is battling anxiety and had decided to not wear a mask after a “long period of consultation” with himself.

Laurence responded: “Hey @Simon4NDorset, you have never met me. You have no looking glass into my lived experience. 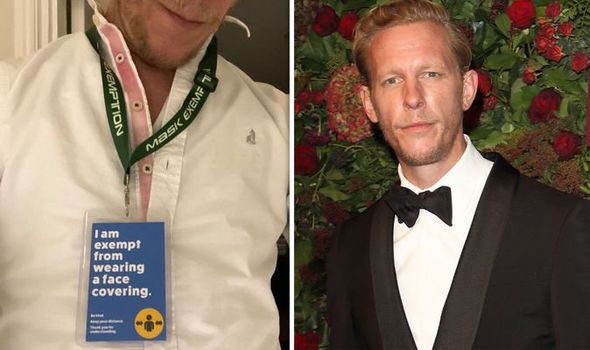 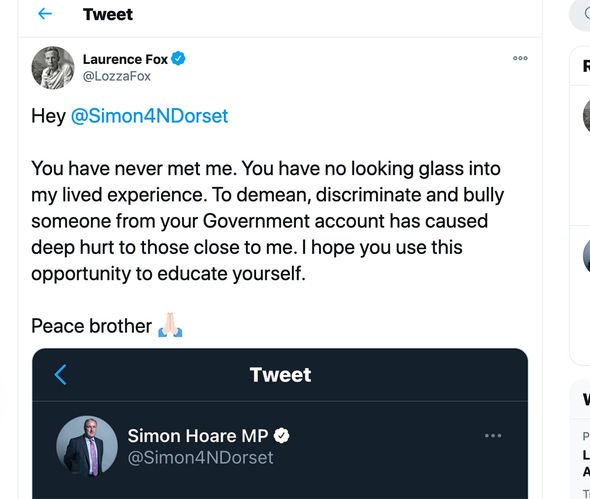 “To demean, discriminate and bully someone from your Government account has caused deep hurt to those close to me.

“I hope you use this opportunity to educate yourself. Peace brother,” he added.

It comes after Laurence shared he had decided to wear a “mask exemption” badge after “an extended review period” of his mental wellbeing.

He wrote: “After a long period of consultation with myself, an extended review period and proper due diligence conducted with myself, I’ve received the badge that I ordered from Amazon. “ 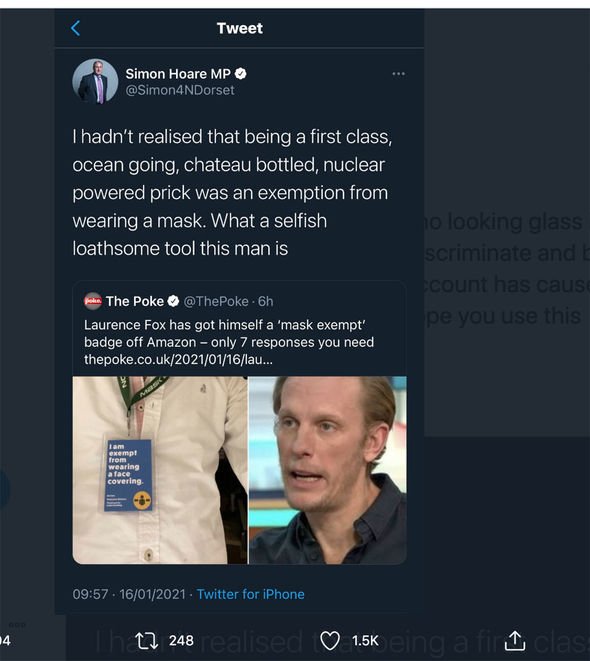 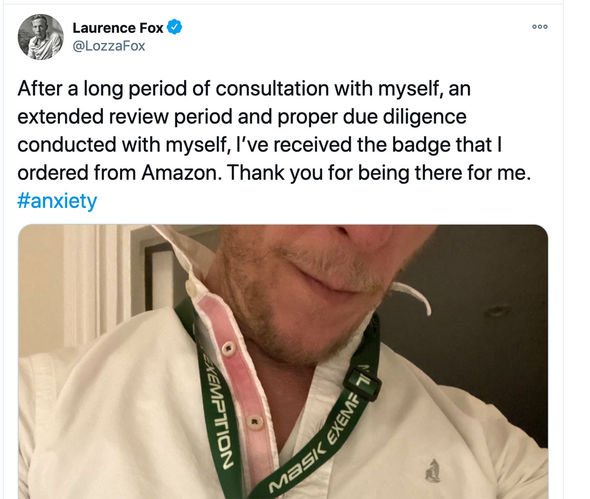 He added: “Thank you for being there for me. #anxiety.”

Some Twitter users were left outraged by the statement, as they asked why he would put others most at risk from the severe side effects of the virus in jeopardy.

One said: “I have severe lung fibrosis as a result of sarcoidosis. I’m extremely vulnerable to the virus. I have l limited lung function but wish everyone would wear a mask, like I do whenever I go out. What’s your excuse for putting me at risk?”

Another replied: “My son who was on a leukaemia ward caught COVID 19 on his ward in hospital. It put him into Intensive Care. He was 13 and is no longer with us. This is not about you. It is about protecting the elderly and vulnerable. Be thankful that you cannot know my anger about your words.”

However, others agreed with Laurence as they claimed that the science behind the protection rate of masks was still “unproven”.

A user responded: “Some of us believe they do more harm than good. ‘The science’ is unclear and unproven.”

While a second wrote: “I’ve got one but have only worn it once, the rest of the time wearing a mask. I get terrible anxiety wearing masks & feel like I’m going to pass out when I have it on above the nose (so I normally wear it under my nose, when at least i can breathe a bit). Masks are bad for health.”

The actor was previously married to Doctor Who star Billie Piper before they split in 2016.

At the time he discussed his mental health, and said that their marriage break-up had left him feeling “suicidal”.

As of late, Laurence has been focusing on leading his political party Reclaim, which seeks to “reclaim” British values from politicians.