Home » Celebrities » Larry Kudlow: Middle-class is getting 'slammed' by inflation

Larry Kudlow: Middle-class is getting 'slammed' by inflation

Despite a big stock market gain today after hugely volatile trading, the Dow swung roughly 1,500 points down and then up, the fact remains: The consumer price report came in far worse than expected in its final pre-election reading.

There was a big stock drop on the news, short covering seemed to take over for the rest of the day. That kind of volatility is an unhealthy sign. Caveat emptor. Whatever the reasons, I think the outlook for stocks and bonds is a very precarious one in the months ahead.

Meanwhile, the inflation arithmetic was very bad. Overall, CPI is up 8.2% for the year. Core, excluding food and energy, up 6.6%, that core rate is the biggest rise since August 1982. Numerous signs of strong and broad-based price pressures throughout the report.

The Cleveland Fed's median CPI, it's a very useful indicator, its expenditure weight is the exact 50th percentile of all price changes, well, that rose by 7% year-on-year. It continues to rise steadily month after month. 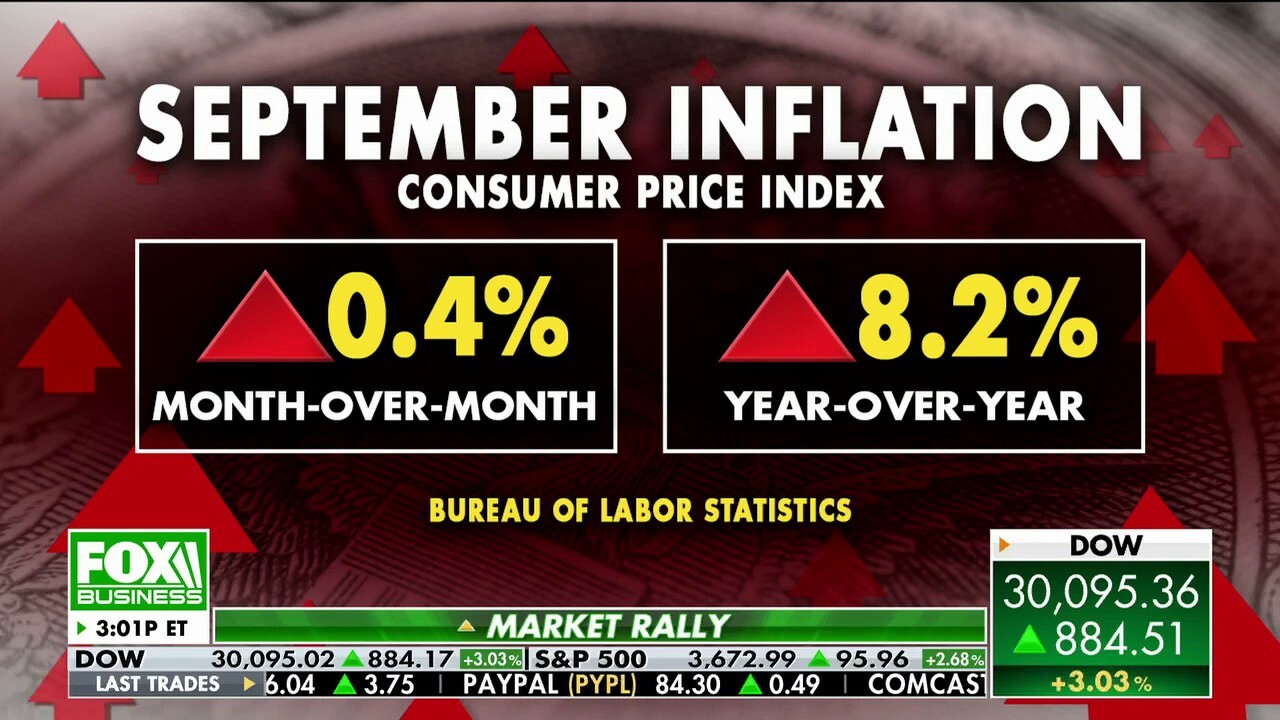 September CPI ‘clearly indicates’ inflation will be around much longer: Nancy Daoud

Now, looking under the hood of the CPI, grocery prices are up 13% on the year, food prices up 11%, shelter up 6.6%, now used car prices fell 1.1% in September — but car parts are up eight-tenths, insurance up 1.5%, maintenance and repair up nearly 2% all for the month. It's going to cost you a lot more to keep that car on the road and, oh, by the way, new car prices up seven-tenths for the month.

Meanwhile, medical care services up a point for the month. Overall services up 7.4% for the year, take out energy — still up 6.7%. While it's quite true that goods prices have calmed, but behind the rise in services — and this is a key point— is the wage component, OK? With the Atlanta Fed wage tracker up 6.7% for the year, people forget the importance of rising wages in these service prices. It's a major part of the ongoing inflation problem. Now I apologize, I hate to bore everybody with all of these numbers, but factoids are important. I know that's a novel idea, but they're important.

Meanwhile, some more real median weekly wages since January 2021 are down 5.5%. Real hourly wages have fallen 18 straight months with the latest yearly read dropping 3.8%. In other words, working folks are losing big-time. Their wages are rising, but inflation is rising more. This continues to be the soft underbelly of the Biden economy. Middle-class folks are getting slammed by higher prices, but if you think that the inflation arithmetic is bad, the monetary arithmetic is just as bad — maybe worse.

True enough, the Fed is knocking out 75-basis point rate hikes, with more to come in November and December, and probably into next year. If it were up to me, I'd be doing full percentage hikes. Just rip that Band-Aid off, pour some cold water on the cut and it will heal, but there is still a huge pool of excess money out there. That's what the Fed has failed to deal with.

Bank reserves growing $3 trillion, twice as much as the pre-pandemic. So called, "Reverse Repurchase Agreement," as the Fed drains money every day then it puts it back at night, anyway that's running $2.6 trillion. That's like nine times the mop-up operation pre-COVID.

The Fed says they're running off bonds $95 billion a month, but in reality, they're not. In the past four months, they've only taken down $164 billion. It should be twice as much. Not enough. The overall balance sheet is just shy of $9 trillion. Pre-pandemic — $4 trillion.

If inflation is defined as too much money chasing too few goods, we can still have way too much money. That is the key problem. It's driving up prices, driving up wages and driving down living standards.

I spoke briefly with Art Laffer today, who will be on the show tomorrow, and he said the Fed should just let interest rates seek their own level, while the central bank just mops up the excess money. How about that?

Now, last point: One way to absorb excess money is to produce more goods, but we are not. The Biden socialists have been on a spending tear. Not a production tear, a spending tear.

The CBO just repriced student loan cancelation at $400 billion. The actuals will actually probably be $500 billion up to a trillion. The semiconductor bailout bill was almost $300 billion. The so-called "Inflation Reduction Act" could wind up with $800 billion in renewable tax credits. The budget deficit has been re-upped to $1.4 trillion this year. Business taxes raised, stock market taxes raised and the regulatory war on fossil fuels and business in general continues.

Biden's blaming Saudi and OPEC, when all he has to do is unleash production. There's a very novel thought. Biden says inflation is coming down, but his spending keeps going up. Instead of work effort, we have an end to workfare and work requirements. Instead of incentives to grow the economy, we have racial justice and ESG boards proliferating throughout the federal government.

You know what? The best racial justice I can think of is growing the economy by 5 or 10% coming out of the recession. After the successful Trump tax cuts, please remember, minority unemployment crashed, poverty crumbled and inequality declined. Now that's racial justice.

Growth is good. Growth will soak up excess money. Supply-side growth will make the Fed's job much easier. The Fed is no angel. They supported all this crazy federal spending and of course they're in denial about the inflation problem until just recently.

Now, last point: The election's in a couple of weeks. Inflation's still the number one problem. Inflation, economy, crime. I do believe the Biden Democrats are heading for a whooping. They deserve it. Socialism never works. The cavalry is coming.

This article is adapted from Larry Kudlow's opening commentary on the October 13, 2022, edition of "Kudlow."