Home » Celebrities » Kate Middleton recalls what motherhood was like when George, Charlotte and Louis were tiny babies

Kate Middleton recalls what motherhood was like when George, Charlotte and Louis were tiny babies

The Duchess of Cambridge has recalled what it was like with a young Prince George, Princess Charlotte and Prince Louis as she spoke with a young mother at a baby bank.

READ: The one rule Prince William and Duchess Kate gave Prince Louis at the Jubilee Pageant

The royal was visiting the Little Village hub in Brent, which offers clothes, toiletries, toys and buggies to parents that are in need. She spoke to one young mum, Sara, who shared with Kate the support that the centre had given her when she was pregnant with her first child during the coronavirus pandemic.

Leaning down to greet Sara’s two children, who are aged 18 months and three months, Kate exclaimed: “You forget how tiny they are! I remember those days. It’s a busy time but so wonderful.“

She also made a reference to her youngest child, Louis, four, as she toured around the centre when she came across a pair of baby shoes. “Louis did fit in those once!” she said.

During her tour, she also helped Sara pick out some books for her children and recommended the classic, We’re Going on a Bear Hunt, which she revealed was a favourite amongst her own brood. 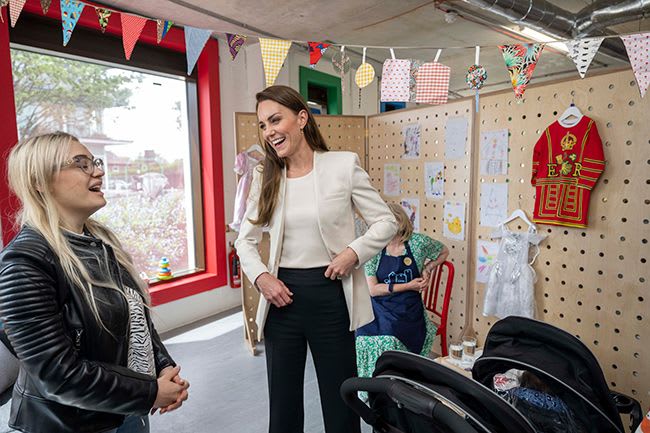 Kate spoke with Sara during the trip

Sara had high praise for the Duchess, saying she was “very kind, very sweet and very lovely”. She added: “She made everything very easy for me and I’m very happy that I met her.”

During her tour, Kate learned how the centre provided support for parents of children aged up to five-years-old not only with items, but also with linking parents to key services, like those that deal with mental health.

The mum-of-three was shown around by Sophie Livingstone, the chief executive of Little Village. She also met volunteers including celebrity hair stylist John Frieda and Ryan Prince, the founder of residential rental company Uncle, which offered the charity space at no cost. 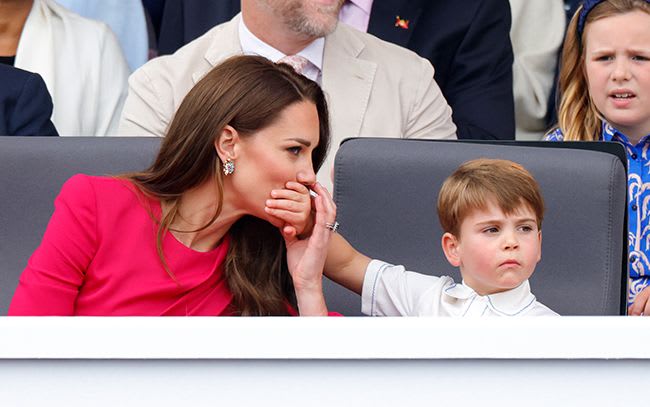 Kate was a busy mum during the Jubilee

Kate had a busy time with her own children during the Platinum Jubilee celebrations and during one moment of the parade, she was seen subtly scolding her daughter who felt compelled to intervene when Louis was waving a little too animatedly.

INSIDE: Royal kitchens that dreams are made of

SEE: Princess Charlotte is the new hair queen – check out her plaits!

In the clip from Sunday’s events, Kate was seen saying: “Charlotte, yes I know.” Louis had also tried to casually lie back and put his feet up on Charlotte’s lap, however, the young Princess was unimpressed and shoved Louis’ leg off of her.

Little Louis had made headlines for pulling a series of faces. He was even spotted covering his mum Kate’s mouth when he sat in the royal box – much to the world’s amusement.

Make sure you never miss a ROYAL story! Sign up to our newsletter to get all of our celebrity and royal news delivered directly to your inbox.