To mark her middle child’s special day, the Duchess of Cambridge shares photos of her royal daughter which had a massive smile on her face that she took in Norfolk.

AceShowbiz -Catherine Middleton has shared new pictures of Princess Charlotte to mark her 7th birthday on May 2. The Duchess of Cambridge, who also has 8-year-old Prince George and 4-year-old Prince Louis with husband Prince William, photographed her middle child cuddling the family’s beloved pet, cocker spaniel Orla, and holding daisies in one of the adorable snaps taken in Norfolk.

The 40-year-old royal chose a beautiful backdrop of bluebells and Charlotte, who had a massive smile on her face in each of the pictures, even matched her sweater to the Spring blooms.

Photographer Catherine regularly takes pictures of her children to mark special occasions. In the summer of 2021, the royal released a photograph of Charlotte holding a butterfly to raise awareness of the UK’s Big Butterfly Count initiatives.

Catherine took the adorable snap of her daughter studying the beautiful wings of the Red Admiral while taking part in the Big Butterfly Count in Norfolk. A tweet on the Duke and Duchess’ Twitter page read, “We wanted to share these beautiful Peacock and Red Admiral butterflies as part of Big Butterfly Count initiatives taking place across the UK.”

“Butterfly Conservation are encouraging us all to count these incredible creatures because not only are they beautiful creatures to be around but they are also extremely important,” the tweet continued. 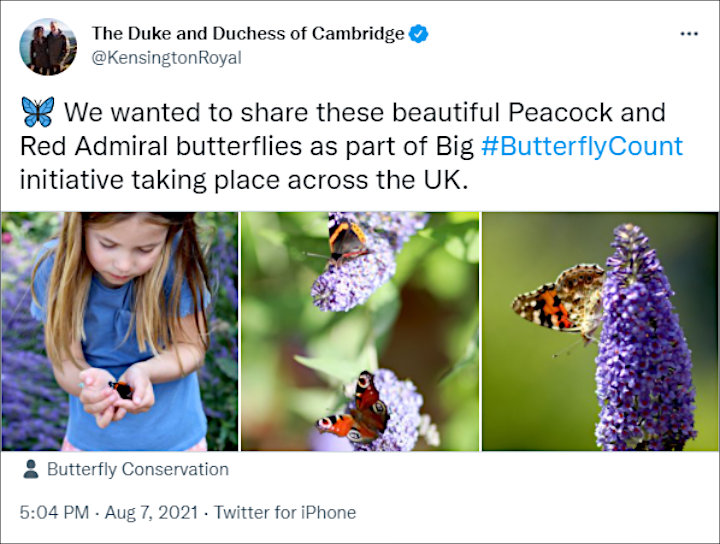 The Duke and Duchess of Cambridge shared photos as part of Big Butterfly Count initiatives.

Butterflies are a firm favorite in the Cambridge household, as Prince George celebrated his first birthday with a visit to the Sensational Butterflies exhibition at London’s Natural History Museum in 2014.

Meanwhile, around the time of Charlotte’s 6th birthday, 39-year-old William revealed his little girl claims “she’s 16” whenever someone asks her age. The Duke of Cambridge admits his daughter is very confident and joked she is already a teenager. He said, “If you ask her, she says she’s 16 … Charlotte says, ‘I’m six now, I’ll do what I want’ … They grow up very fast.”