President Joe Biden and first lady Jill Biden had their momentous first meeting with Queen Elizabeth II on June 13 — and reportedly, the POTUS fumbled some royal protocols, per the Daily Mail. Biden would not be the first U.S. president to do so, however. With the Independent calling Donald Trump’s two 2018 faux pas with Her Majesty “the most memorable of any meeting of a British monarch and US president for 70 years,” the 45th president first failed to bow and courtesy upon greeting the queen in 2018. Furthermore, he stood up at one point and obstructed the monarch’s path, forcing Elizabeth, then age 91, to circle around as he stood still.

Two of America’s most well-liked ex-FLOTUSes, Michelle Obama and Jackie Kennedy, also committed so-called violations of royal protocol. Obama, per the Independent, gripped the queen in a tight hug in their 2009 meet-and-greet, which the monarch was quick to return. Obama later described in her book “Becoming” how she and Elizabeth had bonded that day over their painful choices of shoes. Jackie’s meeting didn’t go over so warmly, per most accounts. Reader’s Digest confirmed that the depiction of awkward tension between her and Elizabeth on “The Crown” was true to real-life events, as a “paranoid” Jackie confided later to Gore Vidal that Elizabeth purposely didn’t invite divorcees to Jackie’s welcome dinner “as a plot to do her down.”

Who knew such drama could arise from a standard head-of-state meet-and-greet? Well, read on for Biden’s own alleged offenses in 2021. 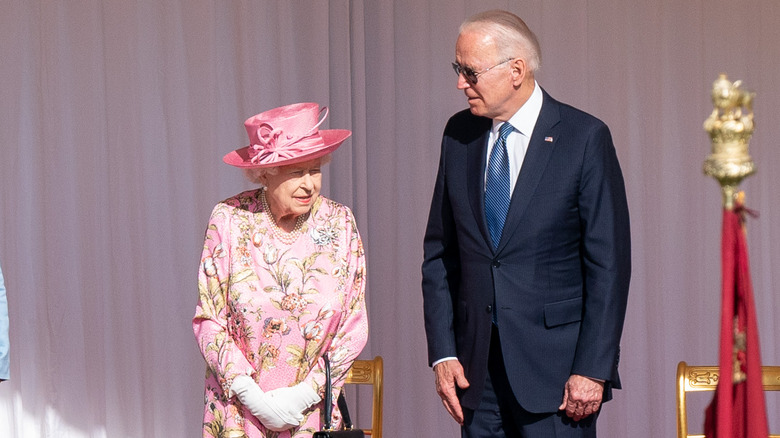 Loose lips sink ships! At least, this was one of the purported violations of British royal protocol by President Joe Biden at his first meeting with Queen Elizabeth II on June 13. As royal commentator Richard Fitzwilliams told the Daily Mail, Biden shouldn’t have disclosed the contents of their meeting to reporters, according to royal tradition, as he did at Heathrow Airport later. Telling inquiring journalists they “had a great talk” and calling the queen “very generous,” Biden said Elizabeth “wanted to know what the two leaders that… I’m about to meet with, Mr. Putin, and she wanted to know about Xi Jinping.” Although Biden offered no specifics, Fitzwilliams noted that it’s still “a rule that an audience with the Queen is strictly private and to reveal its contents is a breach of trust.” The royal expert told the Daily Mail, however, “The Queen is supposed to have told Michelle Obama that royal protocol was rubbish.”

A more glaring breach of protocol (and general etiquette) was Biden not removing his sunglasses upon greeting the queen, as Grant Harrold, the former butler to Prince Charles and Camilla Bowles-Parker, told Newsweek. (He did so midway through his formal welcome ceremony.) “I get the sun might have been shining in his eyes but the queen didn’t have sunglasses on. Jill, the First Lady, didn’t have sunglasses on,” Harrold fairly pointed out. Take notes for next time, Joe!