A viral mob that led a #FireGinaCarano campaign successfully got her ousted from the hit Disney+ series on Wednesday after she shared a post on Instagram that compared the current political divide in America to the animosity that led to the persecution of Jews in Nazi Germany.

Lucasfilm, which is owned by Disney, said in a statement obtained by Variety that Carano was “not currently employed by” the company.

Fans and defenders of Carano took to social media and pointed out various examples of hypocrisy, from a tweet by her “Mandalorian” co-star Pedro Pascal that compared Nazi concentration camps to American migrant housing facilities to Disney’s ongoing business ties with China even as the Beijing government imprisons Uighur Muslims in concentration camps. The studio even thanked officials from the province of Xinjiang, where the camps are located, in the end credits of “Mulan.”

Amid the online battle, a tweet that defended Gunn and knocked Carano caught the attention of the filmmaker. 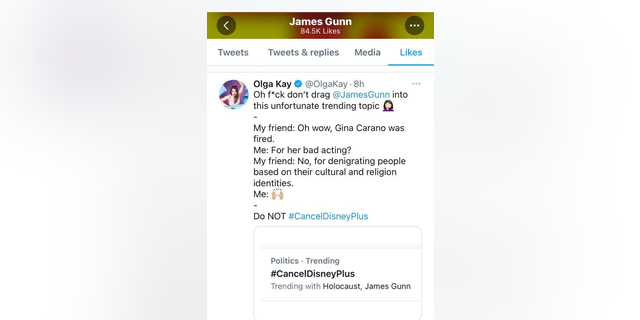 “The best thing about being raped is when you’re done being raped and it’s like ‘whew this feels great, not being raped!’” Gunn wrote in another.

“The Expendables was so manly I f–ked the sh*t out of the little pussy boy next to me! The boys ARE back in town!” he joked in a 2010 tweet. 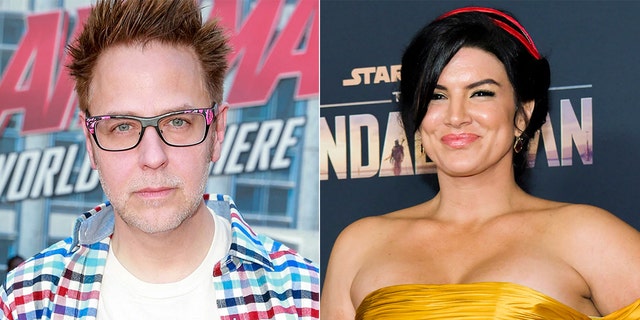 Gunn explained at the time that his tweets were attempts of being “provocative” and “taboo” and that he repeatedly expressed regret for them over the years. However, Disney fired Gunn from directing “Guardians” amid public uproar, though he was later reinstated as the Marvel film’s director in March 2019. The film is currently scheduled to be released in 2023.

Representatives for Gunn did not immediately respond to Fox News’ request for comment.