Alec Baldwin’s wife turned her eldest daughter’s dramatic encounter with a staple into a teachable moment about bravery by stressing that being brave does not mean you cannot show emotions.

AceShowbiz –Hilaria Baldwin definitely knows how to turn a minor incident into a life-lesson moment for her children. After her eldest daughter Carmen “went into shock” from being stapled in her finger, the wife of Alec Baldwin revealed what she told the younger girl about bravery in the hope to normalize “being brave.”

On Thursday, April 22, the 37-year-old posted a series of Instagram Stories that offered a recount of her daughter’s mishap. In the first Story, she showed off the staple that was initially stuck in her little girl’s finger. “So Carmen got a staple in her finger today and we had to go to the dr to get it out,” she wrote over the image.

“She went into shock and her mind really separated from her body,” the “Mom Brain” podcast host continued in the next Story. She then detailed that her nearly-8-year-old daughter started to calm down as soon as the doctor removed the staple. 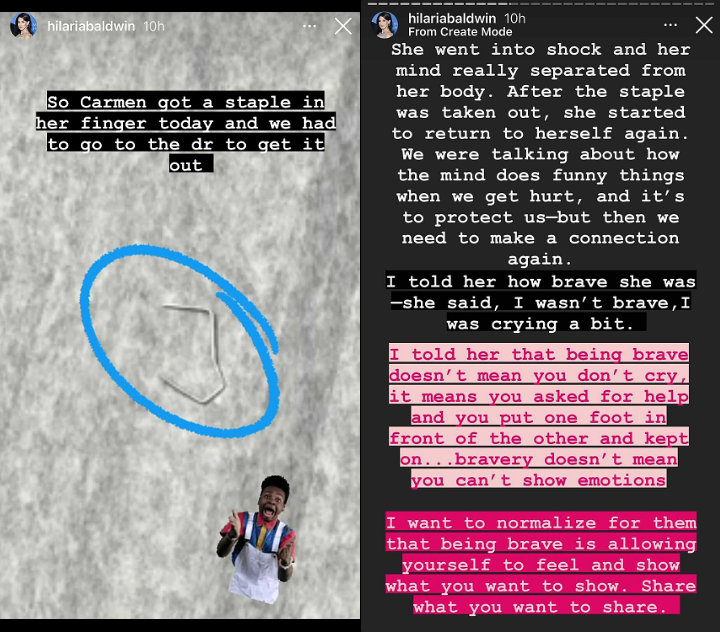 Hilaria Baldwin turned a minor incident into a life-lesson moment for her children.

“After the staple was taken out, she started to return to herself again,” the “Living Clearly Method” author went on to state. “We were talking about how the mind does funny things when we get hurt, and it’s to protect us – but then we need to make a connection again.”

When her daughter refused to be called brave since she “was crying a bit,” the yoga guru used the scary experience to teach her a life lesson.”I told her that being brave doesn’t mean you don’t cry, it means you asked for help and you put one foot in front of the other and kept on … bravery doesn’t mean you can’t show emotions,” she recalled.

In addition to Carmen, Hilaria shares five other children with her husband Alec Baldwin. The two are parents to 7-week-old Maria, whom they recently welcomed the baby via surrogate, and four sons, 5-year-old Rafael, 4-year-old Leonardo, 2-year-old Romeo and 7-month-old Eduardo. The “30 Rock” alum is also the father of 25-year old Ireland Baldwin, whom he shares with ex-wife Kim Basinger.