Two of today’s best-known comedians are both nuts about cars. Jay Leno and Tim Allen have a long history of talking cars whenever they get together, and Leno recently visited Allen’s personal garage for his show Jay Leno’s Garage. While things started off nicely, the duo began reminiscing about a burnout challenge they did back in 1995. Since Allen won that time around, Leno wanted another chance to win. 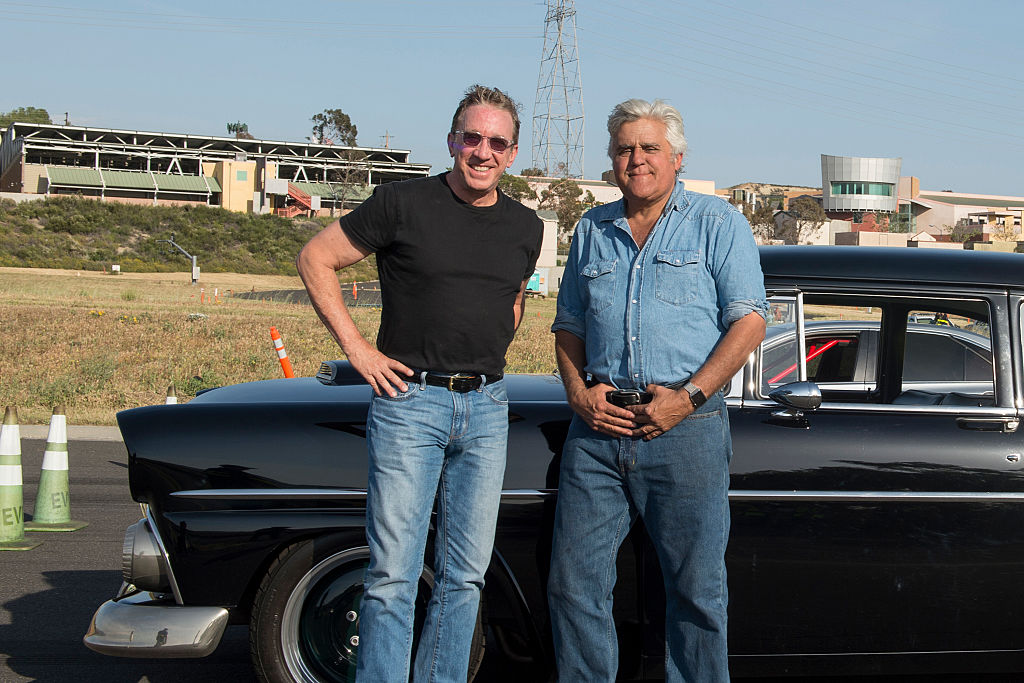 Now THIS is the Zoom background you've been looking for 😂 Host a meeting straight outta Jay Leno's Garage! #JayLenosGarage #zoomzoom

RELATED: How Much Is Jay Leno’s Car Collection Really Worth?

First starting as a web series for NBC.com, then later picked up by CNBC, Jay Leno’s Garage features cars from Leno’s own personal collection of vehicles, as well as cars owned by other celebrities that Leno visits and interviews on the show. Leno began shooting the series just a few months after ending his tenure as host of The Tonight Show in 2014.

Jay Leno’s Garage has surprised many with guest appearances by celebrities that people may not have known were into cars. In season three, Leno visited President George W. Bush’s ranch, where they discussed pickup trucks, according to IMDb. Actor Chris Evans appeared in season four to show off his 1967 Camaro. Leno talked Corvettes with Caitlyn and Kendall Jenner in 2016, and Ferraris with rock legend Sammy Hagar. Clearly, Leno made plenty of connections in his Tonight Show days.

RELATED: How Does Jay Leno Decide Which Cars to Buy for His Obsession?

In a February episode of Jay Leno’s Garage, Leno visited Allen’s personal car collection. Although the two comedians have been friends for years, Leno stated that this was the first time he had been to Allen’s garage. The two walk around to different cool cars in Allen’s collection, including a 1965 Shelby Cobra worth about $1.8 million, a 1962 Chevrolet Bel Air that Allen says is one of his favorite cars ever, and a 1966 Ford Mustang GT 350H that Leno can’t help but admire.

The two then discuss an episode of The Tonight Show from 1995, when Leno challenged Allen to see who could do a burnout the longest. Allen won back then, and Leno challenges him to a rematch — this time in cars of equal power.

Leno and Allen each get behind the wheel of a 2015 Dodge Challenger SRT Hellcat. What happens next is less of a competition and more like two guys just having fun doing burnouts in muscle cars. Allen and Leno take off in their cars and drive circles around each other, burning out their tires the whole time, never getting around to declaring a winner. The segment ends when police cars pull up and “arrest” the two actors for causing so much ruckus.

The YouTube comments section couldn’t get enough of Allen and Leno talking cars together. Many people pointed out that they would make fantastic hosts of the famous car show Top Gear and multiple people thought that if they had hosted Top Gear USA, the show would be even better. One user declared, “They need a show together. Anything with cars in it.” We can’t help but agree.

Fans loved the way they each bounced jokes off of each other, never taking things too seriously. During the burnout challenge, Allen wore a helmet that said “Jay sucks” and Leno wore one that said “Tim sucks.” A show with these two car lovers would be hilarious, and this episode is proof of that. The Twitter account for Jay Leno’s Garage recently shared that more from Allen and Leno would be coming our way soon, and we can’t wait to see what other challenges they get into.

Related posts:
What was Richard Herd’s net worth when he died?
Jimmy Fallon Is Getting a Sh*t Ton of Backlash for Wearing Blackface on ‘Saturday Night Live’
Popular News
Coronavirus symptoms: Main symptoms to spot signalling either a cold, flu or COVID-19
26/10/2020
Man Utd wonderkid Ramon Calliste, called ‘the next Giggs’, now owns luxury watch business and makes £5m a year – The Sun
26/03/2020
Megan Thee Stallion Addresses Criticism Over Twerking: ‘I Love to Shake My A**’
26/03/2020
Police guard shops to stop coronavirus panic-buyers and enforce social distancing – The Sun
26/03/2020
Coronavirus: Good Morning Britain’s Dr Hilary reveals ‘game-changing’ self-testing kit
26/03/2020
Recent Posts
This website uses cookies to improve your user experience and to provide you with advertisements that are relevant to your interests. By continuing to browse the site you are agreeing to our use of cookies.Ok