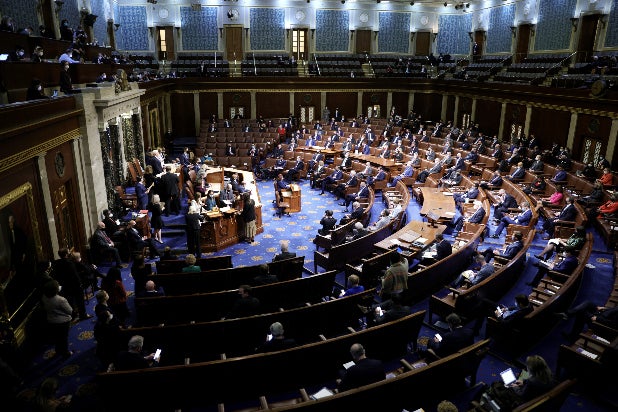 Several GOP congressional representatives refused to comply with metal detector scans at the Capitol barely a week after the building was ransacked and looted by a violent mob incited by Donald Trump, calling the scans “unconstitutional” and “communist.”

The situation at the Capitol is being reported on by national political journalists at the scene including the Huffington Post’s Matt Fuller and CNN’s Manu Raju — and the internet reaction is, unsurprisingly, fear and disgust.

Both reporters tweeted Tuesday evening they observed many Republican representatives refusing to walk through the metal detectors or even finding ways to go around it.

Some Democrats commented on the issue including New York City representative Grace Meng. “As we speak, my colleagues from the @GOP party of ‘law and order’ are literally blowing past the @CapitolPolice, talking back to them and refusing to go through the metal detectors installed today to protect us from them. Yet another way they are endangering our lives,” Meng said Tuesday evening.

Meng’s fellow NYC Congresswoman Alexandria Ocasio-Cortez was quick to point out the hypocrisy: “All these GOP ‘pro-police’ slogans were never actually about [sic] safety,” she said.

New York Magazine contributor Yashar Ali pointed out the hypocrisy in so-called “pro-law and order” representatives refusing a scan — “Again, this is the just comply/law and order/back the blue crowd,” he noted.

The metal detectors were installed to protect everyone inside the halls of congress, but GOP representatives are claiming the scans make them feel like “prisoners” and that they’re somehow unconstitutional. Even Representatives who are on record supporting metal detectors in other places, like schools, are somehow making the argument that they’re not appropriate in Congress. Fuller reported that GOP party member and Idaho representative Russ Fulcher “just pushed his way through. He went through the metal detector, set it off, ran into a cop, and then pushed his way past her.”

“60 Minutes” correspondent Wesley Lowery said in response to Fuller’s tweet that the congressman in question was likely committing a crime by doing that — “So he arguably assaulted a police officer rather than comply with a lawful order. Hmm,” Lowery said.

“Moments after VP Pence asks House Dems to ‘work together’ to ‘lower the temperature’ of the nation, a number of House Republicans pick a culture war fight over having to walk through metal detectors to get into the very Capitol building that was breached six days ago,” Lowery added.

Check out more reactions below.

Related posts:
‘Sex And The City’ Stars Are Raking In More Than $1 Million An Episode For Revival
Border wars tipped to rage on for at least six months
Popular News
‘The Bachelor’: Anna Accuses [SPOILER] Of Being An Escort After She Wins Matt Over On A Group Date
26/01/2021
Man Utd wonderkid Ramon Calliste, called ‘the next Giggs’, now owns luxury watch business and makes £5m a year – The Sun
26/03/2020
Megan Thee Stallion Addresses Criticism Over Twerking: ‘I Love to Shake My A**’
26/03/2020
Police guard shops to stop coronavirus panic-buyers and enforce social distancing – The Sun
26/03/2020
Coronavirus: Good Morning Britain’s Dr Hilary reveals ‘game-changing’ self-testing kit
26/03/2020
Recent Posts
This website uses cookies to improve your user experience and to provide you with advertisements that are relevant to your interests. By continuing to browse the site you are agreeing to our use of cookies.Ok