‘It’s different and weird!’ Ant and Dec host Saturday Night Takeaway from their living rooms after filming was halted amid coronavirus pandemic

Ant McPartlin and Declan Donnelly presented the latest Saturday Night Takeaway from their living room as the nation remains in coronavirus lockdown.

The presenters, 44, introduced a compilation of some of the show’s best moments from their homes, and said from the start ‘it was different and weird’ to their usual live show.

Ant and Dec introduced the show after last week’s Saturday Night Takeaway went ahead without an audience, as COVID-19 forced many shows to halt filming. 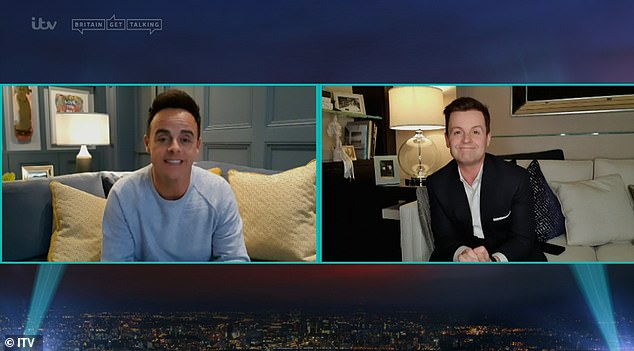 Changes: Ant McPartlin and Declan Donnelly presented the latest Saturday Night Takeaway from their living room as the nation remains in coronavirus lockdown

Opening the show, Dec was suited and booted for the occasion, saying: ‘Hello and welcome to a very different very weird Saturday Night Takeaway.

Ant didn’t get the memo about the Takeaway dress code, as he appeared on screen in a comfy jumper. 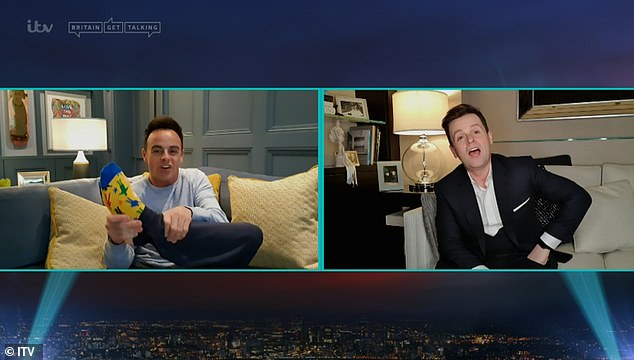 This is new! The presenters introduced a compilation of some of the show’s best moments from their homes with Dec also poking fun at Ant for failing to wear a suit for the occasion 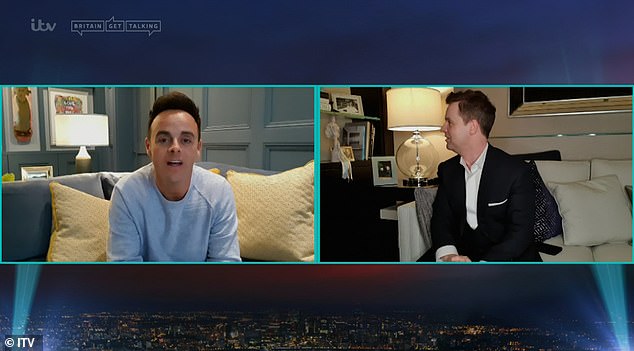 Go and change! Dec ordered his presenting partner to don a suit for the rest of the show, before introducing a repeat of the 2015 game Fifty Shades Of Dismay

Complaining he told Dec: ‘I’m in my comfies, like the rest of the country watching this show, I’ve got me special socks on!’

But Dec insisted: ‘We realised we were just gonna be staying at home tonight, so we thought why don’t we just watch it together and have a laugh at the same time?

‘Now go and put a suit on – honestly you can’t get the staff!’ 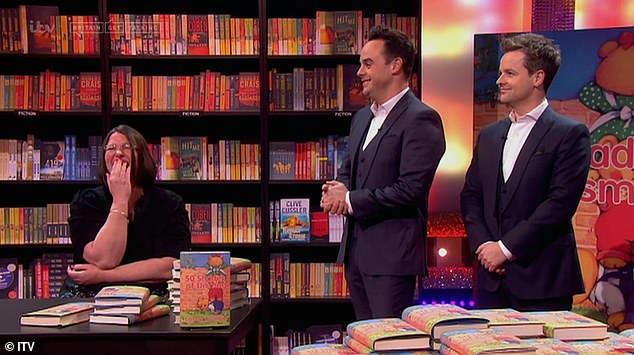 Hilarious: The sketch featured Ant and Dec reading the diary of one of their audience members, after it was ‘published’ as a nationwide bestseller 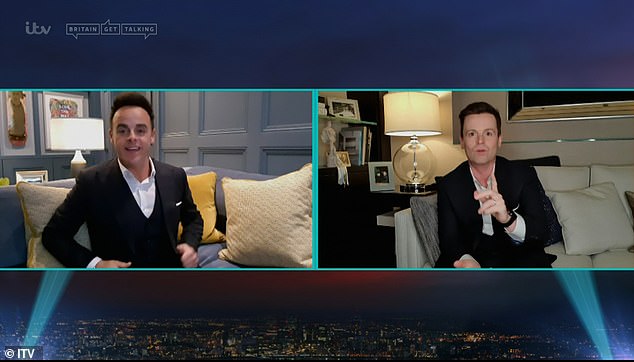 Quick change: After Ant donned his suit, Dec insisted that he apply makeup to hide his ‘shiny forehead,’ before introducing a reprisal of the sketch I’m A Celebrity Get Out Of Me Ear

As Ant disappeared to change, Dec then introduced the first segment, which was a repeat of the 2015 game Fifty Shades Of Dismay.

After the break Dec continued to nitpick Ant’s appearance, by asking whether he had applied makeup to his ‘shiny forehead.’

The star then disappeared yet again, leaving Dec to introduce I’m A Celebrity Get Me Out Of Me Ear featuring Richard Madeley. 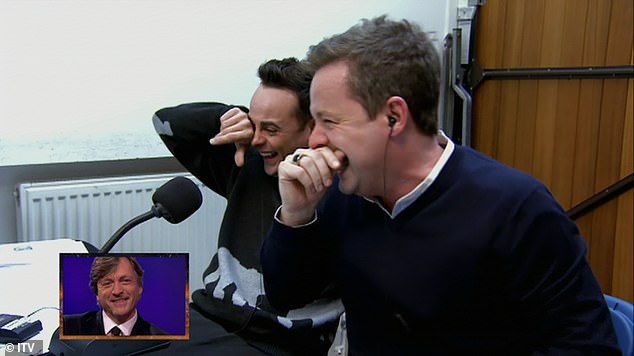 The Best Of! Ant and Dec were left in hysterics when they tasked Richard Madeley with doing everything they asked

On Friday Ant and Dec revealed their plans to host Saturday Night Takeaway from their respective homes, after last weeks live show went ahead without a studio audience.

The Geordie duo, both took to Instagram to share a video call as they spent time in their separate homes amid the ongoing coronavirus crisis.

In the fun video, Ant called up best pal Dec to see how he was doing and when his co-presenter asked what he was up to he responded: ‘Not much, isolating, it’s all the rage you know.’ 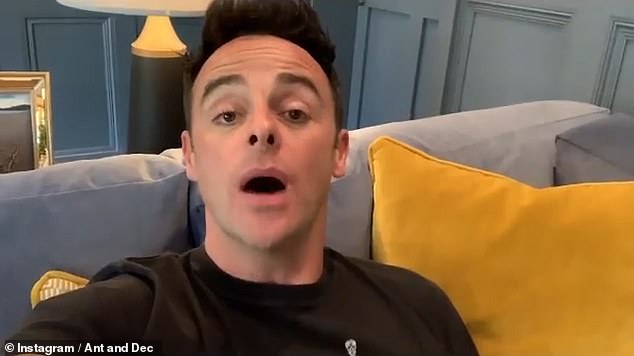 At home:On Friday Ant and Dec revealed their plans to host Saturday Night Takeaway from their respective homes

To which Dec said: ‘Everybody’s had it, I feel weird not being in studio getting takeaway ready for the weekend. What’re you going to do Saturday at 7 o’clock?’

Teasing their potential new format, Ant went on: ‘I’m going to do what the rest of the country are doing, ordering a takeaway and watching takeaway.’

Dec said he would be getting a curry while Ant said he wanted to get Thai, and his pal joked that he had ‘changed’ given his culinary choices.

Getting back to the point, Ant went on: ‘I know, tell you what if we’re both going to be watching it why don’t we watch it together with the rest of the country. Do the show on telly from both our houses.’ 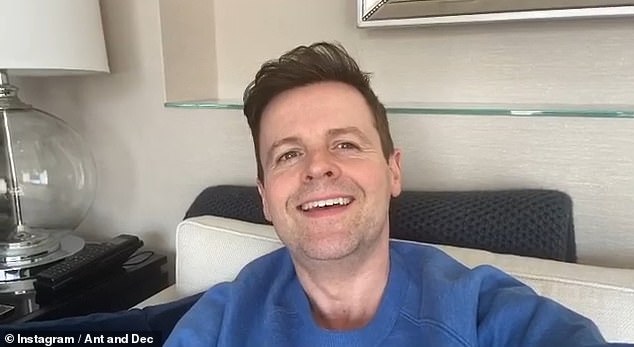 Plans: In an Instagram clip, the presenting duo revealed they were still going to be involved in the pre-recorded show

Sharing his excitement, Dec donned a suit as he went on: ‘Hell yea let’s do it, i’m going to wear a suit and everything.’

Rather than film live from the studio, the week’s edition of Saturday Night Takeaway will feature a segment sharing their best bits of the show.

The episode will also see the final part of the ‘Men In Brown’ be aired on screen, while the rest of the scenes in the studio have been pre-recorded, and at 8, In For A Penny will air with host Stephen Mulhern at the helm.

Last Saturday, Ant and Dec hosted the show without a studio audience for the first time in its history, with musical guest Olly Murs making a guest appearance after replacing Tom Jones. 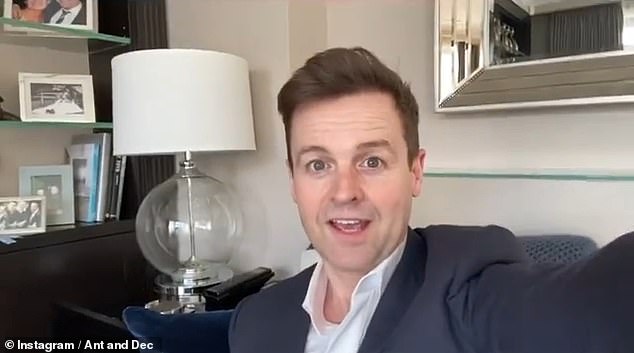 Can’t wait! Sharing his excitement, Dec donned a suit as he went on: ‘Hell yea let’s do it, i’m going to wear a suit and everything’

The COVID-19 pandemic has already wreaked havoc in the television industry, with many shows forced to halt filming, including Coronation Street, Loose Women, and BBC staples Peaky Blinders and Call The Midwife.

ITV staples Good Morning Britain and This Morning have continued with a scaled-back crew, while filming for other shows such as The Great British Bake Off have been postponed.

The Voice UK’s live semi-finals and final have also been delayed, though ITV have confirmed that the Britain’s Got Talent auditions will air next month as planned, though the live shows have been postponed until later this year. 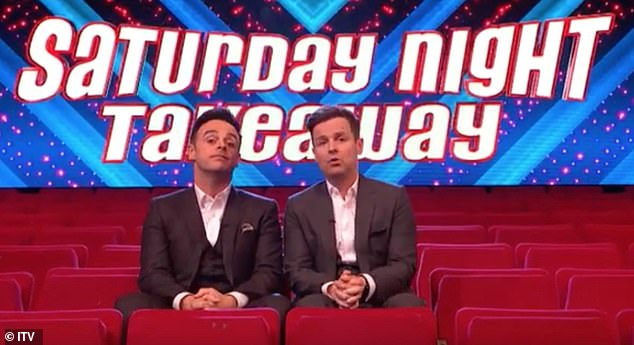 Doing it alone: Last Saturday, Ant and Dec hosted the show without a studio audience for the first time in its history