13 of the most shocking reality TV moments of 2020 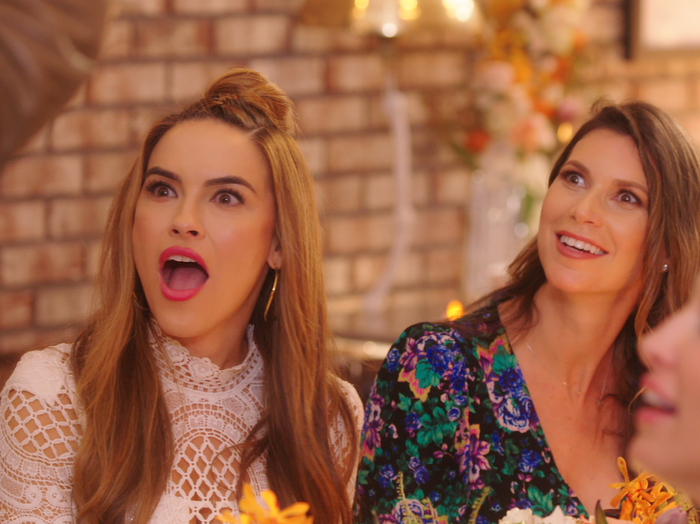 Reality TV became more important than ever this year, as many of us were stuck inside with nothing to do but watch drama unfold on our screens.

It was also affected by the pandemic: "Drag Race" had a virtual finale and the "Real Housewives" had to film confessionals in their own homes. But some of the most shocking moments on reality TV this year had nothing to do with coronavirus. Does "Tiger King" ring any bells?

Keep scrolling to see the 13 wildest reality TV moments in 2020.

Chris Harrison promises that every season of "The Bachelorette" will be its most dramatic yet, but when Clare Crawley was replaced mid-season with Tayshia Adams,he turned out to be right. 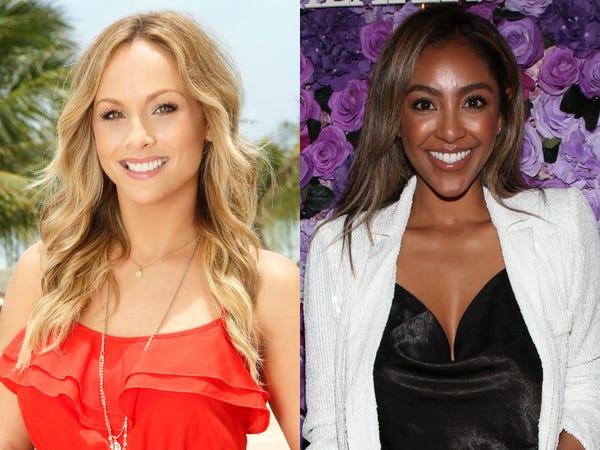 For those who are not yet part of Bachelor Nation: Normally, a lead is on the show for six to eight weeks, and during that time, they are expected to fall in love and find a future spouse. That may sound wild enough on its own, but this season had an even quicker love story.

Crawley, who finally got to be the star of the show this summer after her season was delayed due to the coronavirus, only lasted 12 days before she claimed she found the love of her life. That left producers scrambling and they only had one choice: to call in a new lead to take over just around the halfway point of the show.

That's where Adams comes in. Never before has "The Bachelor" or any of its spin-offs had to re-cast the lead because someone fell in love too fast, but it's 2020, so of course it happened this season.

You can see other shocking moments from this season here.

Watching Kourtney and Kim finally snap after seasons of tension on "Keeping Up With the Kardashians" was intense. 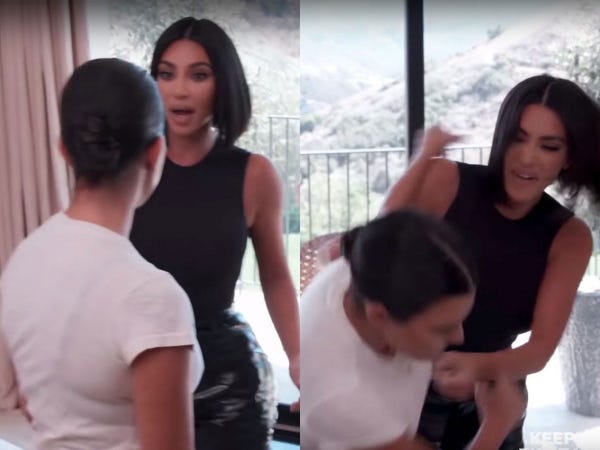 Kourtney and Kim have been fighting for years, with Kim calling her sister the "least interesting to look at," and implying that Kourtney isn't as hard-working as she is, and Kourtney saying that she's a better mother than her sister. But it all came to a head during a season 18 episode in which the two eldest Kardashians got into an actual physical altercation.

The episode aired in May — a few months later, the family revealed that "KUWTK" will end in 2021.

There were a few couples who broke up at the altar on "Love Is Blind," but none more dramatically than Damian and Giannina, who fled her wedding barefoot. 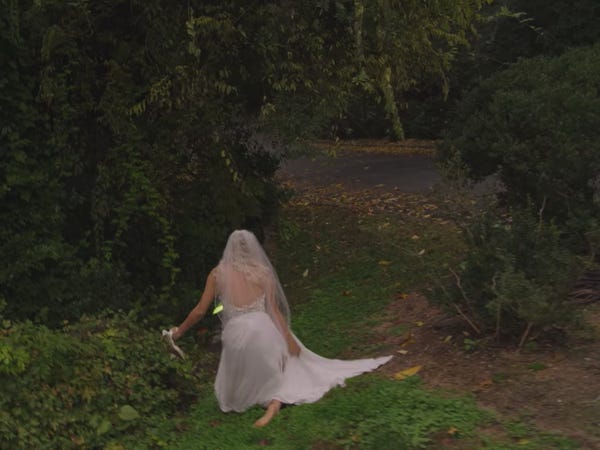 "Love Is Blind" was one of Netflix's biggest hits of 2020. The premise, which involved people speaking to each other through walls and getting engaged before ever actually meeting face-to-face, was eerily coronavirus-appropriate.

In the finale, five couples had survived long enough to make it to their wedding day, but only two actually said "I do." Jessica and Mark and Kenny and Kelly each broke up at the altar.

But Damian and Giannina's ceremony took the cake, as Damian completely blindsided Giannina and told her he didn't want to marry her. In a fit of rage, Giannina sprinted out of the ceremony, dress and all, and ran through the streets of Atlanta, almost face-planting in the grass in the process. It was must-see television.

While viewers of "The Circle" knew the entire time that Seaburn was a catfish, it was wild to watch the others find out. 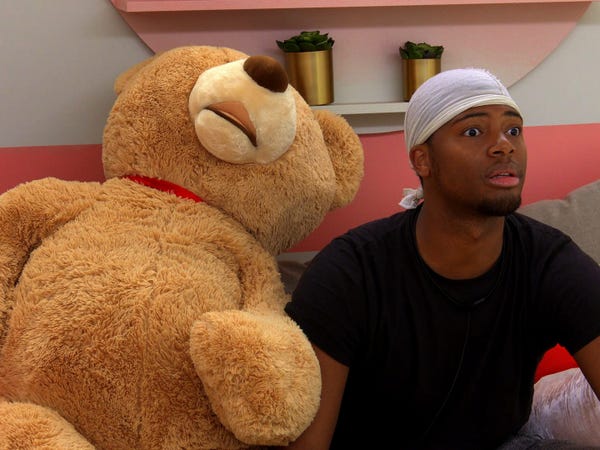 On "The Circle," another Netflix reality hit, contestants communicated with each other solely through a social media app called the Circle, and they could choose to either be themselves or "catfish" their fellow competitors and pretend to be someone else. When there were five contestants left, they were finally able to meet each other in real life, and find out if their friends had been honest about themselves.

Seaburn, who was pretending to be a girl named Rebecca and using his girlfriend's photos, was the only catfish left at that point — and seeing the reactions of each of his fellow "Circle" players was priceless.

The entire Denise Richards and Brandi Glanville saga on "Real Housewives of Beverly Hills" was impossible to look away from. 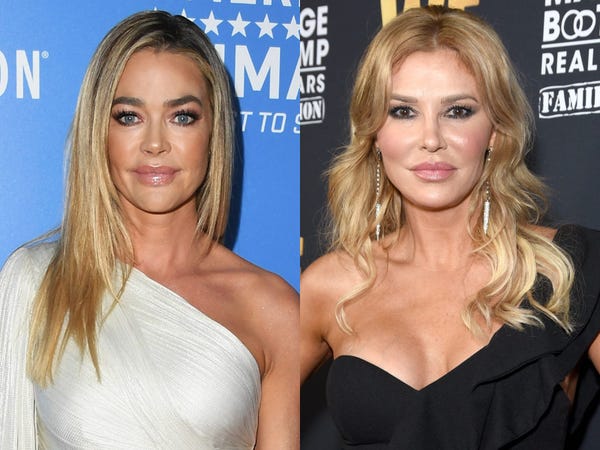 Before the latest season of "Real Housewives of Beverly Hills" aired, news broke that Richards had quit filming amidst rumors that she and former "Housewives" star Glanville had reportedly been having an affair. Glanville, for her part, claimed that Richards had told her that she and her husband Aaron Phyper had an open marriage. Richards denied the entire story.

All season long, fans were treated to the back and forth between Richards and Glanville, each claiming that the other was lying. We even got to see Richards employ a longtime rumored tactic of the "Housewives" — screaming "Bravo, Bravo, f—ing Bravo" in order to make footage unusable.

There was never any closure, and with Richards officially leaving the show, it seems like we'll never get it.

After a season of dread on "Selling Sunset," watching Chrishell Stause find out — via text — that she was getting divorced was still heartbreaking. 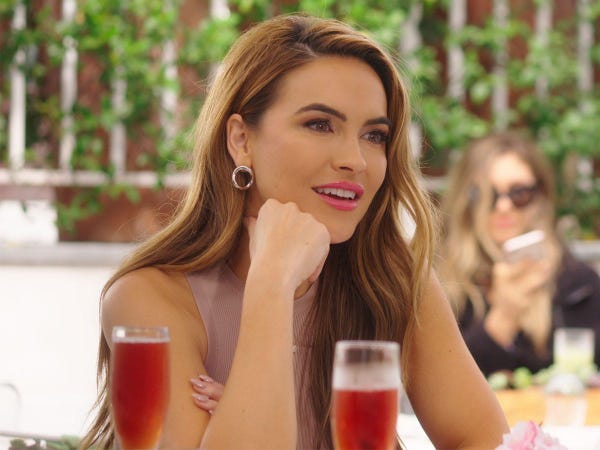 Even though the third season of "Selling Sunset" came almost a year after news that Stause and her then-husband Justin Hartley were getting divorced, it was still a gut punch to watch as Stause claimed she was in a happy marriage, only to see it all come crumbling down. Her co-workers, family, and friends all found out she was getting divorced at the same time she did, as Hartley reportedly told her via text and TMZ promptly found the documents.

Rarely do we get to see such a raw look at a reality star's divorce.

During the finale of Peter Weber's season of "The Bachelor," viewers watched in horror as Madison Prewett and his mother, Barb, traded harsh words on live TV. 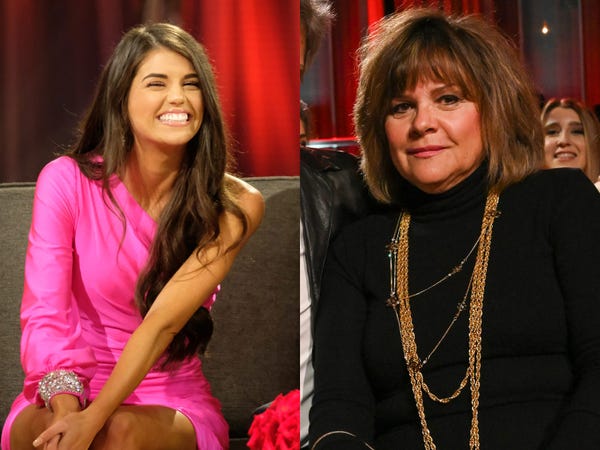 Peter's season was truly one of a kind, in that he didn't end up with his frontrunner, or his eventual fiancée — instead, he reconnected with a contestant he had actually met before he began filming, Kelley. Needless to say, the season was a mess.

However, the most jawdropping moment from the entire season came when Peter's mom Barb came at Prewett for being rude, for wasting everyone's time, and claiming that there was no way that her and Peter's relationship could work. Prewett, for her part, defended herself, which caused some people to call her disrespectful.

Who won? Well … Peter's dating a new woman who Barb is publicly obsessed with, and Prewett escaped a family that's very involved with each other's lives, so let's call it a draw.

Angelina completely lost her mind on Snooki, JWoww, and Deena after their toast at her wedding on "Jersey Shore: Family Vacation." 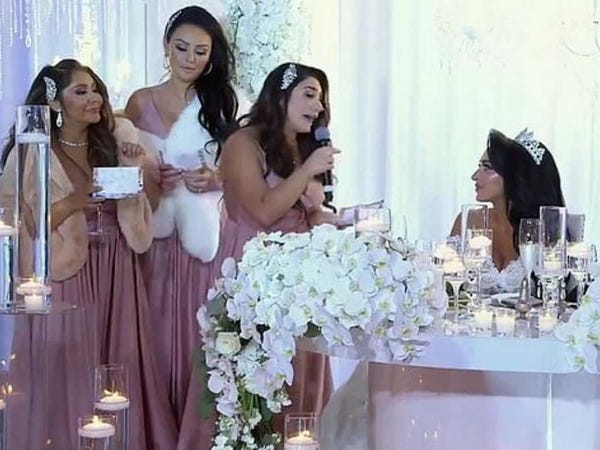 Over the summer, viewers witnessed all the drama go down at Angelina's wedding, including a toast (more like a roast) given by her "Jersey Shore" co-stars Snooki, Jwoww, and Deena. At first, it seemed like Angelina was in on the joke, but as the comments became more hurtful, it quickly became clear that she was extremely offended and upset, and the bride left her own wedding for at least an hour.

Snooki and Deena have both taken to social media to claim that they didn't even want to make a speech in the first place, and were forced to cause some drama by producers. Either way, the girls didn't speak for months, and Snooki even quit the show in response to all the drama.

Both contestants and viewers were shocked when a designer on "Project Runway" challenged Karlie Kloss by asking if she wouldn't wear a design, "not even to dinner with the Kushners?" 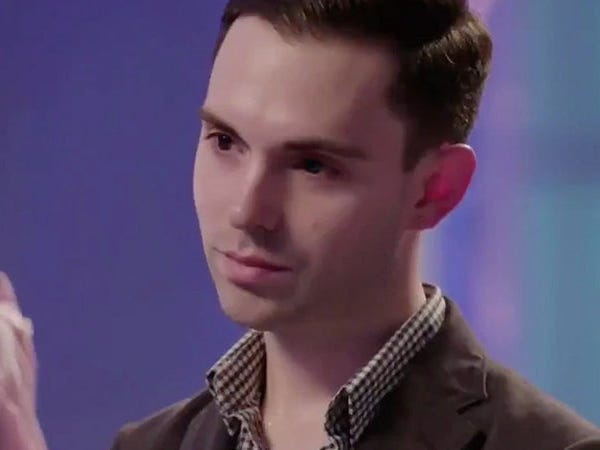 Karlie Kloss is a model and judge on "Project Runway." She's also married to Joshua Kushner, the brother of President Trump's son-in-law, Jared Kushner. However, she rarely, if ever, associates with Jared and Ivanka, but she doesn't exactly denounce them either, which some viewers have found faults with.

One such person with these complaints was Tyler Neasloney, a contestant on last season of "Project Runway." When another judge said, "I cannot see Karlie wearing it anywhere, honestly," Neasloney didn't miss a beat and responded, "Not even to dinner with the Kushners?"

Kloss was shocked, and the moment instantly became a meme.

When Mickey Rourke unmasked himself on "The Masked Singer," he broke every rule. 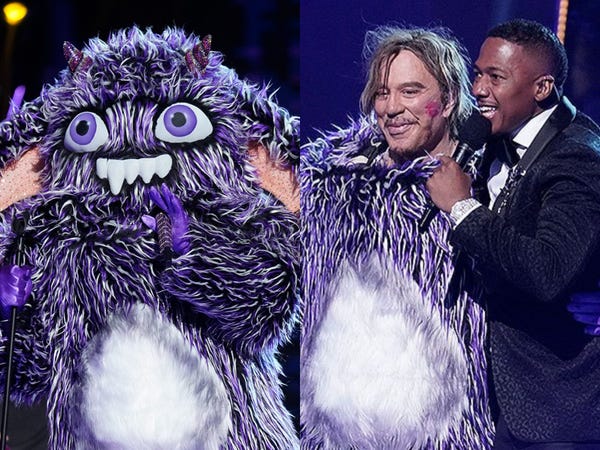 Typically on "The Masked Singer," a contestant doesn't get revealed until the end of the show, after the judges have made their (typically terrible) guesses. But Rourke, not exactly known for following the rules, decided to unmask himself because he was simply too hot underneath the Gremlin mask. We have to say — relatable.

Waiting for Daytona was one big nail-biter while watching "Cheer," but seeing Austin hurt himself during finals was genuinely shocking. 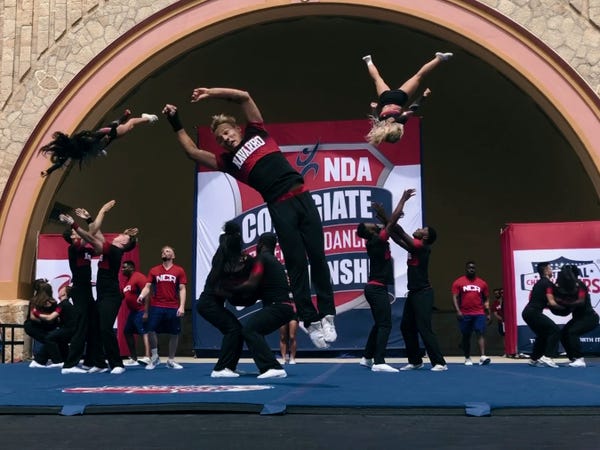 By this point, we'd seen the Navarro cheer team get injured plenty of times, but in the back of your head, it seemed like there was no question that the team would be flawless when they hit the mat at Daytona.

However, Austin, one of Navarro's stunters, landed wrong during one of the routine's flips and was unable to continue performing — and then the music cut out, the team rushed off the mats, and they were given just 30 minutes to figure out how to re-work the routine with a new person.

We won't spoil what happens, but even when you know it's coming, Austin's fall will make you grimace. 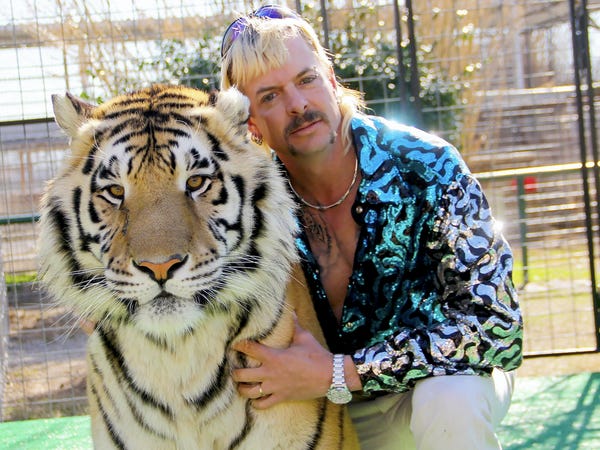 Where to begin with "Tiger King's" shocking moments?

Here's a list of genuinely wild (no pun intended) moments from the Netflix series: When you find out Joe Exotic is in jail; when there's an entire episode dedicated to figuring out if Carole Baskin killed her husband; when you find out Joe has multiple husbands; when you find out one of Joe's multiple husbands accidentally shot himself in the head; everything that has to do with Doc Antle and his harem' when you meet the real-life inspiration for "Scarface"; when you meet Jeff Lowe; when the FBI gets involved; when Joe runs for governor of Oklahoma and receives votes; and when you realize all of these people are actually real and there are thousands of lions and tigers that are legally pets in the United States.

Many reality shows had to adjust to the coronavirus pandemic, but none more successfully than "RuPaul's Drag Race," which pulled off a stunning finale. 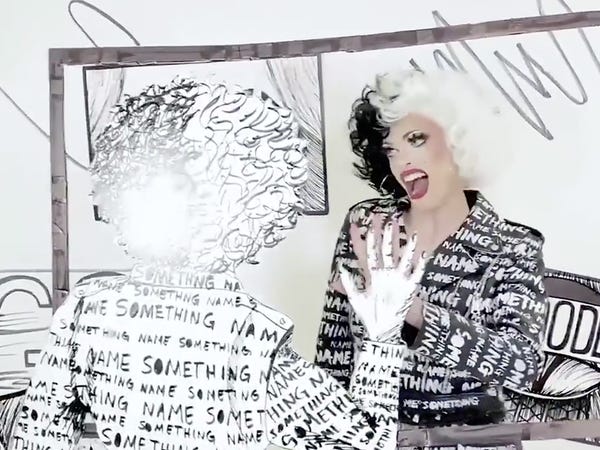 The finale of "Drag Race" was an episode unlike any before — each finalist was tasked with making their own music video at home, essentially, and it was a beauty to behold. Each queen's creativity shone through and it made us all re-think how crafty we could actually be while stuck at home. Kudos to Crystal Methyd, Gigi Goode, and Jaida Essence Hall for blowing us all away.

Related posts:
Experts renew calls for constant mask rules to be eased in Victoria
Who is Patrick Dempsey's wife Jillian Fink?
Popular News
Shop Drew Barrymore's Holiday Gift Ideas From Small Businesses
03/12/2020
Man Utd wonderkid Ramon Calliste, called ‘the next Giggs’, now owns luxury watch business and makes £5m a year – The Sun
26/03/2020
Megan Thee Stallion Addresses Criticism Over Twerking: ‘I Love to Shake My A**’
26/03/2020
Police guard shops to stop coronavirus panic-buyers and enforce social distancing – The Sun
26/03/2020
Coronavirus: Good Morning Britain’s Dr Hilary reveals ‘game-changing’ self-testing kit
26/03/2020
Recent Posts
This website uses cookies to improve your user experience and to provide you with advertisements that are relevant to your interests. By continuing to browse the site you are agreeing to our use of cookies.Ok