Home » Beauty and Fashion » You’re Not Imagining It: The Pandemic Is Making Your Hair Fall Out

You’re Not Imagining It: The Pandemic Is Making Your Hair Fall Out

Many doctors report an uptick in patients suffering from stress-related hair loss. Here’s what to do about it. 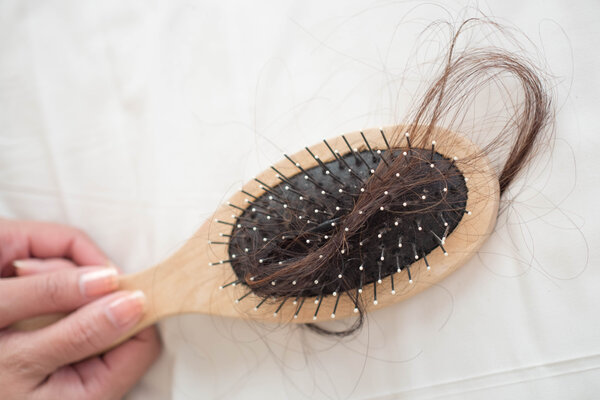 With every month that passed in 2020, Samantha Hill’s part seemed to widen, the increasingly bald stripe of skin a representation of what she calls “a four-part terrible play” in her life. Reeling from the death of her father in January, Ms. Hill, a 29-year-old freelance photographer, had barely adjusted to her new normal when the pandemic hit and further upended her life.

After the death of a friend in June, when her hair appeared to thin even more, she created a folder on her phone titled Hairgate, featuring every selfie she’d taken in the last four years.

“I was trying to figure out where it all went wrong,” said Ms. Hill, who lives in the Williamsburg section of Brooklyn.

It’s a quandary many people, particularly women, have agonized over in recent months, as their brushes and shower drains filled with tangles of hair. Google searches for hair loss increased by 8 percent in the last 12 months, according to the data science firm Spate, with the topic being searched an average of more than 829,000 times a month in the United States.

The phenomenon is not all in our heads, according to experts, but is another frustrating byproduct of both immense stress and post-viral inflammation from Covid-19. Known as telogen effluvium in the medical world, temporary hair loss results from fever, illness and severe stress, pushing more hairs than normal into the shedding phase of the hair growth life cycle.

Although hair loss tends to be associated with men because of the prevalence of male-pattern baldness, telogen effluvium is more common among women, who often experience it after childbirth.