When the Parking Lot Is Its Own Strange Trip

Parking lots outside Grateful Dead shows were the stuff of lore, and that tradition has continued with Dead & Company, the post-Jerry Garcia incarnation of the band featuring John Mayer.

This summer, as the band tours the United States, the party outside the show is alive and well, though depending on location, each has a unique flavor. In New York City, when you’re exiting the subway at Citi Field, you can see Shakedown Street — as the legendary lot scene is known (named after a 1978 album by the Grateful Dead) — across from the stadium.

For a show in Boulder, Colo., you’re on a college campus. In Saratoga Springs, N.Y., at the Saratoga Performing Arts Center, you’re in a state park on grass in the woods by cornfields. 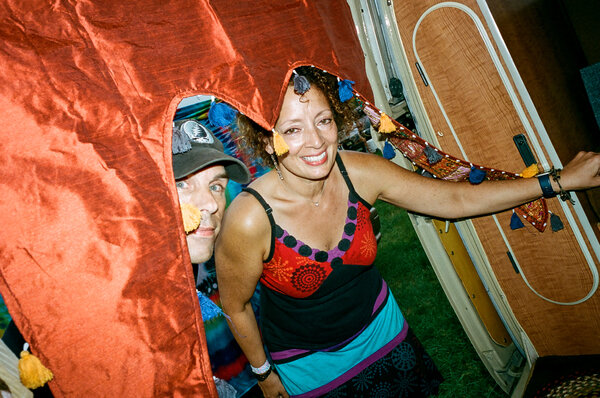 On Aug. 27 and Aug. 28, the photographer OK McCausland captured the culture outside two shows: in Saratoga Springs and at Hershey Park in Hershey, Pa.

When I see these pictures, I like to close my eyes and imagine I’m walking from my old Volvo station wagon to a huge open field, with row after row of colorful VW vans, R.V.s and buses. People young and old, sitting atop or just next to their vehicles, as if the lot is their front lawn. Some play music, others play games or barbecue or do anything else one can imagine while tailgating to see their favorite band.

Strangers stop strangers just to say hello when a smile is exchanged. It’s electric and contagious. The lot is like the greatest outdoor flea market in the world, with vendors all selling your favorite stuff, whatever that may be. Often the stuff finds you — things you didn’t even know you were looking for.

Everyone seems to know each other, and no one looks out of place. It’s not about what they wear; it’s how they wear it. The style is captivating.

I’m drawn to people that have been wearing a T-shirt that’s seen hundreds of shows. I call it “worn in,” not worn out. Maybe it has holes from a joint or just from wear, and fits the body like a second skin.

One of the most beautiful things about Dead style to me is that it oozes authenticity. Fans may be wearing their favorite shirts, but they don’t appear dressed up in costume. They are in uniform. A group of people who wear the clothes rather than the other way around. Everyone looks so comfortable and familiar to one another, like family. (There is a lot of biological family, too: grandparents, parents and children.) Young and old, they bring style.

Until a few years ago, you’d have to be there or have a friend bring you back a T-shirt or sticker, but thanks to Instagram the lot has grown.

As you’re outside the show, whether in person or online, you may be looking at a vendor who’s been traveling in the scene for 50 years or a 15-year-old wearing his father’s old T-shirt; sometimes it’s hard to tell the new from the old. And inside the venue, the band plays on.

Mordechai Rubinstein is the author of “Dead Style: A Long Strange Trip Into the Magical World of Tie-Dye.” OK McCausland is a photographer in New York City.