Trigère, a well-known American fashion label in the mid-to late-20th century, will be relaunched today as a made-to-order e-commerce business.

Since late 2018, Trigère Operations Ltd., which acquired the Trigère trademark and intellectual property that year from the late Pauline Trigère’s family, has been working with VIP clients. Now it is taking the business to a wider audience at Trigere.com.

“We were working with VIP and friends of the maison, and there was a phenomenal learning experience,” said Franklin Benjamin Elman, Trigère‘s creative director. “When you’re dealing with people, there’s a great deal to learn. We learned what they want and what they needed for their wardrobes. They come to Trigère because they want to wear designs that elevate them and give them a certain ‘je ne sais quoi’ when they walk into a room,” Elman said.

Elman found that women and fashion connoisseurs still have an emotional connection to the Paris-born Trigère, who started her business in 1942 and won the first of her three Coty Awards in 1949, when she expanded from custom dresses, suits and coats to  women’s ready-to-wear. In 1961, Trigère became the first name designer to use a Black model in a fashion show and in 1993, she received the Lifetime Achievement Award from the Council of Fashion Designers of America. In 2001, she received the French Legion of Honor. 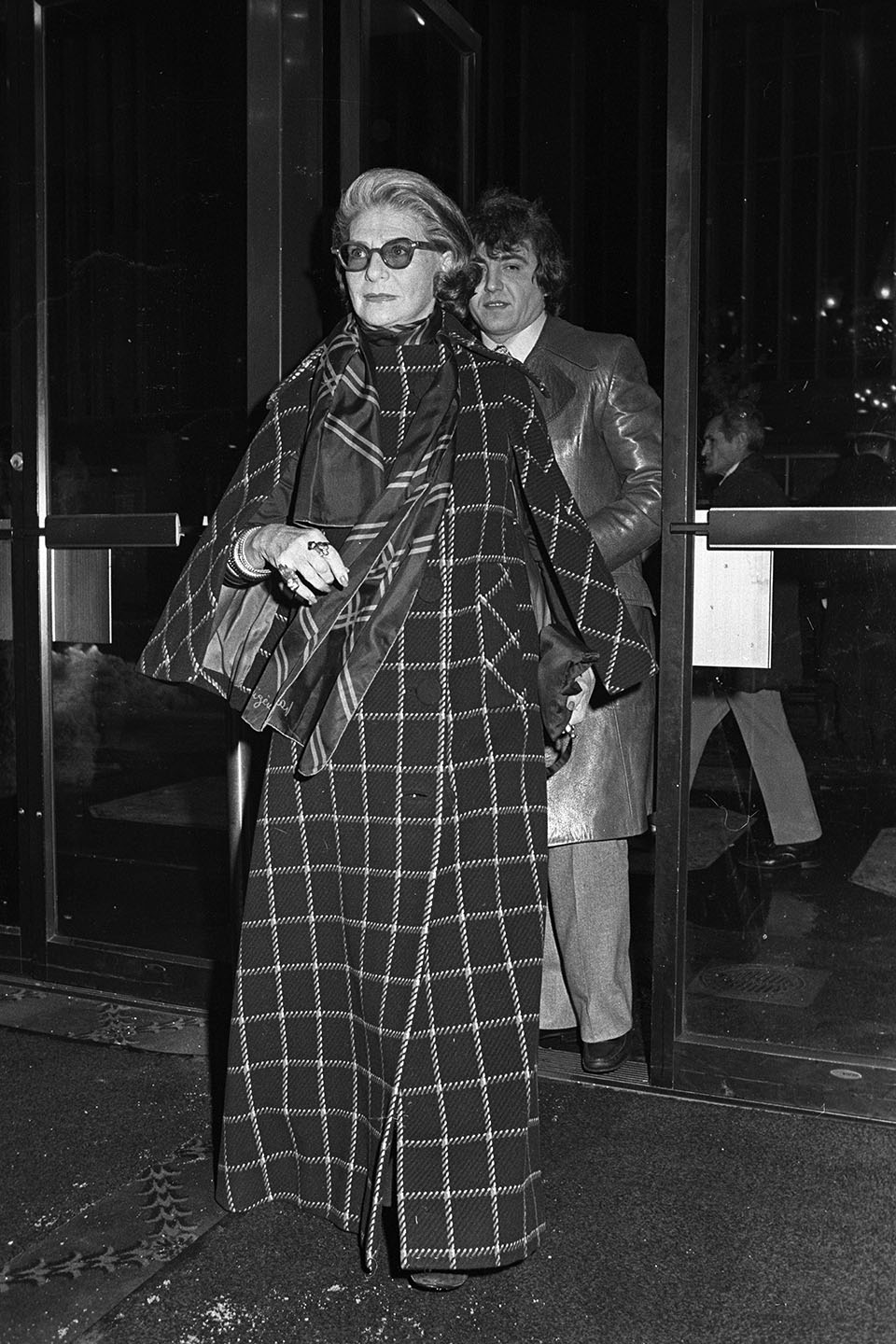 Pauline Trigère in a floor-length windowpane plaid coat at a screening of “The Day of the Dolphin” at the New York Ziegfeld Theater in New York, 1973.  Peter Simins/WWD

The brand remained dormant until Elman and his business partner began reviving the house. One of Trigère‘s two sons was an attorney who specialized in intellectual property. “They had the wherewithal to protect the trademark and not do anything for short-term gain. It’s immaculate. There is nothing out there,” Elman said.

Interestingly, Trigère, told WWD in 2002 that she regretted not licensing her name. “My big mistake and regret was not to have put my name on whatever — eyeglasses, suits, jock straps if they would have done it. People came to me with deals, but I didn’t like them very much. That’s my big mistake and it was a big one.”

Elman felt that e-commerce was the perfect vehicle to reintroduce the collection. He said personal service is an important part of the Trigère tradition and there’s been Interest for the brand on a global level from the get-go. “We look forward to engaging directly with our international clientele,” he said.

The e-commerce site will offer made-to-order clothing. Part of the platform has technology that allows the customer to answer a series of questions that will identify her correct size.

Elman said he was particularly inspired by Trigère‘s designs from the 1970s, when the wealthy began to mingle with artists and rock stars. “It was a mix of classic with a touch of rebellious and the unexpected,” he said.

For the new collection, his starting point was an architectural coat that’s in the permanent collection of the Metropolitan Museum of Art. He said on the one hand, it was quintessentially Trigère, and on the other hand, it represents the present moment. The volume of the coat became a springboard for a series of dresses and tops that are being introduced. 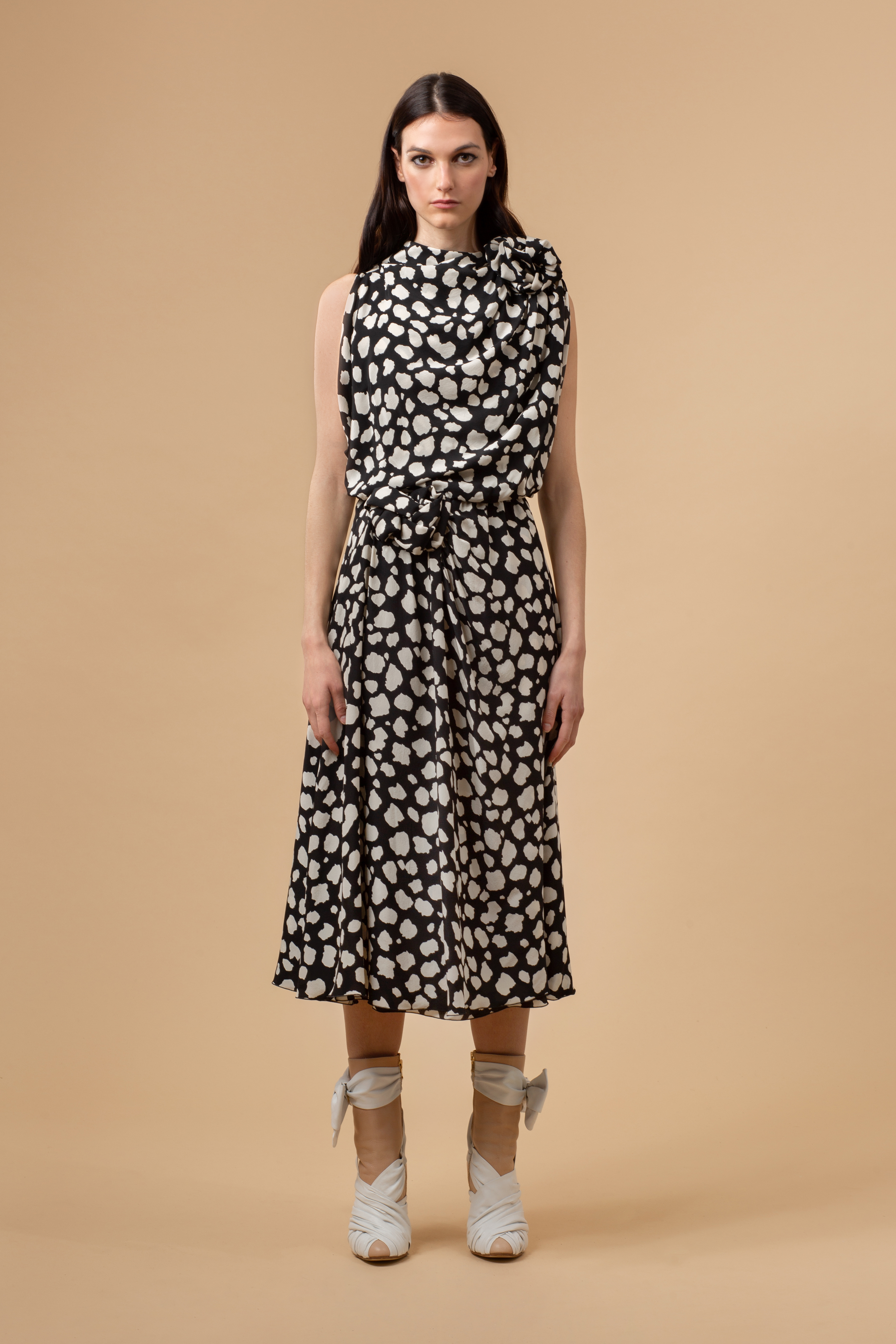 A dress from Trigère. courtesy shot.

Elman said he was also influenced by famous women with style such as Carolyn Bessette Kennedy, Georgia O’Keeffe and Diahann Carroll. “Observing these women from different times and different generations and different backgrounds, there was this interesting common denominator. They were very chic, very self-possessed women, and there are photographs of them wearing black and cream turtlenecks. It gave them this additional gravitas,” he said. 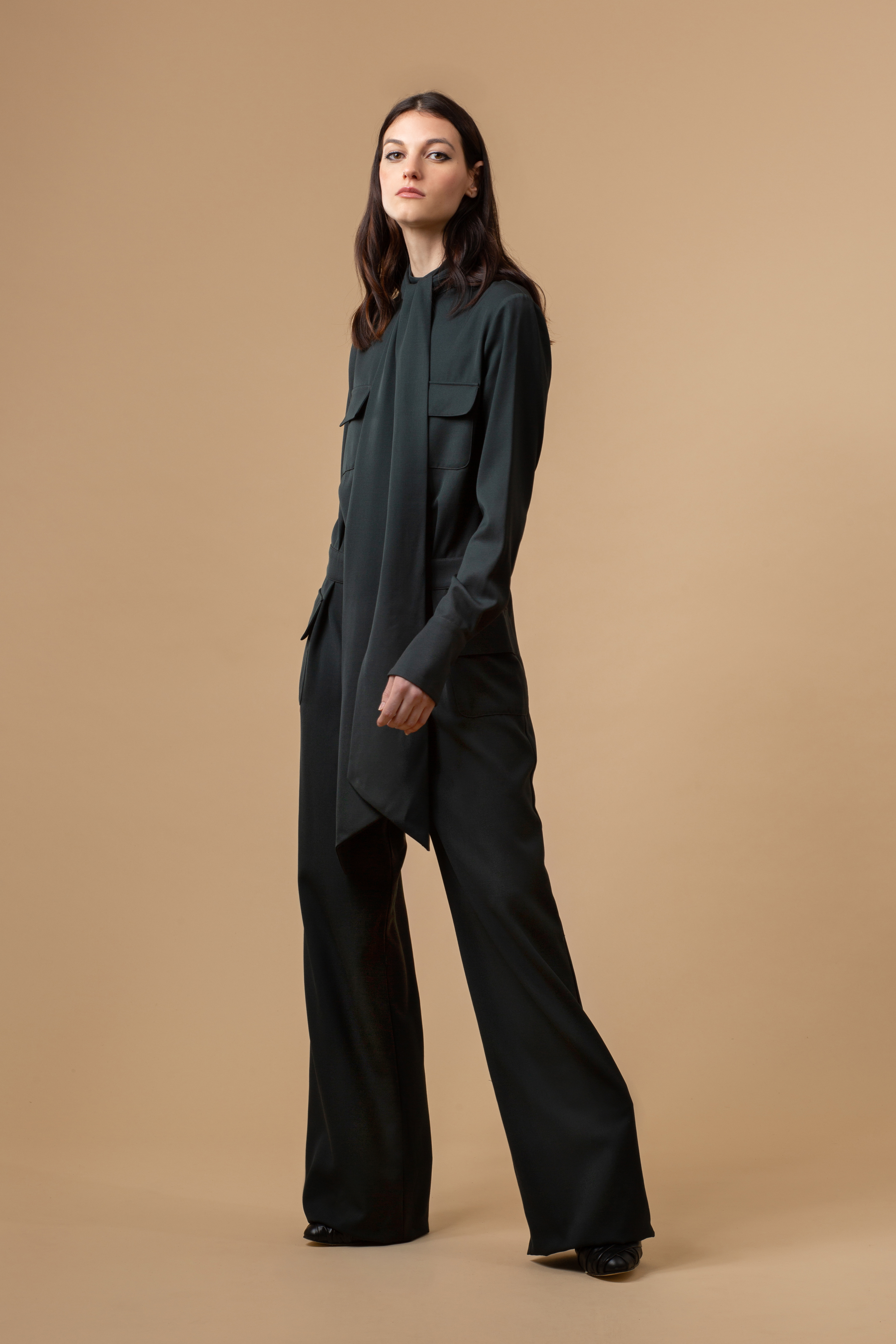 A look from Trigère. courtesy shot.

The new collection opens at just under $400 for an ethically sourced embroidered cotton top made in Italy and goes up to $3,500 for a “very chic evening dress,” he said. Everything is made in Italy and shipped from there. Shipping costs are free to the customer.

Because women’s empowerment is so much a part of the Trigère heritage, that is something that really drove the new company. All the suppliers are women-led factories. At the main factory he uses in Venice, the female owner has taken over the family tradition of making high-end rtw.

Elman lived in Europe for 22 years, working between Paris and Milan. He has worked with Raf Simons at Jil Sander as consulting director on footwear design and at Rick Owens as footwear design and product development consultant. He also interned at Christian Dior. “From them I had the extraordinary experience of learning best practices,” he said.

Trigère Operations Ltd. was established by Peter Lewis, an entrepreneur from Montreal. Elman became Lewis’ partner in the business this year. “He [Lewis] is someone who has known me my entire life,” said the Montreal-born Elman, who graduated from the Rhode Island School of Design.

For a long time, Elman was encouraged to go out on his own. “Working so steadily with so much commitment in the industry as a design director and creative consultant for so many years, people said why don’t you go out on your own? It’s something that had a great deal of appeal to me, but it’s a big step. This gentleman from Montreal eventually made a very interesting proposal and it gave me the courage to take the next step,” he said, adding that he never had the desire to have his own name on the door.

According to Elman, Trigère was “the proverbial iron fist in a velvet glove; she was a cult  of personality. Her business was 100 percent personality driven. It was inconceivable for it to go on without her.”

As reported in WWD, Trigère developed a fondness for turtles (at one point her collection totaled 500), and feuds, including one with John Fairchild, WWD’s legendary publisher. Trigère once commissioned a series of “Dear John” ads in response to a perceived slight by Fairchild. In fact, defiance and a hot temper were two of her trademarks. “I want it my way and I want it immediately,” she told WWD in September 1972. “I scream a lot.”

For the launch, Elman is introducing 20 styles. Each style will have variations in colors and materials, so overall there will be 50 to 60 stock keeping units. Sizes range from 0 to 12. It is being launched globally.

When questioned who his target customer is, whether women who wore Trigère are still around and if younger women know the name, he claims the Trigère customer never went away. He said Trigère pieces are highly collectible and fetch thousands of dollars. “Her work was so prolific and so timeless. The way her garments were constructed. She came from the couture. Her breakthrough was fusing French couture with American modernism. She was so extraordinarily ground-breaking,” he said.

Does he feel women are going to be dressing up like this again?

He believes there will be a slow burn. “They’ll ask, ‘Can I? Should I? Will I be judged?’” And then he thinks fashion will take off.  In general, his approach to design right now is that the Trigère wardrobe be timeless and seasonless. He called it “disciplined ease,” and “sophisticated simplicity” with a French couture touch. 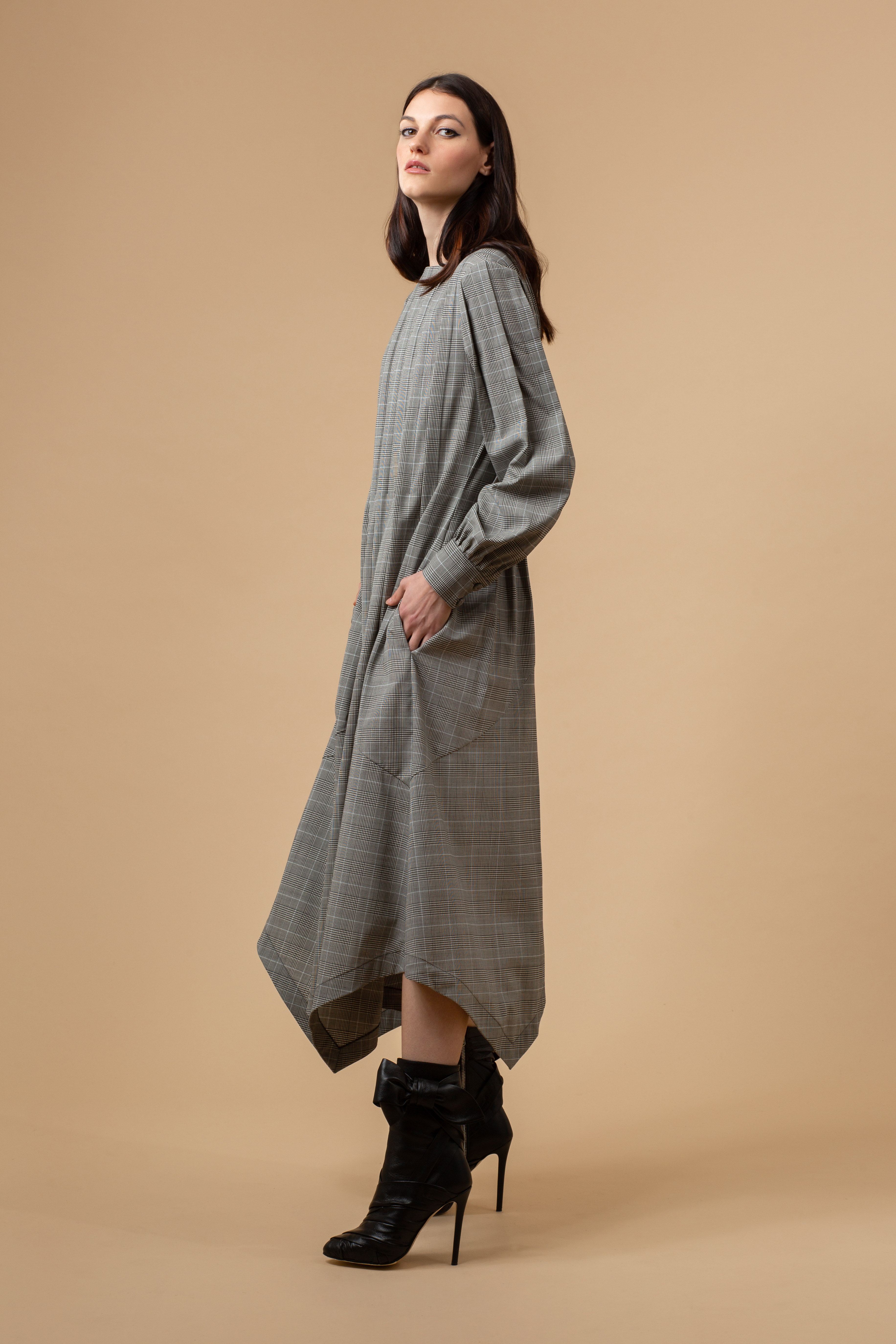 A dress from Trigère. courtesy shot.

“The strength of this collection is about the dresses and the blouses,” he said. The next phase will be tailoring and coats. He is planning to design groups of offerings three to four times a year, with limited editions and special collaborations. The client’s name will be handwritten on the label. “It’s part of the experience. It’s made for them,” he said.

Elman said they are focusing on digital, but haven’t ruled out eventually selling wholesale accounts.

To mark the relaunch, Trigère has collaborated with The Circle, a global nonprofit organization founded by the musician Annie Lennox. Fifty percent of sale proceeds from the limited-edition Trigère x The Circle T-Shirt, which sells for $400 and is crafted from ethically sourced organic cotton jersey and embroidered with the original 1942 house logo, will be donated to underrepresented communities of women who are in need of support due to the COVID-19 pandemic.

Elman said Lennox has been a source of inspiration to him as a cultural icon, a songwriter, singer and artist. They plan to promote the partnership on social media and will work with influencers to help drive the message home.

Asked whether he’s worried about interpreting Trigère for today’s customer, Elman said, “I consider Pauline Trigere the master. I’m the student. I take her legacy and the responsibility very, very seriously. These are very big shoes to fill. It’s a joy and a privilege to work with a house with such an important pedigree, I feel very lucky,” Elman said. 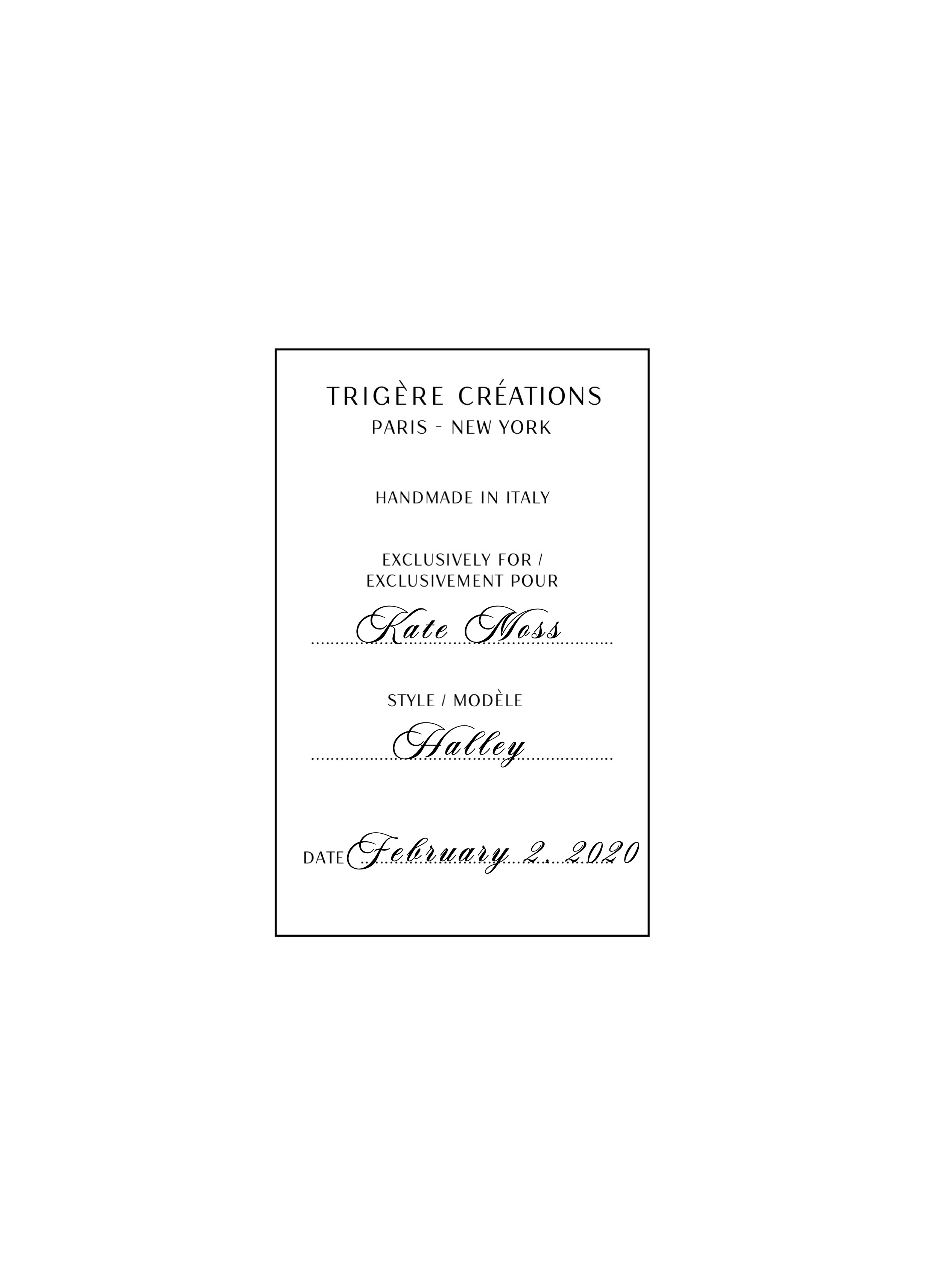 The client’s name is handwritten on the label. courtesy shot.