Around the world, the history of our present moment is taking shape in journal entries and drawings. 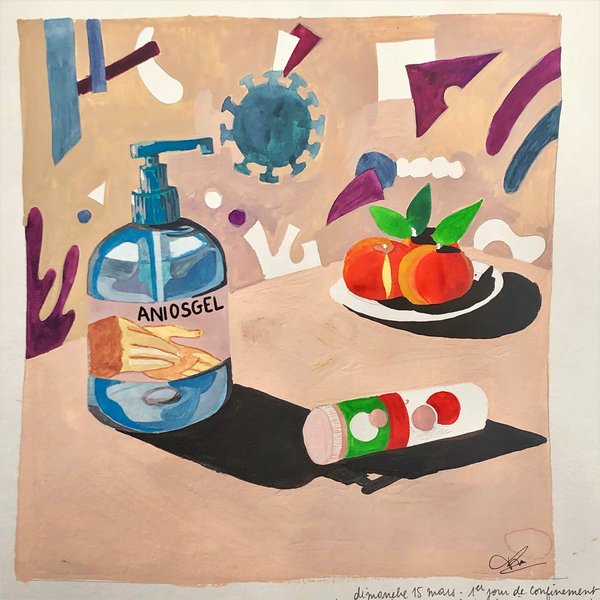 Before the end of life as we knew it, Ady, an 8-year-old who lives in the Bay Area of San Francisco, read a biography of Anne Frank.

When she realized that she, too, was living through what would soon become history, Ady started keeping her own diary.

In one early entry, she recorded that the judging for her county’s science fair would be conducted over the phone, rather than in person. “Not ‘fair’!!” she wrote. “Har, har, very funny.”

When Santa Cruz County enacted a shelter-in-place order on March 16, she again picked up her pen.

“I’m REALY scared!” she wrote. “Did you know this is getting so bad that I have to go my clarinet lessons on the cumputer!!”

As the coronavirus continues to spread and confine people largely to their homes, many are filling pages with their experiences of living through a pandemic. Their diaries are told in words and pictures: pantry inventories, window views, questions about the future, concerns about the present.

Taken together, the pages tell the story of an anxious, claustrophobic world on pause.

“You can say anything you want, no matter what, and nobody can judge you,” Ady said in a phone interview earlier this month, speaking about her diary. “No one says, ‘scaredy-cat.’”

When future historians look to write the story of life during coronavirus, these first-person accounts may prove useful.

“Diaries and correspondences are a gold standard,” said Jane Kamensky, a professor of American History at Harvard University and the faculty director of the Schlesinger Library at the Radcliffe Institute. “They’re among the best evidence we have of people’s inner worlds.”

History isn’t usually told by the bigwigs of the era, even if they are some of its main characters. Instead, it is often reconstructed from snapshots of ordinary lives. A handwritten recipe. A letter written by a soldier at the front. A drawing of a kitchen sink. One of the most famous works of academic history — “A Midwife’s Tale,” by Laurel Thatcher Ulrich — came from the diary kept by a woman living in Maine from 1785 to 1812. It won a Pulitzer Prize.

“The personal that is presented in diaries gives us the truth of the era,” said Carole Ione Lewis, a diarist and the author of “Pride of Family: Four Generations of American Women of Color,” which she wrote using her relatives’ diaries.

Today’s journals convey the shared experience of life in isolation.

Some diarists record statistics: the number of infections, the number of deaths. Others keep diaries that are part shopping list, part doodle pad. Unidentified phone numbers are scratched out in the margins of punctuation-less pages filled with the frustration of being separated from family and friends. Among these accounts, anxiety is the constant.

Deb Monti, a 22-year-old painter, was in Valencia, Spain, when the country went on lockdown. Confined to her apartment, she painted what she could see from her window.

“I’m looking at other people who are now trying to live their daily lives on these tiny balconies,” she said.

Now back in Pittsburgh, where she grew up, Ms. Monti is self-isolating in her childhood bedroom.

“You look at this painting of a person looking out a window and you think, like, ‘Oh, how romantic. This person is able to just daydream,’” she said. “But for me, it’s so all of a sudden. It makes me feel so suffocated and restrained.”

For some visual diarists, making new work has been a way to stay connected with other artists in isolation.

In Manila, before the outbreak, Patricia Joyce V. Salarzon, a 27-year-old production editor, would meet her friends to draw outside. Now they all agree to sketch at the same time, just to feel like they are together.

Timothy Hannem, an illustration artist in Paris, made a template for people to fill in and post on social media using the hashtag #coronamaison: corona house. A well-known illustrator, Pénélope Bagieu, shared the drawing with her Twitter followers.

They will each draw their own ideal place to be quarantined, she wrote.

Within a few days, hundreds of people had uploaded their own imagined interiors, with cats and plants and books. They started a website, too, as a landing pad for the project.

Together, the drawings make for a fantastical house, with rooms created by many, many hands.

About two weeks ago, Anna Temkina, a professor of public health and gender at the European University at St. Petersburg, realized she was living through what sociologists refer to as “emergent moment.”

“It is a moment when new rules begin to develop, but they are not yet clear,” Dr. Temkina, 59, said. “Sociologically, this was absolutely great.”

She has started project called “the virus diaries,” part of a broader effort by the university to study quarantine’s effect on daily life.

“Saturday — a normal crowd out and about,” she wrote. “I don’t notice any increased caution. People are walking without distancing; two military men shake hands; a man and woman my age greet each other with a kiss.”

In the early days of the outbreak, Annie Armstrong, a 24-year-old writer in Brooklyn, went home to Atlanta. Now her diary is filled with questions about her career, how to find meaning in her life, what she really wants.

“I really feel like I’m witnessing the fall of the empire,” she wrote. “I’m already mourning this whole little life I made for myself in New York.”

Kari Stevenson, a 34-year-old high school librarian who lives near Colorado Springs, Colo., started keeping her own quarantine journal. Writing soothes a nervous ache in her stomach, she said, even when the subject matter is anxiety provoking.

“The grocery stores are feeling the strain + shortening hours,” Ms. Stevenson wrote in a recent entry. “I am starting to worry our 14 day supply might not be enough.”

The day before public schools closed in Boston, Ari Zimmet asked his middle school students to draw how they were feeling.

Normally, Mr. Zimmet, 25, teaches woodworking. But he remembered how one art professor, in college, opened up her classroom for discussion and sketching after the 2016 election. He wanted to make room for his middle school students to do the same.

As they drew, many seemed unaffected. But one student, a boy, drew frantically. With blue and orange lines, he made frenzied marks as stick figures fell from the sky.

“He didn’t articulate his feelings, and he almost never does,” Mr. Zimmet said. “But it was like he was constructing this whole narrative with the path that his Cray-pas was taking.”

That these accounts are recorded on paper is crucial to their longevity. “People think the internet is going to be permanent, but we’re already starting to lose things that were committed to bits and bytes,” said Shane Landrum, who holds a doctorate in American history from Brandeis University. “Even with the danger of your house burning down with all your written records inside, I still think paper is valuable as a practice,” Dr. Landrum said.

The weight of a personal diary is familiar to Frank Herron, a 67-year-old book publisher who lives in Winchester, Mass. He has studied the journals his great-aunt kept in the early 20th century.

In one entry, she wrote about seeing Austrian royalty from a tailor’s window.

She was right. In a few years, in a few more diary entries, World War I would start. A few years later, the Austro-Hungarian empire would fall.

“What makes history is people who write some stuff or keep some pictures,” Mr. Herron said. “This is how we communicate across centuries.”