If the world is ending, who do you want by your side?

Nancy Townsend selected Herb Thomas: A man she met for lunch in early March, whom she FaceTimed later that month, dined with (outdoors) in April, and got engaged to the week after Easter. They married Sept. 6, 2020 at the Harriet Wetherill Park in Plymouth Meeting, Pa.

“We felt like we didn’t have time to waste,” said Ms. Townsend, 66, a widowed semiretired Salvation Army officer.

She and everyone else, apparently.

Snagging a coveted wedding license during the pandemic became more difficult than it used to be to get toilet paper, as singles have been grasping the person by their side and clinging to them for better or for worse.

Getting a marriage license in New York is now done via Project Cupid, which involves filling out paperwork online and trying to snag a virtual appointment (new spots are released Thursdays at 9 a.m.).

Historically, scary, stressful times have led to increased marriage rates. Following South Carolina’s Hurricane Hugo, marriage rates increased in the areas affected by the hurricane (these numbers had previously been trending downward). After the 9/11 attacks, the marriage rate didn’t change but couples were less willing to get a divorce: the number of couples in New York who filed for divorce decreased by 32 percent. It was a similar situation in Japan after the 2011 tsunami.

The pandemic was no different. According to an October Brides’ survey of 4,000 engaged couples, 82 percent said that living through the pandemic has made them even more eager to get married so they could weather this — and other storms — together. Fifty-five percent said the pandemic changed their expectations for marriage, and they’re prioritizing their relationship above anything else.

It’s not surprising, said Rebecca Haney, a licensed professional clinical counselor in Cincinnati. When you’re scared, anxious or overwhelmed, you feel out of control. Your body and mind are experiencing sensations you don’t know how to manage, Ms. Haney said.

“So to compensate for this feeling, people tend to find other ways to feel in control,” she said. “This is why some people make big changes or major decisions during times of fear.”

Getting married during a pandemic feels like a guarantee of safety and stability, said Nick Bognar, a licensed marriage and family therapist in Pasadena, Calif.

There’s also the idea that if your relationship could survive the pandemic, then it could survive anything. Couples have been stuck inside for small spaces for months, under major duress.

“This year has been the ultimate test of a relationship, so I’ve seen couples who come to me for an engagement ring and say, ‘Well, if we still love and respect each other after being cooped up together during the worst nine months of our lives, then we know he or she was the one,’” said Michelle Demaree, who helps couples shop for engagement rings through her site, Miss Diamond Ring. Ms. Demaree said she has had a 20 percent increase in engaged couples contacting her about purchasing engagement and wedding rings since the pandemic began.

“I have seen some couples that have met during the pandemic and haven’t known each other that long, but who are getting engaged now,” she said.

New Yorkers may have attempted to get married during the pandemic, but many were unsuccessful thanks to a delay in marriage licenses being issued in the city, combined with the onslaught of couples wanting them.

Jocelyn Voo, a 38-year-old photographer at Everly Studios, attempted to get a marriage license online in May in Manhattan, but the earliest appointment she could get was in September. She ended up getting married Nov. 6, 2020, on the front steps of the New York Public Library. 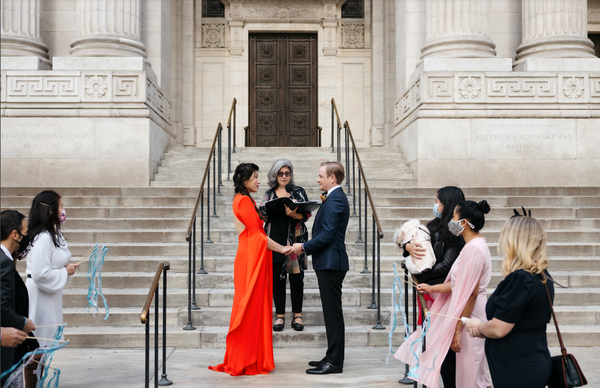 Yonkers, N.Y., where many New Yorkers raced after hearing that marriage licensing there wasn’t as backed up, 70 percent more licenses have been issued in 2020 compared to 2019, said Vincent Spano, the Yonkers City Clerk. They’re now limiting marriage licenses to emergency medical workers and those who offer a “really good reason,” as Mr. Spano said they can barely keep up with the Yonkers residents who want to get married.

The backups are being seen throughout the country.

In Little Rock, Ark., marriage licenses were up 28 percent in late March 2020 compared with the same time in 2019, said Terri Hollingsworth, the Pulaski Circuit County Clerk.

Let Us Help You Better Understand the Coronavirus