Home » Beauty and Fashion » Technology Could Turn You Into a Tiffany

Technology Could Turn You Into a Tiffany

From the Medicis to the House of Saud, it has always been possible for those with means to hire the most skilled artisans of the time to fashion gold and gems into spectacular pieces of jewelry. Within a few years, many people may be able to do it for themselves.

Let’s say a couple wants an 18-karat rose gold necklace to celebrate the birth of their daughter. Using digital tools on a brand’s website, they could create a design dotted with diamonds in the same pattern as the stars on the night she was born, see realistic images of the necklace before ordering it and have it produced and shipped within five days, if not sooner.

“Not just that, but the piece could be embedded with an NFT tag, which, when read by a smartphone, could trigger memories and digital memorabilia of the family, almost like a time capsule,” said Tanmay Shah, head of innovation at Imaginarium, a rapid prototyping and manufacturing center based in Mumbai, India, with a division specializing in jewelry.

Mr. Shah’s vision may sound far-fetched, but he is among a new breed of technophile jewelers convinced that the future of bejeweled adornment is hyper-personalized, computer-generated design made tangible by sophisticated 3-D metal printing.

In contrast, most high-end jewelers — especially those with traditional backgrounds — market themselves with stories about making things the (very) old-fashioned way, with tools and techniques, like lost wax casting, first used by the ancients.

Behind the scenes, however, many of them have spent the past two decades quietly exploring the design and manufacturing possibilities enabled by technology. The transformation began in the late 1990s with computer-aided design (C.A.D.), followed by 3-D printing, and recently has moved on to advances like artificial intelligence (A.I.), in which algorithms allow machines to serve as co-creators.

Now, hastened by the pandemic and the expansion of all things digital, some of the trade’s traditionalists are finally ready to acknowledge — and indulge — their inner techie. The Parisian high jeweler Boucheron is a notable example.

Since 2016, when its design team made 3-D scans of flower petals as the first step in creating floral rings that captured all of nature’s imperfections, the house has reflected the belief that embracing the future does not require disavowing the past.

“Many craftsmen thought integrating technology would erase their work,” Hélène Poulit-Duquesne, Boucheron’s chief executive, said in a video interview. “I’ve always fought to explain to them the hands of human beings are so important, they will always be at the center, but technology should be at the service of those hands.”

Ms. Poulit-Duquesne is one of the few executives in the high jewelry arena who is comfortable speaking openly about technology. She and Claire Choisne, Boucheron’s creative director, employed A.I. for the first time last summer to create the house’s Contemplation collection, which included a quivering cloudlike necklace of 7,000 titanium wires set with more than 4,000 diamonds and 2,000 glass beads.

“Claire wanted the woman to wear a cloud so we worked with mathematicians to create an algorithm,” Ms. Poulit-Duquesne said.

A kindred spirit lurks in Nick Koss, founder of Volund Jewelry, a private jeweler based in Vancouver, British Columbia. After several years of research and experimentation with A.I., he relied on an algorithm to help create his 2020 Night collection, a homage to the reliquaries and the candlelit roadside shrines that captured his imagination on a trip through southern Italy in the early 2000s.

Mr. Koss said he believed that computers had a singular ability to re-create patterns found in nature, and that humans played a critical role in how the machines generate those patterns. He offered an example of a collection inspired by leaves. 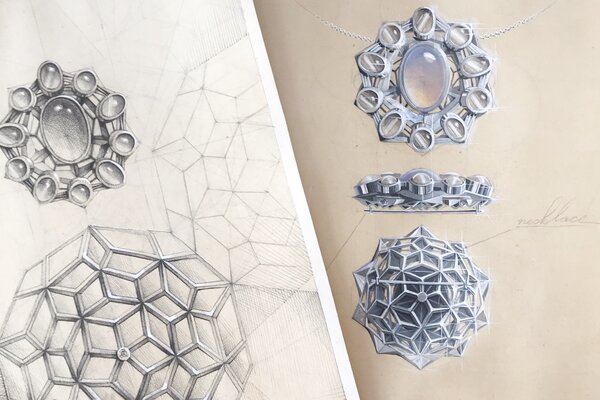 “Off the computer will go, creating infinite variations of leaves, eventually forming leaves that look like they’re out of an alien world,” Mr. Koss said. “It’s no longer just me drawing a leaf. It’s me setting the dominoes to create these variations.”

The process he described is known as generative design. The current consensus among industry specialists is that it has little application for jewelry, though it can be “fun to watch these software programs crank out their many possible solutions,” said Andrea Hill, chief executive and owner of Hill Management Group, a Chicago-based consultancy that works with jewelers to improve their digital marketing, operations and manufacturing strategies.

The other design process made possible by A.I. — and generally regarded as having greater promise for the jewelry industry — is called parametric design, which simplifies and therefore accelerates making patterns and exploring alternatives.

Both are complemented by 3-D digital printing, also known as additive manufacturing, which quickly gives jewelers the ability to see how versions of their designs look on a person. (An elaborate necklace, for example, can be printed in as little as 15 to 20 hours. Creating a handmade wax mold of the same design could take weeks.)

Mass-market jewelers have relied on additive manufacturing for years because it improves the accuracy of their designs and speeds the development period, so they can get to production quickly. But after printing creations in resin, plastic or wax, they often still turn to traditional casting methods to fabricate them. (The more advanced process of printing directly in metal, using precious metal powders and laser sinters to build 3-D designs layer by layer, is a promising but still nascent alternative.)

The high end, however, also sees opportunities. Tiffany & Company, for example, has used parametric design and additive manufacturing to create prototypes at its three-year-old Jewelry Design and Innovation Workshop (J.D.I.W.), a 17,000-square-foot facility around the corner from the company’s corporate headquarters in Manhattan’s Flatiron district.

“We have these brilliant designers and merchants who have ideas about where we need to go as a brand,” said Dana Naberezny, vice president of the workshop. “It’s important to figure out how we get something physical in their hands to understand the idea and be able to iterate quickly.”

Ms. Naberezny said the workshop employed about 60 people — a combination of master jewelers, model makers, C.A.D. designers, engineers and quality-management specialists — who, before the pandemic, sat at mobile desks that allowed them to cluster together as project needs arose. Now, team members rely on remote viewing equipment such as high-tech cameras, microscopes and video conference tools to simulate the feel of sitting next to one another, a spokeswoman said.

“The opening of the J.D.I.W. was about aggregating them,” Ms. Naberezny said. “When you put people together, it’s electric.” (Presumably Tiffany’s new owner, LVMH Moët Hennessy Louis Vuitton, which acquired the American jeweler in October, hopes that creativity — and the allure of the reimagined Fifth Avenue flagship — will power financial growth.)

Equally electrifying are the radical advances in material science that have transformed some jewelers into 21st-century alchemists.

Steven Adler, founder of A3DM Technologies in Sarasota, Fla., a pioneer in the research and development of additive manufacturing for precious metals, said the most exciting developments were coming out of Europe. Metallurgists at places like ETH Zurich, a Swiss research university, are mixing plastics with gold or adding ceramic to precious metal composites to make pieces that are lightweight and affordable — and likely will redefine our understanding of preciousness and luxury.

“What appears to the eye as enamel is ceramic — materials that are either printed or injection molded and polished,” Mr. Adler said. “Things we used to do with onyx and lapis, materials we could grind, we can now print. And yes, they are in luxury products because they afford us a different design we couldn’t have before.”

Still, many jewelers remain ambivalent about using technology for manufacturing, but they are enthusiastic about its value as a sales tool.

Bibi van der Velden, for example, is a Dutch jeweler trained in sculpture who makes the pieces of her nature-inspired collection entirely by hand. But the pandemic encouraged her to go all in on augmented reality (A.R.). Not only has she added A.R. filters to her Instagram feed that allow anyone to try on her jewelry virtually, she and her brand’s managing director, Pien Rijpstra, have also used the social media channel to host virtual client appointments from their studio in Amsterdam, complete with A.R. effects tailored to each collection.

During a recent virtual viewing of the designer’s Monkey collection, for example, an animated simian appeared onscreen next to a ring featuring a family of bejeweled chimps. “We call him Cheeky Chap,” Ms. Rijpstra said. “Our clients really love this — you should see the smiles on their faces.”

Ms. van der Velden worked with Atelar, a software developer based in Ukraine that creates A.R. filters using Facebook’s Spark AR Studio software. During the last nine months, Atelar also has worked with a number of Ms. van der Velden’s jewelry-making contemporaries, including Jacquie Aiche and Emily P. Wheeler, both in Los Angeles; Jessica McCormack in London; Delfina Delettrez in Rome; Lydia Courteille in Paris; and the Mercury Group, a Moscow retailer and distributor that wanted an A.R. filter so users could see themselves in the crown and earrings it presented to Miss Russia in 2018.

“Nowadays, it’s harder to sell than make something,” Max Moses, Atelar’s founder, said on a video call. “Coronavirus or not, brands want to increase their sales.”

Even if converting a user into a buyer proves difficult, the technology’s fun factor — and its ability to forge a stronger connection between buyer and seller — has persuaded plenty of jewelers to give A.R. a go. “We’ve had virtual try-on in the jewelry industry for years but have never seen any evidence it increases sales — it’s always gimmicky,” Ms. Hill said. “But for creating depth in the digital experience, it’s powerful.”

To hear the trade’s tech evangelists describe it, however, what’s coming next in the world of luxury jewelry will make today’s A.R.-fueled blend of reality and fantasy seem quaint.

“We’re only at the cusp of what’s unraveling,” said Lynne Murray, a jewelry designer who has had a front-row seat to the industry’s evolving attitude about technology since 2008. That year, as a graduate of the Royal College of Art in London, she co-founded Holition, a company that introduced virtual try-on technology — an early form of augmented reality — to brands such as De Beers, Tacori and Boucheron.

Today, Ms. Murray is the founding director of the Digital Anthropology Lab at the London College of Fashion, where she works on virtual retail environments, mentors companies on how to integrate A.I. in their workflow and ponders questions like, as she said during an interview, “How do we dress now that we exist primarily in a digital realm?”

Of all the cutting-edge topics Ms. Murray is investigating, the most unsettling to jewelry lovers may be the prospect of virtual jewelry and other goods that exist only online, such as the fashionable digital skins sold by the gaming industry or the digital diamonds that can be purchased as NFTs, or nonfungible tokens. She referred to the Fabricant, a digital fashion house in Amsterdam that creates one-of-a-kind virtual dresses, some costing thousands of dollars.

“We are inhabiting the digital environment in a much bigger way now, seeing ourselves in this virtual form and, of course, humans want to dress that form,” Ms. Murray said. “Jewelry is about how you communicate. And this is just another way to communicate.”