First Lady Melania Trump has been a controversial figure during her time at the White House. The First Lady has spent the last four years largely silent amid President Donald Trump’s hateful rhetoric and polarizing policies that most recently led to the pro-Trump insurrection at the U.S. Capitol. While the First Lady has not been vocal in her position, many critics have inferred messages through her sartorial choices.

The First Lady began stirring controversy with her style prior to Trump taking office. One of her most widely criticized fashion choices came during the second 2016 presidential debate between Trump and Democratic nominee Hillary Clinton. The now-First Lady chose a fuchsia Gucci pussy bow blouse for the debate, just days after the infamous “Access Hollywood” tape leaked that showed Trump making vulgar comments about sexually assaulting women.

Many on social media criticized Trump’s fashion choice — specifically because of the blouse’s name — in relation to her husband’s offensive statements (“when you’re a star, they let you do it. Grab them by the p–y. You can do anything.”), but the Trump campaign later stated the choice was not made intentionally in light of the leaked tape.

The Year of Ox Capsules Collections

Her most controversial look during her time as First Lady came in 2018 when she wore an Army-style Zara jacket that read “I really don’t care, do u?” while she traveled to McAllen, Texas to visit detained children who were separated from their families at the U.S.-Mexico border, per policies enacted by the Trump administration. 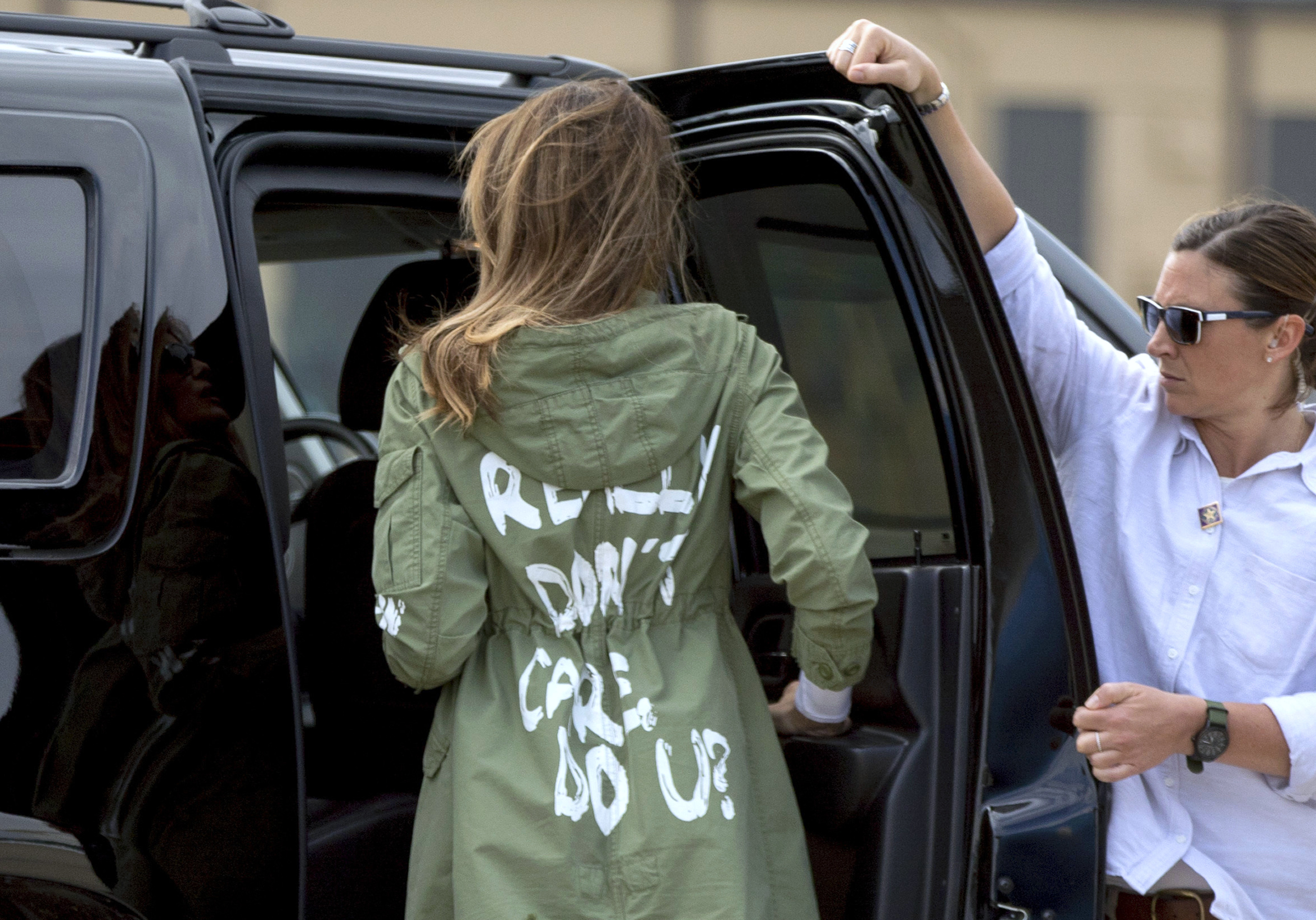 First Lady Melania Trump wears the controversial “I really don’t care, do u?” jacket before visiting detained children in McAllen, Texas in 2018. AP

The First Lady was met with immense criticism over the look for its tone-deaf nature amid the president’s harsh immigration policies. Her fashion stylist, Hervé Pierre, told WWD at the time he hadn’t ever seen the jacket, and, when asked about the outfit, her former communications director, Stephanie Grisham, stated “it’s just a jacket. There was no hidden message.”

Trump spoke out about the jacket months later in an interview with ABC during her trip to Africa, a visit that also sparked controversy for her choice to wear a pith helmet, which was criticized for its similarity to the styles worn by colonialists. During the interview, the First Lady said the jacket was intended as a message to the “people and the left-wing media who are criticizing me.” She said the jacket was not intended to be a message to the detained children.

These controversial fashion moments and many others have had a considerable influence on the fashion world’s perception of the First Lady’s style and will undoubtedly be a part of her legacy.

Click through the above gallery to see more photos of First Lady Melania Trump’s style over the last four years.

Related posts:
Nicole Richie Celebrates Daughter Harlow’s 13th Birthday With Rare, Unseen Pic Of Them Together
Jazmine Sullivan's 'Heaux Tales' is a Nuanced Take on Romantic Realism
Popular News
Ford ordered to recall three MILLION cars over airbag defect that's killed 27 including girl, 17, whose throat was slit
23/01/2021
Man Utd wonderkid Ramon Calliste, called ‘the next Giggs’, now owns luxury watch business and makes £5m a year – The Sun
26/03/2020
Megan Thee Stallion Addresses Criticism Over Twerking: ‘I Love to Shake My A**’
26/03/2020
Police guard shops to stop coronavirus panic-buyers and enforce social distancing – The Sun
26/03/2020
Coronavirus: Good Morning Britain’s Dr Hilary reveals ‘game-changing’ self-testing kit
26/03/2020
Recent Posts
This website uses cookies to improve your user experience and to provide you with advertisements that are relevant to your interests. By continuing to browse the site you are agreeing to our use of cookies.Ok