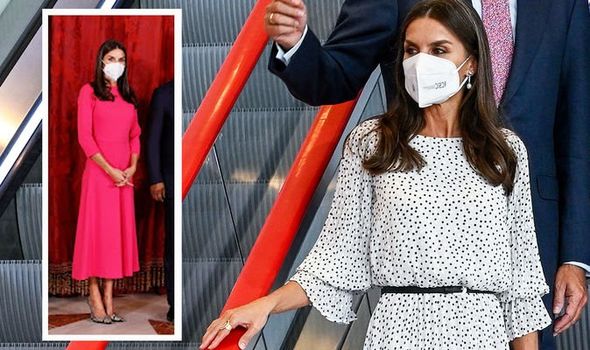 Queen Letizia, 49, is one of the most stylish royals. The Spanish royal and her husband, King Felipe VI of Spain were spotted attending the inauguration of the Botton-Champalimaud Pancreatic Cancer Centre yesterday. To add to this, the Queen’s official Instagram account posted a carousel of images from a lunch she had in honour of President of the Republic of Colombia today showcasing an alternative outfit.

For the inauguration, mother-of-two Letizia wore a chic spotted dress.

It was white with black spots and had a volumes pleated skirt which hit halfway down her calfs.

As with the majority of Queen Letizia’s outfits, the dress was cinched in at the waist with an Armani black belt.

She wore her hair down and had pearl drop earrings as the only jewellery.

On her feet were simple black court heels.

When she attended the lunch in honour of Iván Duque, Queen Letitiza opted for a red dress.

Made from soft red fabric, it had three quarter sleeves which were ballooned at the top and had gold buttons on the lower section.

Again it was cinched in at the waist and the top hung ever so slightly baggy.

The skirt then fell to just above the ankles.

She teamed the dress with red court heels.

Also today, Casa de S.M. el Rey, the official Twitter account which posts information and images about the activity of the Spanish Royal Family and the House of S.M. the King, posted some images of another meet.

Queen Letizia and King Felipe met with the President of the Republic of Angola João Manuel Gonçalves Lourenço for a lunch.

The Queen was wearing a very similar outfit to the red dress.

This time, her dress was crimson pink and again, was three quarter sleeved.

It had another A-line skirt and fell mid-calf.

“A woman that can capture an entire country with a single appearance,” Melita said. “Whether formal or informal, high street or designer, it is clear that Queen Letizia oozes style.

“Her outfits clearly reflect her personality, her surroundings and occasion.