A MUM has revealed how she stuffed her child’s Elf on the Shelf inside a condom when she couldn't find a balloon.

The anonymous woman shared a snap of her invention on Facebook, after she was forced to improvise. 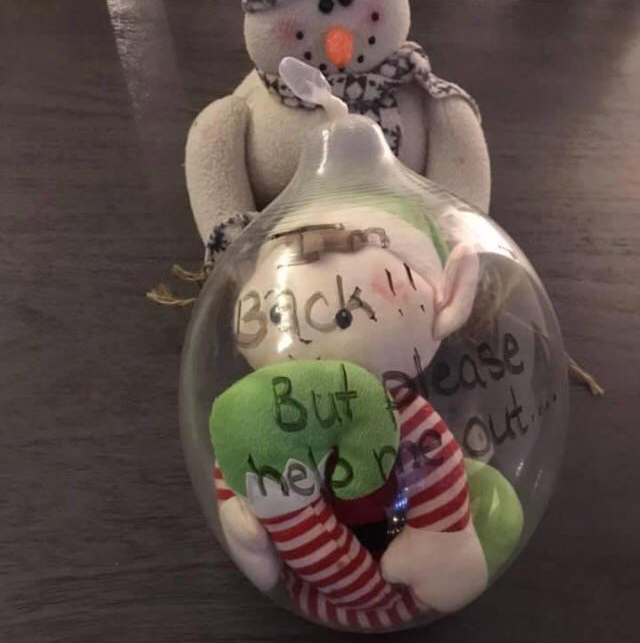 The elf has been stuffed inside the condom to "quarantine" when returning from the North Pole.

The condom has then been blown up, and the mum has written “I’m back but please help me out” on the exterior.

Captioning her snap, the mum wrote: “Our elf is coming back tonight to live with us throughout the month of December.

“Sorry I didn’t have any balloons so I improvised.”

Her post has since been shared on Reddit where it divided opinion, with several dubbing the invention “gross.”

One wrote: “I probably would not have realized it was a condom if the poster didn't point it out. Aren't most condoms lubed? Ewww”

“Good God” added another, while a third dubbed it, “trashy.”

However, there were a few who jumped in to defend the mum, pointing out that her child would be none-the-wiser.

One wrote: “It’s not likely the kid will know what the condom is or what it’s for.

“It’s just a parent being resourceful with the bonus of being an embarrassing story they can tell the kids when they grow up.”

Another agreed adding: “That’s the best use of a condom I’ve ever seen.”

In other Elf on the Shelf news, this mum also used a condom for her daughter's toy after realising how expensive balloons were.

And Christmas-mad mums like Sue Radford have been sharing their elaborate Elf on the Shelf ideas.

Plus celebs like Holly Willoughby and David Beckham have been sharing snaps of their own elves.