A MUM was left fuming after returning to her car to find a passive-aggressive note left on her windscreen by a stranger.

The Australian woman had parked in the supermarket car park while she shopped, but a disgruntled shopper insisted she had no right to use the parents only spot.

The woman shared the note on her TikTok page, Inferno Insomnia, where other parents were just as shocked.

“Please do not park in parents parking if you do not have kids!” the angry rant began.

“Your registration and vehicle has been reported and given to centre management!

“In future keep these parking areas available to those who need them for everyone’s safety! Not for your convenience!!!” 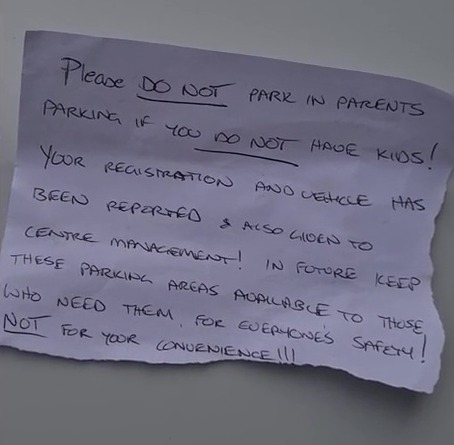 Some of the words were even capped up and underlined to emphasise the anonymous person's frustration.

Naturally, the mum was perplexed as a car seat in the back of her car, and the kids' clothing items sprawled across the back seat, were clear indications that she was a parent.

Pointing this out, she said in the clip: “If you look in the window of my car you can clearly see a child’s seat and children’s beanies.

“So do I need to put one of those stick figure family stickers on my car to prove I have children?”

People were quick to defend the mum by labelling the note-writer a “drongo” and “entitled”.

One woman jokingly suggested: “Just leave the kid in the car next time so they know,."

While another pointed out: “Some people whinge at anything.”

“The effort they took to write that out in capital letters, oh my lord,” one incredulously commented.

“I bet they were annoyed because there was no parking for them,” someone else surmised.

Some pointed out that even if the woman didn’t have kids – it’s in fact not illegal to park in the 'parents with prams' parking.

“They were obviously on a high horse because those parking spots are a courtesy and it’s not illegal to park in them without kids,” one firmly stated.

“It’s a courtesy park, anyone can use them,” another agreed.

Meanwhile, this mum started potty training her twins at three weeks old. She'd hold them over the sink and hope for the best.

Plus, this mum shares easy hack which gets babies to stop crying immediately.

And an expert reveals the innocent household buys that could hurt kids & the surprising parts of your home you MUST childproof.