Home » Beauty and Fashion » ‘Mr. Downstairs’ Had the Key to Her Heart

‘Mr. Downstairs’ Had the Key to Her Heart

Elma Holder couldn’t help feeling ridiculous on days when “Jerry Downstairs,” as she called him, would leave the retirement community building they lived in to visit his lady friend in town.

“He would disappear for a day or two, and I would think, ‘Oh, this is silly that I’m feeling these feelings of jealousy,’” Ms. Holder said. When she moved into the Residence at Yukon Hills in Yukon, Okla., in January 2018, Mr. Downstairs had at first seemed a minor pest.

Ms. Holder, 79, was transporting her belongings in on a wobbly cart when he presented himself unbidden. “Things were falling everywhere, and all of a sudden there he was, asking if he could help,” she said. “I told him, ‘No, I can do it myself.’”

Mr. Downstairs, whose real name is Jerry Stallings, did not insist. But he didn’t slink off, either. Instead he followed her to the elevator, where he helped steady the cart and showed her that his own apartment was directly under hers, one flight below. Within days she was running into him regularly in the community room and telling friends about the gentlemanly widower who lived downstairs. “I became enamored with him,” she said, a feeling that surprised her.

In 1975, Ms. Holder founded the National Citizens’ Coalition for Nursing Home Reform, now the National Consumer Voice for Quality Long-Term Care, in Washington. She ran it for 20 years; her advocacy work was her life’s passion. Though she married in 1960, the marriage was over in 1968. From then, she made do with a handful of “special friends,” she said. “I just lost interest. I certainly had no interest in ever getting married again.”

Before their romance could bloom, though, Ms. Holder considered the competition. “I started noticing that he was the most attractive man in the place, and that other women were noticing him, too,” she said. The lady friend she had heard about outside the retirement community turned out to be that — just a friend. But her jealousy didn’t let up entirely until that summer, when she planned to take a four-week trip to Washington to visit friends. 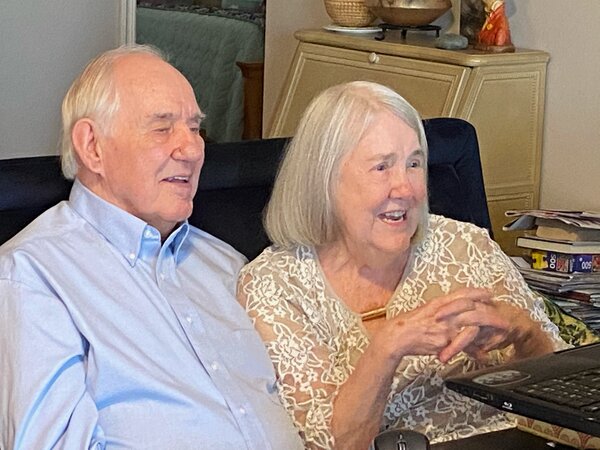 “He walked me out to the car, and it was very hard for us to say goodbye,” she said. By the time she came back, she had fallen in love and had an inkling he felt the same. “But I still didn’t have a clue what his last name was.”

In the fall of 2018, Ms. Holder’s activist tendencies were ignited when a friend who had violated a retirement community rule where they lived was evicted. “It was a silly little thing, but I decided I was going to fight to keep her in,” she said. “Jerry joined me. We were in tune that way. We got a petition going.” By the time he signed it, she finally knew his last name. (In September she had sneaked a peek at a batch of mail on his dining room table.) And though the friend soon gave up her bid to stay and found another place to live, the couple’s devotion to each other grew.

In early October, they went to Yukon’s annual Czech Festival, a celebration of the local heritage. At the top of the Ferris wheel, Mr. Stallings asked Ms. Holder to marry him.

“It just came over me like I had been hit by lightning,” said Mr. Stallings, a native of Tulia, Texas, who spent the bulk of his professional life in agricultural sales. Ms. Holder, elated, said yes.

In February 2019, they moved out of the retirement community into a new home in Yukon. On Nov. 14, they had a small ceremony at home with only her brother and sister, O Williams and Peggy Long, and Mr. Stallings’s daughter, Cheryl Stallings Price as guests. Their friend Kathryn Schulke, who was ordained by the American Marriage Ministries, officiated.

Or so they thought.

A few days later, the Canadian County clerk rejected their license because they couple weren’t in the same room with their officiant, a legal requirement in Oklahoma. So, on Nov. 19, they gave it another try and were married in adjacent Kingfisher County, about 50 miles away, by Nikolas Dean Smith, an ordained minister who works in the county engineer’s office there.

“The marriage received the official gold seal on the spot,” said Ms. Holder, who, after being on her own for so long, decided to change her name.

“We know we’re going to be spending the rest of our lives together,” she said. “I want to spend it as Mrs. Stallings.”