MILAN — If 15 months away from live fashion has taught us anything, it is that viewing fashions digitally is as satisfying as pretending to dine by looking through the window of a restaurant. “You have to see it, smell it, feel it,” Nick Sullivan, the creative director of Esquire, said on Saturday afternoon in griddle-pan hot Milan.

Pausing for a cigarette beside some tram tracks following a Dolce & Gabbana show, Mr. Sullivan reflected on his decision to rejoin the caravan traveling to the shows that designers are beginning, with considerable caution, to stage here and in Paris, as those cities slowly emerge from the pandemic’s darkest days.

“Digital can be fantastic,” Mr. Sullivan said. Yet, as with a good meal consumed with just one’s eyes, it invariably makes you hungrier. Milan relies on its position as Italy’s fashion capital for its economic health and cultural vitality.

“For me, resuming live shows instead of digital events is particularly relevant because it gives a sense of purpose and a sense of reality to what I do,” Giorgio Armani said in an email. “It is also important for the city.”

“Milan is a city that lives on gatherings, whether it is Fashion Week or the Salone del Mobile,” he added, referring to a giant furniture trade fair that pumps millions into the local economy.

Not just titular “king” of Italian fashion, Mr. Armani proved himself a prophetic industry leader when, in February 2020, he made a controversial decision to cancel his live women’s show and instead stage one behind closed doors without an audience.

“I had this intuition that staging a show in that moment may not be a good idea,” Mr. Armani said. “It’s hard to put into words because, in the end, what I did was to follow my instinct, the same instinct that has guided me all my life.”

Those instincts moved the designer to be first among his colleagues to announce a return to live shows, an important gesture of optimism in one of Italy’s hardest hit regions — and in a city where unemployment rates have hit new highs, hotels are half empty and vacant storefronts throughout the Golden Quadrangle, Milan’s epicenter of luxury consumption, are boarded up.

Not everyone agreed with his decision to forgo a show. “Some even criticized me, saying that I was exaggerating,” Mr. Armani said. “But time has proved me right, and now, for the same reason, I believe it is important to go back to live shows to give a sign of hope and restart our system.”

In many ways the resumption of shows here — Etro, Armani and Dolce & Gabbana were the bellwethers — and in Paris is a foray into how the future of global fashion is likely to look. While digital and its panoply of tools are clearly here to stay, there will almost certainly be a return to live shows and to the fashion weeks that, especially during the pandemic’s early days, came in for criticism as emblems of glut and also potential superspreader events.

“Live shows are a must,” Alessandro Sartori, the artistic director of Ermenegildo Zegna, said during a preview of his spring 2022 men’s wear show at Zegna headquarters. “We’ve learned a lot since then about digital as a tool.” Early on, Mr. Sartori pivoted to shows shot as films, discovering along the way hidden talents as a filmmaker and scenarist.

“We found that digital helped to broaden and deepen the experience for fashion audiences,” he said. “But maybe we don’t need shows with 1,000 people that nobody knows why most of them are there. Maybe we have shows with 300 people, but they are the right 300.” 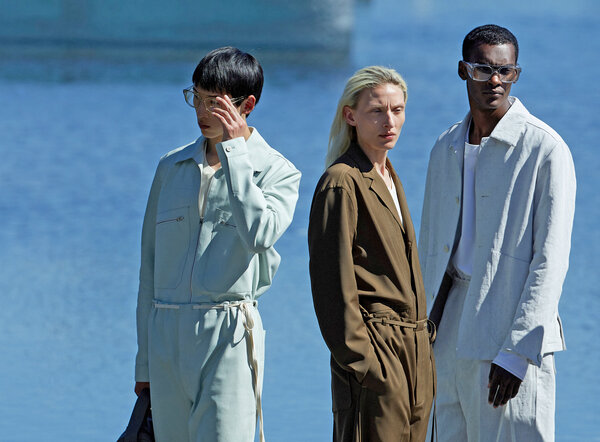 There’s no telling who that might be, but anyone lucky enough to be in on the action will find that designers were not wasting the downtime cleaning out the sock drawer. Mr. Sartori’s 15-month hiatus yielded some of the more creative designs of his career. For a long time Zegna was like the Ever Given, a behemoth immovably wedged awaiting the changing of the tides. Lockdown proved to be the tide.

Filmed in a maze outside Turin, the Ermenegildo Zegna collection extended experiments the designer began a season ago into sartorial forms that, while hardly new, he deploys in ways that aim to reset our thinking about traditional boundaries between work and play, indoors and out, and that tweak the tropes of clothes as markers of class.

Boiler suits are obviously not for the boardroom. Or they weren’t until Mr. Sartori gave this most workmanlike of garments a makeover, turning it into modular tailored elements that read as connected, and that are rendered — like sartorial trompe l’oeil — in paper-thin treated calf leather, upcycled vegetal fibers, hemp or abstractly patterned wool jacquard and in colors barely registering as such. That is, except the pinks that ASAP Rocky, among others, seems to love.

Some of the trickier elements, like adjustable internal belt closures on kimono-style jackets (and with single-seam kimono sleeves), seemed unfortunate, as did the sling-back sneakers and protective rubber hems on sidewalk-dragging trousers that were wider than Oxford bags. Speaking personally, the point of lockdown pounds so many of us added is not to succumb to expandable garments but to lose them. “Clothes can be domineering,” one front row wag said. Is that so wrong?

Offices — getting up and going to one — came to seem like a fairly abstract proposition during the past year-and-change, at least among those of us fortunate enough to be gainfully employed. At Prada it has sometimes seemed that dressing for work is not high on the list of design considerations. This was true again of the spring 2022 collection. To wit: a collection built almost entirely around what looked like short-shorts or onesies.

Both Miuccia Prada and her collaborator Raf Simons wrote somewhat vaporously in their preshow notes about utopianism, personal freedom and the childlike joy of “going to the beach.” Without wanting to rain on anybody’s holiday fantasy, reality does tend to intrude. Eager as we all are to feel liberated and carefree, it seems premature to pull out the shovels and sand pails.

As always, there is often much to admire about the way Ms. Prada, especially, shifts the proportions of clothing to conceal and reveal differing elements of the human form. This is especially true when she takes on men’s wear. Next to Rick Owens, no designer essays more consistently and trenchantly on the tenuousness of masculinity as a concept. (Remember Mr. Owens’s collection with peekaboo cutouts exposing the guys’ genitals?)

Here, the models’ scrawny gams poking out of short pants under boxy jackets felt like a meta-commentary on the shaky construction of gender binaries. For men and women alike, trouser legs are empowering and protective. Take them away and suddenly the wearer seems freer, yes, but also more vulnerable.

It seems certain the TikTok boys will take to this Prada collection eagerly, just as label fiends will snap up the bucket hats with dipped brims (and zippered storage pockets) and the nautical motif prints (mermaids, octopus, anchors) resembling vintage tattoo flash. Those who turn to Prada for the durable basics that are, in fact, the brand’s bedrock will have to wait for next season, when offices reopen and designers, along with the rest of us, will confront workplace reality again.

For Walter Chiapponi, the designer of Tod’s, realignment of that reality made for a bracing starting point. “I’m pretty punk,” Mr. Chiapponi said during a collection preview held at Tod’s headquarters in an elegant palazzo on the Corso Venezia.

Tod’s would hardly seem a likely place for a punk sensibility. Yet, with Mr. Chiapponi the latest in a succession of talented men’s wear designers (most notable of them Andrea Incontri), the label may have found a sweet spot. Tearing up and then recombining clean-cut elements of a sportsman’s wardrobe — zippered canvas jackets, others rendered in abbreviated safari style or as windbreakers in suede or parachute nylon — he made a strong case for bringing the outdoors in. (Though no zip-apart khaki shorts, please.)

Mr. Chiapponi claimed as his inspiration the playboy adventurer Peter Beard and, indeed, pointed to an obligatory mood board pinned with images of the industrious photographer and diarist who, while far from as being as hereditarily rich as both his obituaries and legend had it, never toiled at a desk job a day in his life. “I love the beauty of that kind of freedom,” Mr. Chiapponi said. Don’t we all?

Duty, rather than freedom, was on Giorgio Armani’s mind this season, as he led an industry he helped create out of the pandemic. “Let’s not forget that ready-to-wear was invented in Milan in the 1970s, another moment of crisis that Italians overcame with bolts of fantasy, invention and hard work,” he said.

Fantasy was in short supply in Milan this week, unless you counted the acid trip patterns and Emerald City palette of Kean Etro’s delightful show staged live on a dusty, disused rail track in the center city. Mr. Armani’s show was also presented in person, in the 18th-century palazzo where some of his storied early shows were held and where he still lives, effectively, over the shop.

As if to remind everyone of how fresh the Armani look once was — in those bygone “American Gigolo” days when all the slouchy, sexy elements of Milanese style (as adapted from Neapolitan tailoring) was new to the wider world — he reprised it for a group of 80 invited guests. At 86, and newly mended after breaking his arm in a recent tumble, Mr. Armani seemed feisty and vigorous as ever. His clothes, too, looked more fresh than they have in years.

The balance he struck between finely proportioned trousers, with their slightly dropped crotches, offset by light, tidy silk bombers or unlined jackets spoke of a reinvigorated Armani. A child of wartime Italy annealed by harsh experience — he starved and was temporarily blinded in boyhood by unexploded ordnance — Mr. Armani possesses plenty of backbone.

Asked at a post-show meet and greet why he felt that returning to live shows was so important, he flashed a confident grin. “Because I adore it!”