Bruce Springsteen is not the only beloved cultural figure who has declared New York City open again for business.

Two days after the Boss reopened on Broadway, Marc Jacobs returned to Fifth Avenue with the city’s first full-fledged fashion show in front of an air-kissing, non-socially distanced audience since the pandemic began — and his first show since February 2020. It was held in the echoing marble entranceway of the Public Library just atop Bryant Park, erstwhile home of New York Fashion Week, the stairs outside speckled once more with street-style photographers.

Unlike other designers, Mr. Jacobs has eschewed the digital sphere as a way to show his work during the last two seasons and 16 months of relative isolation; he hasn’t played around with ersatz music videos or lonely livestreams, but rather bided his time with his personal Instagram, reconsidered his business, regrouped. 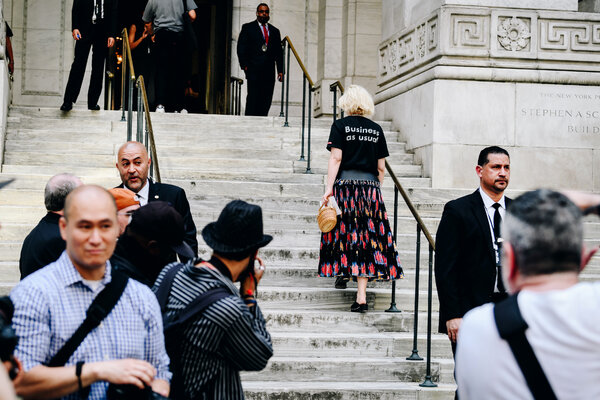 This time around there wasn’t any special set. No flashing lights or pyrotechnics. No guest stars, as at his last live show, when the dancer Karole Armitage and her troupe punctuated the event and Miley Cyrus did double duty as a model. Just clothes, animated by real people, moving through the world for about nine minutes and 32 seconds.

As if to say: Hey, this is enough.

And you know what? It was.

Which is not to say they were just any old clothes. They were transition clothes: not between seasons (nominally, this was fall/winter), but between states of mind, and being. Between the cocoons and retreats of the last 16 months — all those comfort clothes for self-soothing we kept nattering on about — and the growing liberation of the present. Metaphor clothes! A story of re-emergence, told in crazy, couture-scaled skiwear.

Also futuristic 1960s space age references (and fake eyelashes), logo-a-gogo, sci-fi gothic, Op Art, puffers and cashmere, with nods to the work of designers from Courrèges and Paco Rabanne to Halston and Rick Owens. After all, how do we begin to think about where we are going if we don’t acknowledge where we have been?

Coats were giant, curving constructions that swallowed, or swaddled, the body, sometimes covered in graphic Marc Jacobs print that itself sometimes came covered in tiers of beaded fringe. And always with matching iridescent leather flares and sweaters with built-in hoods to protect the head.

Plackets of reflective circles woven into faux chain-mail tunics and skirts were layered atop utilitarian ribbed onesies and floor-length knits; oversize puffers in black and white stripes swept the floor like royal robes (or portable tents, depending on your level of paranoia); and evening gowns were Fortuny-pleated in raspberry and sunshine yellow and the green of leaves after the rain.

There were puffer metallic snoods and elbow-length leather opera gloves; enveloping stoles in duchess satin and faux fur, and big blocky platforms. There were both guys and girls on the runway, whatever. It was all very covered up (sleeves and hemlines long, necks high) — until it wasn’t. And at the end, the outer layers, which had dwarfed the little figures within, were shed to reveal turtleneck tops that were actually peekaboo bodysuits left backless or cut hip-high on the sides, or bias-cut dresses in circular stripes, orbiting the body just so.

Though Mr. Jacobs has in recent years held the pole position of closing the New York shows, this was more like the start of something: a preview of what is to come in September, when fashion week returns along with the exclamation point of a fall Met Gala, with all the glitz and glamour and opportunities to reimagine who we want to be next that that implies. Especially because the Jacobs calling card as a designer had always been an uncanny ability to hold his finger up to the wind to sense which way it is blowing, the better to give that momentum form.

All of which makes the title of this particular show particularly, hopefully, apropos. What was it?