One of the lesser-known facts about Robert Mapplethorpe is that, before gaining fame as a photographer, he experimented with jewelry.

About a decade ago the jewelry designer Gaia Repossi learned about that connection after she bought a Mapplethorpe photograph of a palm tree, titled “Puerto Rico, 1981,” at a small show curated by the director Sofia Coppola at the Thaddaeus Ropac gallery in Paris.

Ms. Repossi said she fell in love with the print at first sight. “It was the very first artwork I was ever interested in purchasing,” she said. “I’m very fond of art, and I study it, but I never really considered myself a collector.” 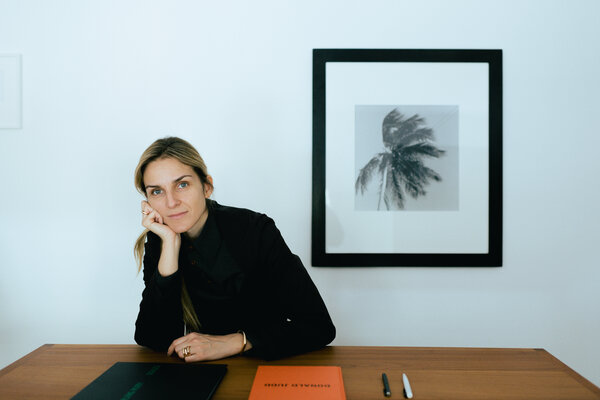 She hung the print in her studio, and in 2017 asked the Robert Mapplethorpe Foundation in New York for permission to reproduce it on the invitation for the introduction of a Serti Sur Vide collection at Repossi, where she is the fourth-generation creative director. Founded in 1920 by her great-grandfather, Gian Pietro Repossi, the brand is now owned by LVMH Moët Hennessy Louis Vuitton, which has 81 percent of the business.

The request was the beginning of a long exchange, now culminating in Repossi/Robert Mapplethorpe, an eight-piece capsule collection of fine jewelry and handmade one-of-a-kind creations inspired by the artist’s work. Designed by Ms. Repossi in collaboration with the foundation, via the licensing agent Artestar, the pieces represent the brand’s first artistic partnership in jewelry. They also are the foundation’s first foray into fine jewelry, with prices ranging from $2,000 to $258,000.

Repossi plans to unveil the collection at Dover Street Market in New York on May 6, then take them to the retailer’s outposts in Los Angeles and London before ending up at the brand’s Place Vendôme boutique in Paris in September. A second capsule is planned for next year.

Ms. Repossi said she set out to revive what she called “the young Robert” that she discovered in the foundation’s archives: a multidisciplinary artist living — and sometimes struggling — during the cusp of the punk movement in New York in the late 1960s and early ’70s.

“Robert was interested in jewelry, even when he was very young,” said Michael Ward Stout, the artist’s lawyer and president of the foundation. He met Mapplethorpe in the early 1970s at Max’s Kansas City, a famed nightclub in New York.

“He made those pieces before I knew him well, but even when he matured as an artist, he was a great collector of objects and things,” Mr. Stout said. “He would spend every Saturday going to antique shops and looking for fine-art glass, or rings, even if he wasn’t going to wear them, and he would display them around his apartment in a very organized way.”

The formality of the artist’s Catholic upbringing influenced his approach, Mr. Stout said. “He was visually driven, and he also had a very provocative sense of humor and a great heart.”

Ms. Repossi said Mapplethorpe’s early drawings, collages and mixed media creations showed “he was already flirting with the camera, but his jewelry was like sculptures,” adding that the artist’s almost primitive aesthetic would have made him an extremely successful jewelry designer.

“You can see all the little seeds of his photographic work right there in his jewelry,” she said. “It’s very symbolic. I’m not specifically as good at that, so it was like a good school for me.”

Ms. Repossi works exclusively with precious metals and stones while Mapplethorpe’s necklaces and plastrons were made of beads and what she described as “cheap, strange objects.”

Drawing on her background in anthropology — Ms. Repossi holds a master’s degree in the subject from the Sorbonne — the designer spent three years gathering more than 150 examples of Mr. Mapplethorpe’s jewelry and visiting the more than 2,000-item collection of his work at the Getty Research Institute in Los Angeles.

Ms. Repossi’s designs for the capsule were all organic shapes in brushed gold, a sharp contrast to the usual polished, angular aesthetic of Repossi jewelry.

The clearest bridge between the two artists’ worlds is the Jetty ring, inspired by a simple silver band that the musician and author Patti Smith, a Mapplethorpe muse, wore in some of his portraits. Transposed into the stacked style of Repossi’s 10-year-old Berbere line, the ring comes in a light rose gold with a brushed finish, which Ms. Repossi said she chose for its androgynous appeal.

The Relic Claw necklace ($22,050) is what Ms. Repossi called an “extreme tribute,” a punk-inspired transposition of a Mapplethorpe piece into fine jewelry, with five gold alloys and one bead worked in black gold set with white pavé diamonds. A master jewelry sculptor in Paris handcrafted its centerpiece: a dark gray crab claw in palladium-plated white gold.

“It represents the best of my profession, with the finest materials in a piece that’s very cool to wear,” Ms. Repossi said. “It looks very retro, as if it has been used. I don’t want to say it’s spooky, but the original probably had a mystical, talismanic dimension.”

The six-strand Chain necklace is the most expensive piece in the collection, at $258,000. Inspired by bits and pieces from the archives, it was entirely handmade, and some links were set with gradient gray pavé diamonds.

The most technically complex piece, however, is the fully articulated Mechanic ring extrapolated from a single motif that Ms. Repossi found among the beads and other odds and ends that Mapplethorpe stored in tackle boxes and sometimes wore. “It’s like an Art Deco robot,” she said of the design ($52,500). “It’s more sophisticated than the original, more refined.”

The Americana Flag ring echoes a major theme in his work. “Mapplethorpe saw America as very open, diverse, strong and open to the future,” she said. “I feel it’s a very contemporary theme that we expressed very well. Hopefully now is a good time to wear a flag.”

And a Mapplethorpe collage inspired the Triptych Heart necklace, a triple-heart design set with black pavé diamonds and held together by tiny hoop links. A comparatively simple piece, it retails for $11,050.

Mr. Stout said that, when working with the Mapplethorpe archives, the foundation was cautious: “You want to be loyal to the art.”

“I’m sure that Mapplethorpe would have loved Gaia personally, she’s very sensitive to his artistic vision,” he said. “And he would have liked the high-end, Place Vendôme nature of the project. He was a great snob toward the end. He would have stayed at the Ritz and gone to the opening.”