Kylie Jenner is flaunting her famous curves yet again in a tiny ab-baring top. She wrote about ‘missing you,’ which has fans wondering if she’s talking about ex Travis Scott.

Kylie Jenner is setting the pulses of fans racing once again with a sexy home photo shoot. The 23-year-old dropped three snapshots to her Instagram on Nov. 11 that came on the heels of promoting her new Kylie Skin rose bath collection. She was seen wearing nothing but lingerie on top, which flaunted her amazing curves and toned abs. She was actually helping out one of the Kar-Jenner family businesses, as the item was the SKIMS Pointelle Logo Triangle Bralette in Quartz from sister Kim Kardashian‘s solutionwear line.

miss u missin me

Kylie’s room was lit in a bright pink color, which reflected off of her bare skin in the three selfies she shared. She wore her sandy locks in waves down to her waist, and had a perfect layer of flawless makeup on for her home photo shoot. The mother of one went casual on the bottom, wearing a pair of dark drawstring sweats in her snapshots.

As if her bosom-baring photo sesh wasn’t enough to capture the attention of her over 200 million Instagram followers, her caption had them guessing that Kylie might be thinking about her ex, Travis Scott. She wrote, “miss u missin me” to go along with the sultry snaps, which had some pondering that she was sending a cryptic message to the 29-year-old rapper. 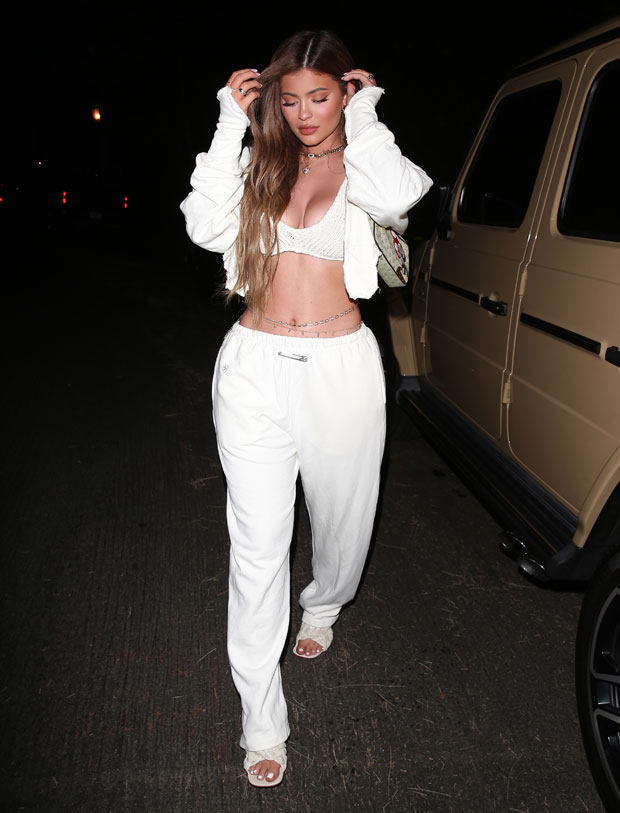 Kylie’s nearest and dearest were impressed with the photos. Sister Khloe Kardashian, 36, wrote, “Ohhhhh wowwwww” in the comments, while Ky’s BFF Stassie Karanikolaou left “okkkkkk” with a series of sly smiling emoji faces. Many fans simply commented with fire emojis or told Kylie how gorgeous she is.

As if the three photos weren’t enough, Kylie put some movement to her sexy outfit with a series of Instagram story videos. She wore the same lingerie top, but this time was bathed in red light inside her bedroom. She seemed to be inspired by the Bryson Tiller song “I’m Ready For You,” as Ky mouthed along with the words as it played in the background. She then ran her fingers through her hair and laid down on her bed, which combined with the song was explosively hot. Within two hours of Kylie sharing the three bralette IG photos, the post already had surpassed five million likes!