Kristen Stewart Performs Audience of One at Chanel

The French brand held its Métiers d’Art show in a chateau in the Loire. It was no laughing matter. 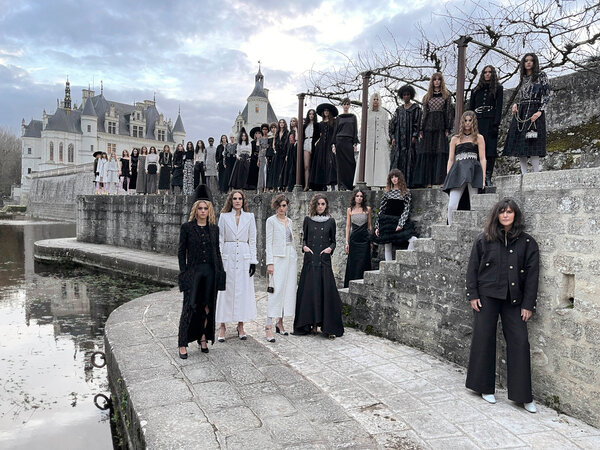 The 1980s were the renaissance years of Chanel: the decade Karl Lagerfeld took the helm of the house and began knocking the camellias and pearls and bouclé off their pedestals, dosing the classic with the healthy sense of amused disregard that became a new signature for the brand.

Their signifiers — the shoulder pads, red ties, gold chains and buttons — have been weirdly present again, in fashion, pop culture and politics alike, ever since that avatar from the decade, Donald J. Trump, started taking up all the air in the room.

So it is little wonder, really, that when Virginie Viard, Chanel’s current creative director, decided to have her Métiers d’Art show in the Château de Chenonceau, the Loire Valley castle that was once home to Catherine de Medici, the renaissance patron, both periods got spliced together in her mind. Not to mention the always present history of Gabrielle Chanel herself.

That’s how it goes in fashion: The designer imagination leaps from one connection to another, pulling pennies out of the air, and then adds them up into an unexpectedly alluring new whole. That’s how it works.

Or sometimes, as this time, doesn’t quite work.

In the vaulted black-and-white checked hallway of the chateau, in front of a coronavirus-dictated guest of one (the actress and Chanel ambassador Kristen Stewart), Ms. Viard offered black-and-white checked miniskirts under bouclé blazers and over footless Jane Fonda aerobic tights. Sweeping velvet greatcoats atop white bouclé playsuits trimmed in gold chain. A silvery unitard beneath a shell pink miniskirt suit embroidered in elaborate gold leaf (also beneath a bouclé shorts suit).

There was a high-low strapless black gown cinched with a trompe l’oeil belt with a portrait of the castle itself picked out in rhinestones, and a lovely ruffled white blouse paired with a full black skirt, that same belt — and a triangular black toque, sprouting tulle. There were embroidered page boy tunics and fringe-trimmed rocker vests and country intarsia floral denim dresses and slithery black second-skin trousers with harlequin diamonds cut out at the calves.

There were some great pieces amid the costumes, most notably a glinting gray tweed coatdress, and the workmanship was, as always with Métiers d’Art, eye-popping. The collection was originally conceived, after all, as a celebration of the skills of the specialty artisans and manufacturers that support the couture industry, and that Chanel began acquiring in 1985. Next year, 11 of them will move into a new, Chanel-created centralized site in Paris.

And holding the show in a historic building built to honor women, shaped by strong women (the site is also known as the Château des Dames), was smart at a time when women are demanding their due. The collection came accompanied by a limited-edition book of photographs from Juergen Teller immortalizing the castle. (As shows have become digital, companion books have become a thing. Proenza Schouler created one for its ready-to-wear collection, a way to keep the experience special, and concrete.)

But the Métiers d’Art experience has also traditionally been accompanied — sometimes almost overshadowed — by lavish sets and extravaganzas rife with celebrities, bejeweled customers and Champagne.

Given the pandemic, that was not possible this season, and as a result, the clothes alone had to carry the moment. Ms. Stewart, herself draped in pearls à la Coco, performed rapt attention with aplomb, but she couldn’t hide the fact that amid all the attention to detail and past-meets-present power posturing, one crucial element was missing: irony.

Ms. Viard has talent, and a vision of sorts for where all of this is going, but seemingly no sense of the absurdity of our own kitschy bombast and dreams. No leavening raised eyebrow at all of the references.

The result, like the rhinestone belt and the checkerboard skirts that mimicked the floor, is just too literal. And this is a time when, in fact, the one thing we could really use is a light-handed perspective on both past and present, and a bit of a laugh.