The TV host had taken a few days off from the hit ABC show Live with Kelly and Ryan but returned to sit alongside her co-host Ryan Seacreast and help interview Love, Victor’s Michael Cimino.

The mom-of-three rocked the satin shirt tucked into a cream pencil skirt, and paired the look with white heels. She wore her blonde hair in loose waves, her usual style.

Her return comes after she revealed she will be the host of the upcoming show Generation Gap on ABC, and it’s been newly revealed that her frequent co-host, Ryan, will be joining her as well.

While it’s unclear whether Ryan will be there for only a one episode stint as a guest or play more of a recurring part, his presence acts as a welcome support for his friend and co-star.

In a clip the TV host shared, he was seen in one episode hiding behind a wall, with him reading out a clue to one of the contestants. 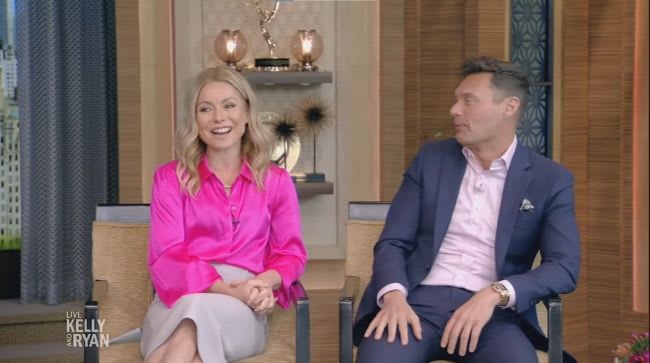 “I co-host the show with a small, blonde person,” he read, presumably describing Kelly, to which the answer presented from one of the junior players is: “Rapunzel?” leaving both hosts in hysterics.

“The battle of the ages starts July 7! Catch me in #GenerationGap on ABC, hosted by the lovely @kellyripa. See you there & stream on Hulu!” Ryan captioned his announcement.

Kelly revealed earlier this month that she would be hosting the brand new game show, which has been a longtime coming, as it was first planned and ordered three years ago, though only got a slot on the ABC line-up recently.

Sparking an epic “battle of the ages,” the show is in fact a revival from a similar competition popular in the late 1960’s. It’s produced by the host’s production company with her husband, Mark Consuelos, known as Milojo, alongside none other than Jimmy Kimmel’s Kimmelot, as well as MGM Television