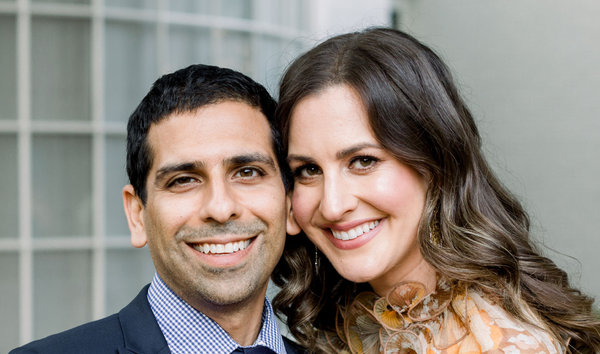 Justine Victoria Roach and Hrishikesh Padmanabh Desai were married March 21 at the home of Ms. Roach’s parents in Beverly Hills, Calif. Rabbi Laura Geller officiated at a ceremony incorporating Jewish and Hindu wedding traditions. The couple had planned to wed at the Ojai Valley Inn, a resort in Ojai, Calif., before the Centers for Disease Control recommended that events with 50 or more people should be postponed.

The bride, 31, is a licensed clinical social worker and therapist in private practice in Los Angeles. She graduated from Kenyon College and received a master’s degree in social work from the University of Southern California.

She is a daughter of Jill J. Roach and Dennis A. Roach of Los Angeles. The bride’s father is a sports and entertainment lawyer in private practice in Los Angeles. Her mother is a stay-at-home parent.

He is the son of Swati P. Desai and Padmanabh N. Desai of Louisville, Ky. The groom's mother works as a retail personal banker at Fifth Third Bank in Louisville. His father is a bilingual interviewer and customer service representative at the United States Census Bureau in Jeffersonville, Ind.

The couple met in June 2017 through the dating app Bumble.