Fittings for Iris van Herpen’s latest couture collection took place in the most unexpected places, including a wind tunnel in France and an air field in England.

That’s what happens when your finale dress is modeled by an elite skydiver and you need to know if its fabric, cut and embellishments can withstand the head-first fall to earth – and won’t interfere with the correct deployment of the parachute.

“I kept telling the team that they need to treat the wind as the enemy that’s going to try to destroy their creation,” said Domitille Kiger, whose jump in the second prototype resulted in ripped seams and other damage. “I felt so ashamed. I’d been sent this beautiful couture dress and I was returning it destroyed.”

Earlier, in the wind tunnel, Kiger discovered that the skirt on the first prototype was far too long, and could become easily entangled with the parachute ropes.

Yet for both women, the project was something of a career high: a chance for van Herpen, an infrequent but passionate skydiver, to explore the links between her pre-fashion training in classical ballet with the intricate choreography that divers like Kiger are capable of.

Meanwhile, for Kiger, it might be the only time she wears makeup on a jump, a sculptural hairstyle that took three hours to lock into place, and a dazzling, handmade dress that mutates in the wind so rapidly that even slow-motion cameras could barely capture all the flapping elements. 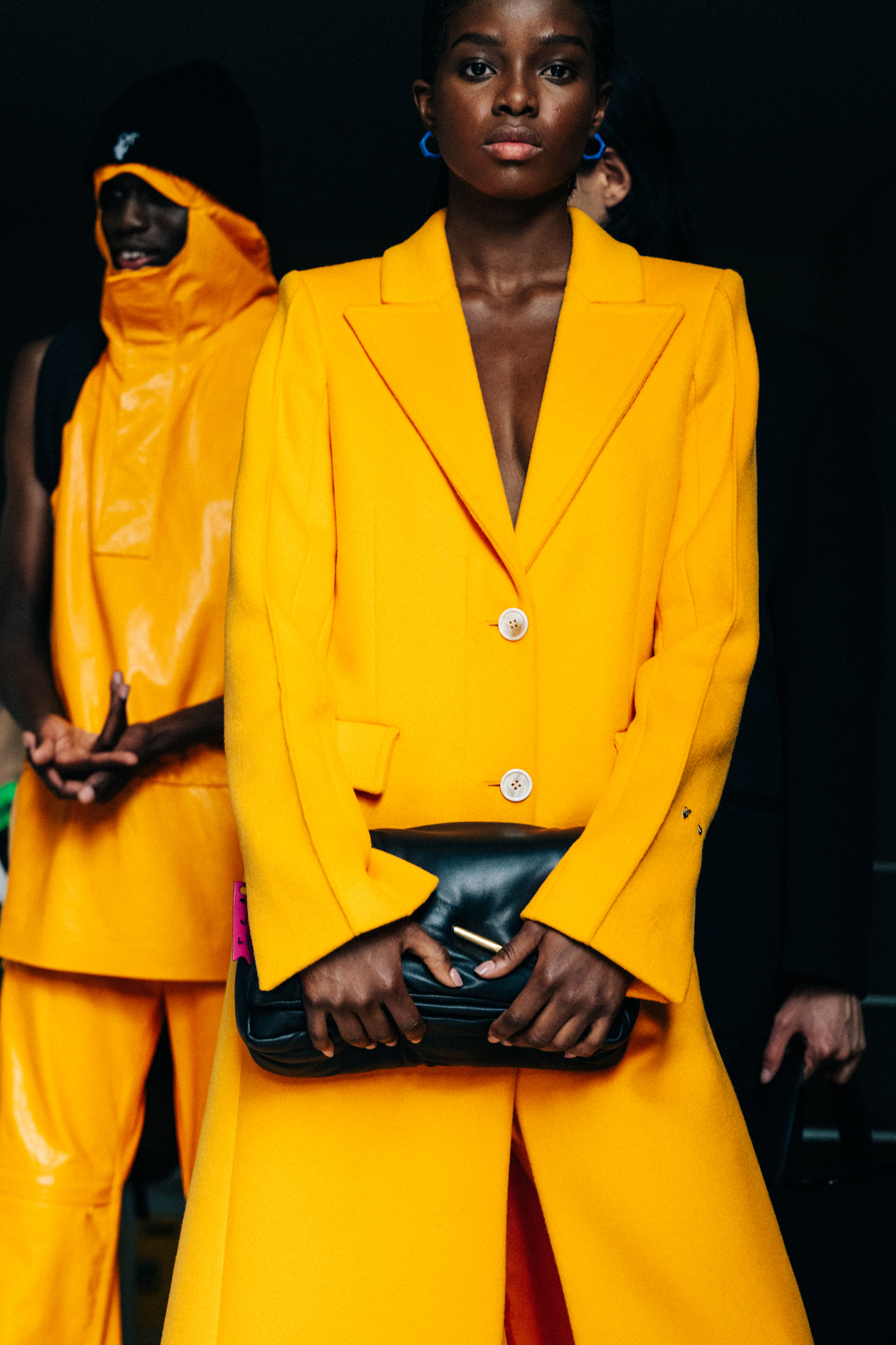 WWD photographed the action on the ground as van Herpen shot the finale segment for her fall 2021 couture film, accompanying Kiger in the small plane for her four jumps, the last with a belly-mounted 360-degree camera. 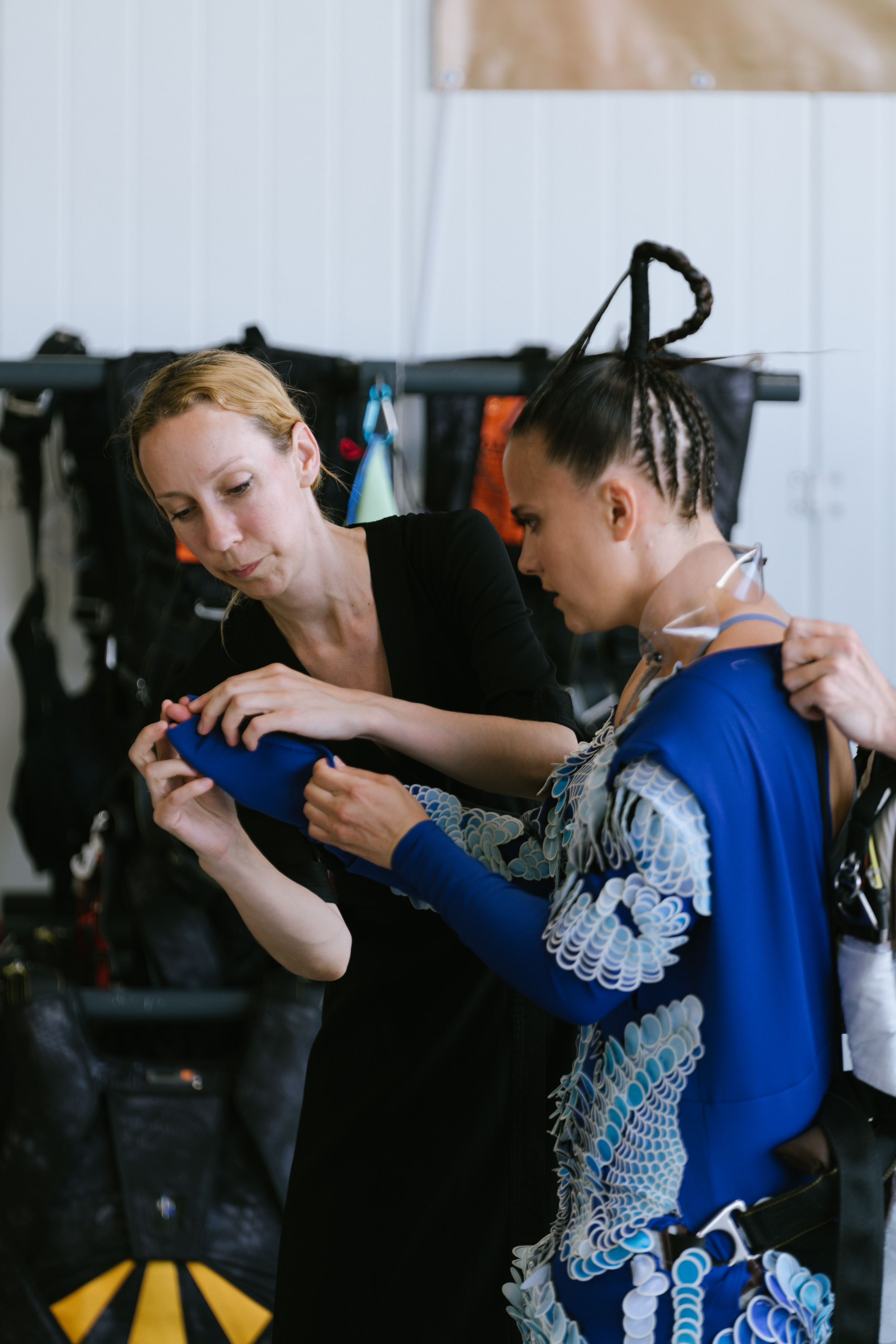 In an interview over Zoom, van Herpen explained that she wished to exalt the artistic side of skydiving with a dress that would stretch and dance in the wind, all in a palette of sky blues and white.

Kiger’s universe “really inspired me to think about a dress in a different way than I would normally. It was about working with gravity because gravity is so inescapable,” the designer said. “It’s working with the elements of nature and trying to enhance them, and embody them.

“The dress is actually stretching because of the force of Domitille’s fall and it creates this really beautiful, elongated silhouette,” she added. “The craftsmanship of the dresses really comes alive, and it goes faster than your eye can follow.”

While the gown fits close to the body, van Herpen added thousands of partially fixed circles of fabric, each stitched slightly differently so they would react differently in the wind.

A FreeFly world champion based in Poitiers, France, who has logged more than 9,000 jumps, Kigor usually steps out of a plane in a tight-fitting, technical jumpsuit, explaining that any loose fabric creates enormous forces during free fall and could potentially interfere with the three handles for opening her parachute. Freeflyers descend in various vertical orientations with complex choreography, as opposed to the usual belly-first drop. 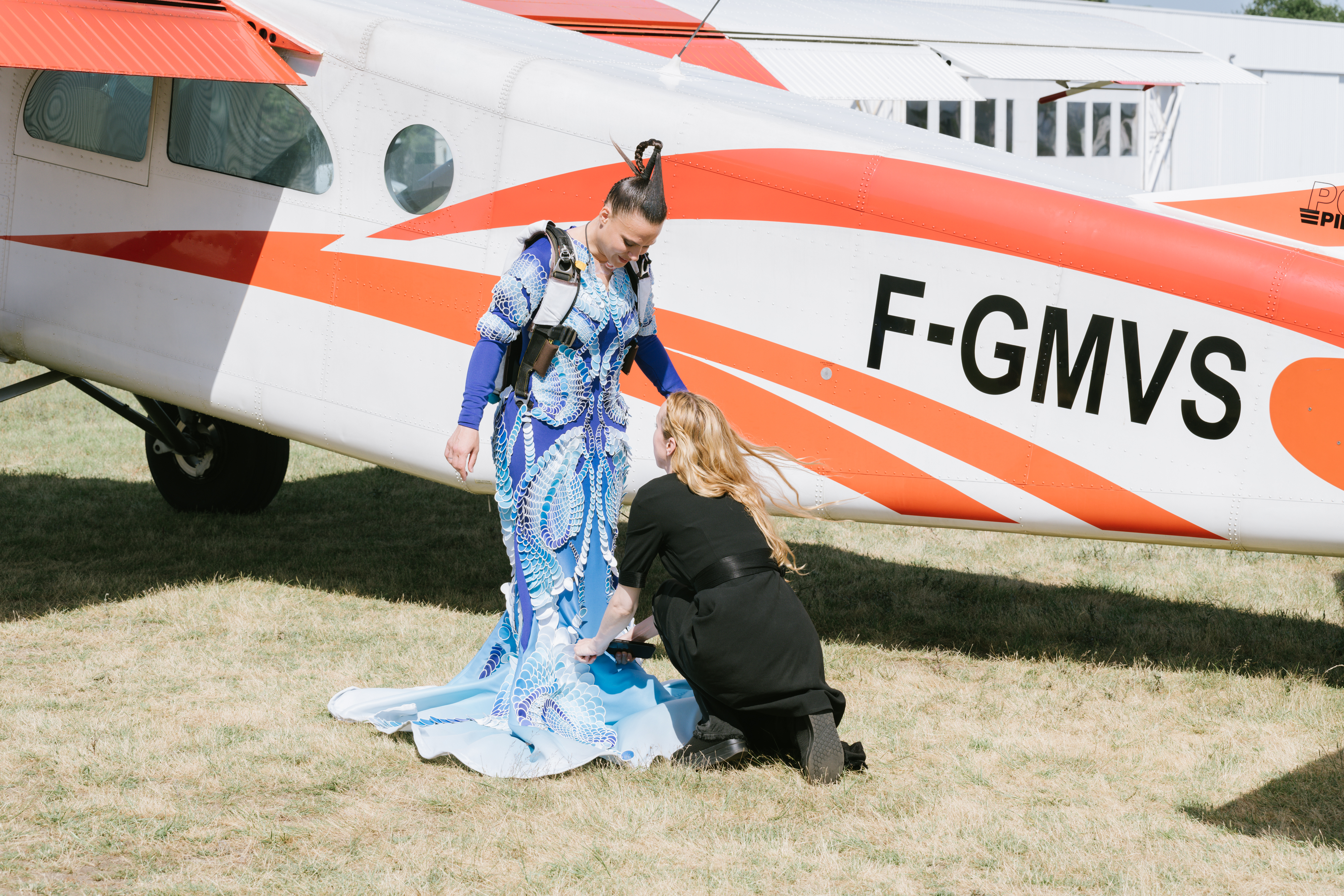 Domitille Kiger and Iris van Herpen ahead of one of four jumps. Vanni Bassetti/WWD

“Skydiving is all about presenting your body to the wind in a certain way that it implies a certain movement, either speeding up or slowing down or moving left or right, forward, backward. So when you have fabric lapping around, it catches the air and it makes some small modification to your movement,” she explained. “What was really interesting about this collaboration with Iris was giving them feedback on what was possible, what was survivable. The dress that I ended up jumping in was the fruit of this discussion. So it was a really, really cool experience for me to be part of this process.”

Famous for her otherworldly couture and delicate craftsmanship, van Herpen embraced the challenge of creating a gown that could withstand a 300-kilometer-per-hour fall to earth — and also impart the wonder that Apollo 8 astronauts felt seeing our blue planet from space; hence all the trembling discs that are the main feature of the gown.

“It’s really this otherworldly perspective that I wanted to bring in as an energy into this collection,” the designer explained. “In that sense, it was really a perfect match in what Domi is doing because it’s really beautiful, how she is really playing with the elements and pushing her own boundaries of what it is to be human, and also how we can extend or transcend our own boundaries.” 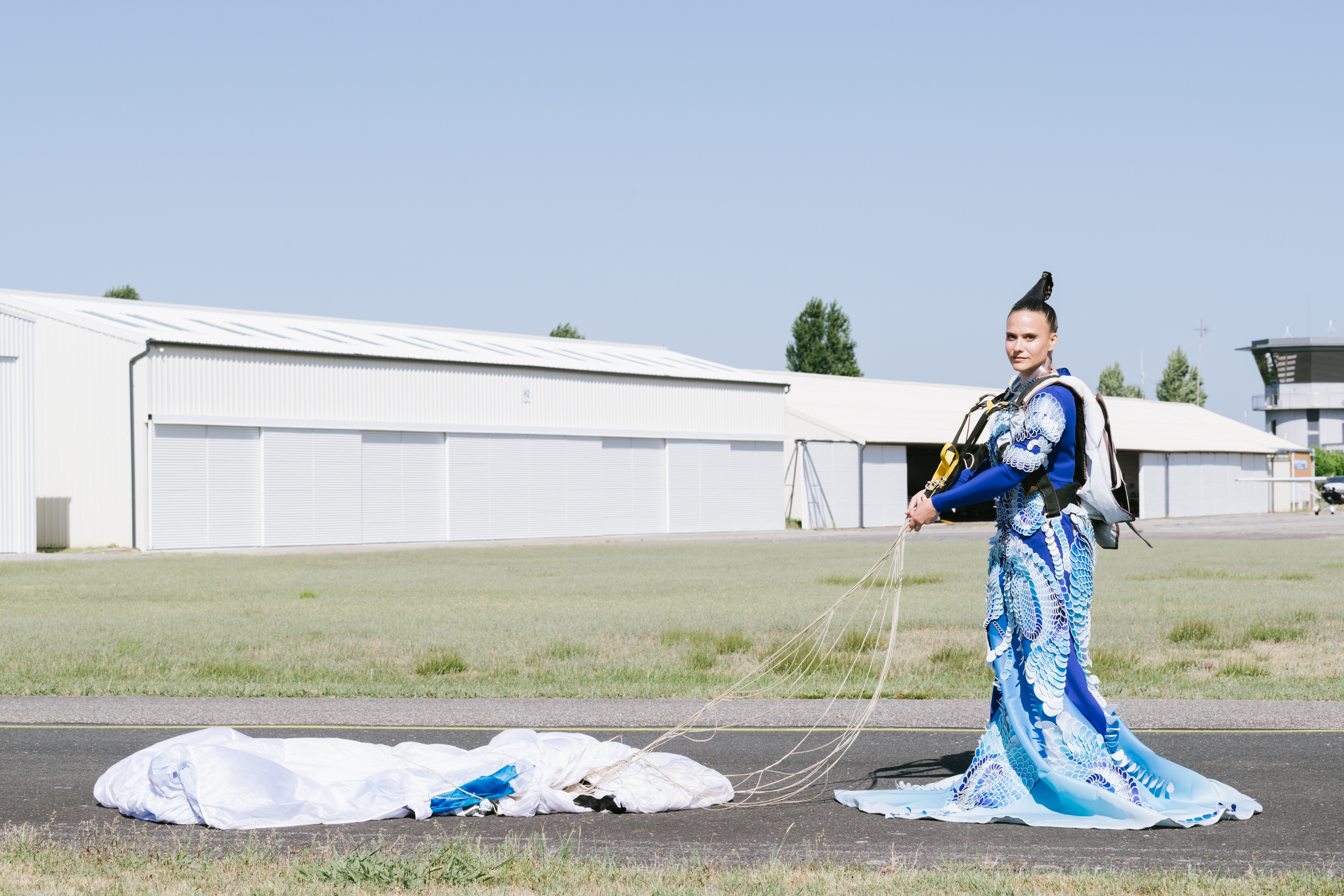 Job one was finding a base fabric that wouldn’t disintegrate during the descent, and van Herpen eventually settled on a Neoprene composite with stretch qualities. To her delight, the hand-stitched discs she chose as the key embellishment — to express the turbulence that Kiger, the dress, and the Earth itself are enduring — held up so well.

In an act of poignant sourcing, the discs are all made of a material from Parley for the Oceans, which recycles ocean plastic.

Once assured that her outfit would not disintegrate, Kiger was free to express the artistic side of skydiving, and the intricate dance between her and the cameraman, Alexandre Aimard. 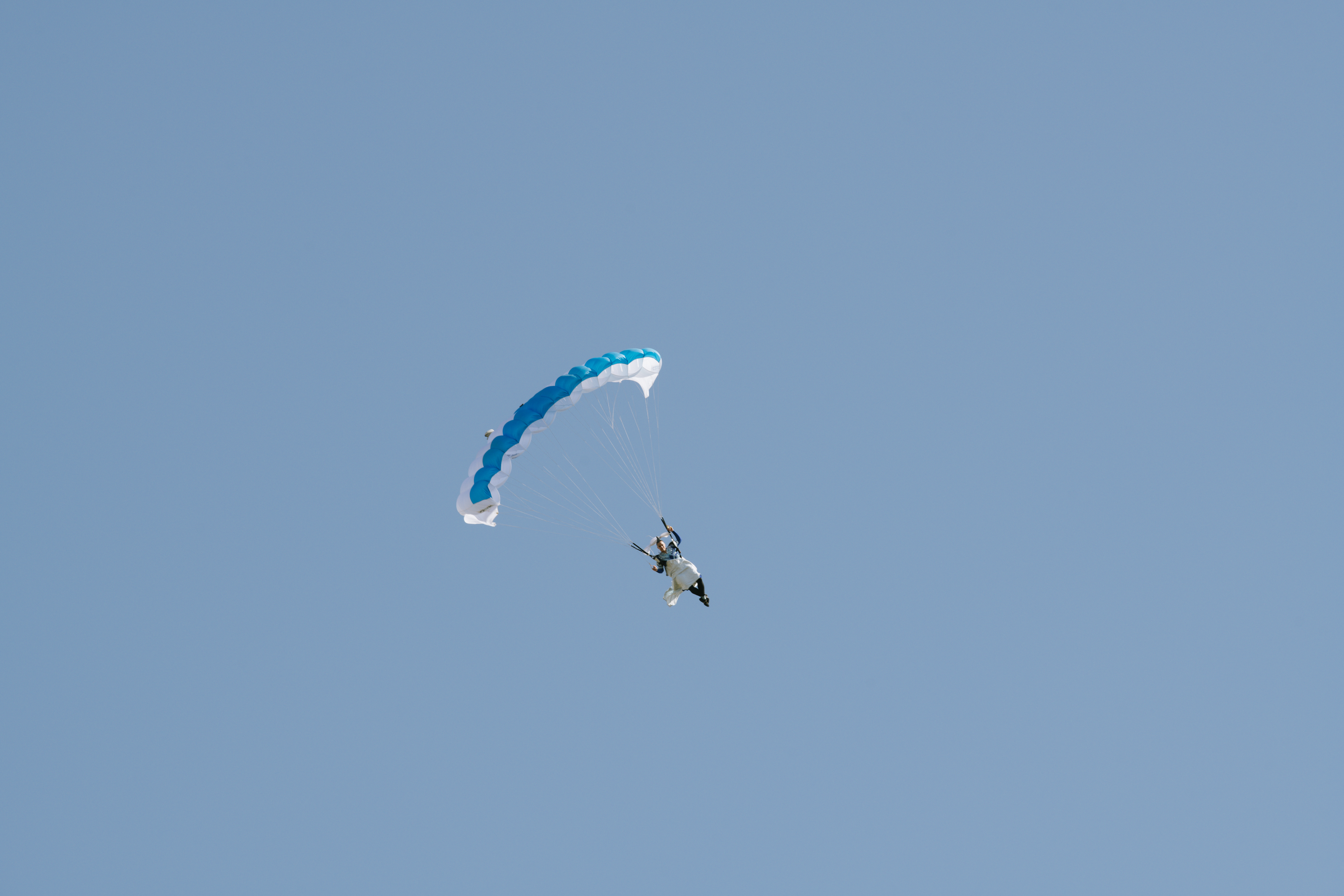 Indeed, the designer, who did her first jump at 17, described being up in the plane with Kiger as “one of the best moments in my life.”

“It was so beautiful to witness how much [Domitille] loves being up there, like the plane and the sky are her natural environment. And it just really touched me,” she said. “It’s magical to be up there and I completely understand the love that she has for her profession.…It’s so full of adventure.”