Home » Beauty and Fashion » I'm in lockdown with my ex, his girlfriend, my new husband & our 5 kids – we ration loo roll & the fights are furious

I'm in lockdown with my ex, his girlfriend, my new husband & our 5 kids – we ration loo roll & the fights are furious

AFTER Katie Blackmer split with her husband Stephen Shepard she vowed they'd never be friends again.

But time's a funny thing and now Katie, 32, is not only his mate – but she LIVES with him.

⚠Read our coronavirus live blog for the latest news & updates 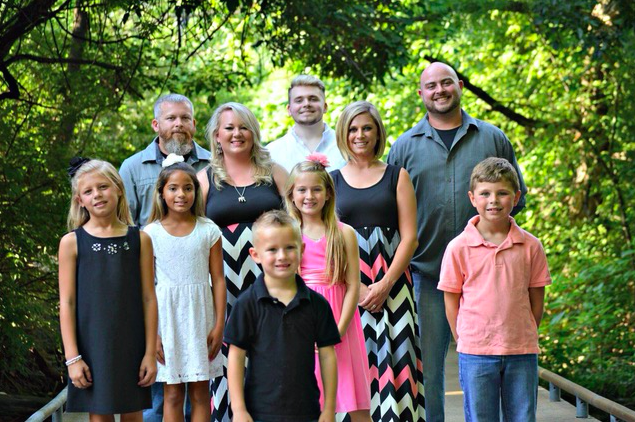 Katie lives in Tennessee with Stephen and their three kids.

Also living with them is Katie's new husband Ben, 42, and Stephen's long-term girlfriend Brandy Henderson, 32, and their two kids.

Meanwhile, Ben's son from a previous relationship, Hunter, 20, is a regular visitor.  But, despite all being isolated together (and loo roll being rationed), they are still getting on famously. 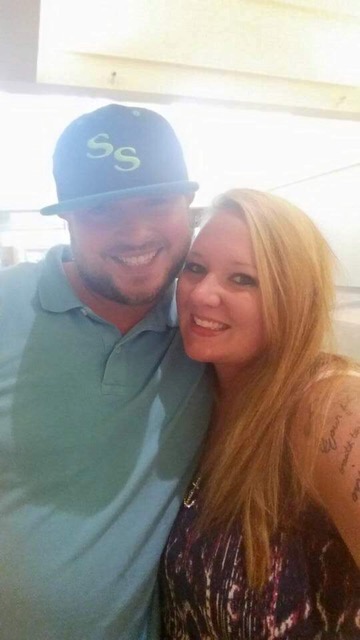 We’ve been on lockdown for the past few weeks and our governor has extended it until the end of April, so we’re not even halfway through.

But we are somehow making this madness work even though sometimes the kids fight caused by the sheer frustration of having to stay at home.

I suppose for most people, the thought of living with their ex-husband would fill them with horror, but for me and Stephen it has made perfect sense.

Together, we share our lives with our new partners, mine and Stephen’s kids Gracelyn, 12, Kaylynn, 11, and Colston, six, and Brandy’s kids Kayleigh, 11, and Jaxson, nine.

Ben’s son Hunter, 20, used to live with us too but he lives in an apartment down the road.

I met Stephen when we were 18 and I was working in a bar – we married in March 2007 and we had our three kids.

They argue about literally anything – lots of cattiness about whose looking at who, which one interrupted the project, who is being mean to who.

Things started to go wrong in 2014 – we were both hotheads who argued constantly.

If he said the grass was green I would argue it was blue just for the sake of it. We were in an awful place, so we separated in the summer of 2015.

Both of us started seeing other people very quickly after we split-up. It was hard seeing each other with someone else and particularly having someone new around our kids.

We were both so bitter that we would make it hard for each other to start a new life. It wasn’t right but we couldn’t stop making each other lives so miserable.

Then I started dating Stephen’s friend Ben Blackmer and things got worse because he was so hurt.

Ben and I married in June 2016 much to Stephen’s anger. 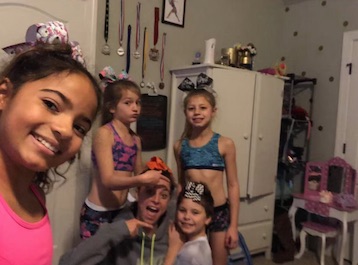 But things came to a head that autumn, when Gracelyn and Kaylynn started softball and Stephen was their coach so we were seeing each other five times a week.

One of the mums came to speak to me and she said the parents were upset with how much me and Stephen argued – it was a wake-up that we had to do better.

That same day, we talked. Neither of us realised how horrible we were to each other and how much everyone saw it. It was embarrassing and we felt ashamed.

So we tried and we all became good friends but in May 2017, life dealt us a terrible blow.

Stephen and his brother Michael were involved in a horrific accident when their car collided with a massive 18 wheeler truck. Michael died two weeks later and Stephen suffered awful injuries.

He had bleeding on the brain and fluid on the spine. I was the first one to get to the Vanderbilt Hospital in Nashville – it was the most frightening day of my life. 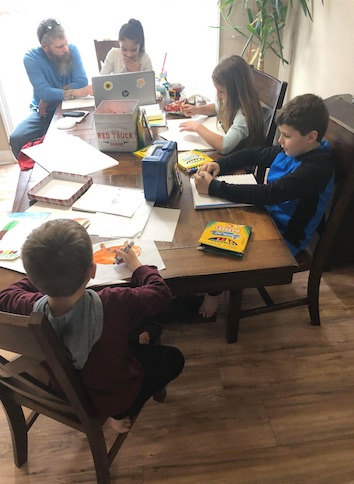 Doctors said he could be released a few days later because he was stable and needed rehab. But he needed 24-hour round the clock care and he couldn’t afford to go to a rehab facility.

He was single and living on his own which meant that he couldn’t look after himself properly. It was natural for him to move in with us.

When I asked Stephen where he wanted to go when he was discharged from hospital he said "with my kids".

So Ben and I agreed that he should come to live with us and we would take care of him. I know it sounds like a lot but it was a no brainer – we wanted to help.

Having Stephen at home was a challenge – it was like having a 200lb toddler. We had to help him to walk, to eat and to bathe while he re-learned many life skills.

Yet with the support of us all, everything started to come back. And he never went home again.

It truly works for us and although it’s challenging being on lockdown and around each all the time, we are managing for the most part.

In December 2017, Stephen started dating Brandy Henderson, my friend from high school. I was excited for him – and the two of them got serious very quickly.

They started to look for a big enough house for them to live in with her two young kids and with mine, as we shared custody, but there was nothing in the area we live in Tennessee.

That’s when me and Brandy came-up with a brainwave – why not all move in together and share the bills?

Now the three girls share a room, Hunter had his own room when he lived with us and the two little boys share a room. We split all the bills 50-50 including the mortgage, food and household essentials.

We organise ourselves with the help of a calendar that is updated each week – we take it in turns to cook every night and each week one parent has at least one kid they are responsible for taking to extra curricular activities.

It truly works for us and although it’s challenging being on lockdown and around each all the time, we are managing for the most part. 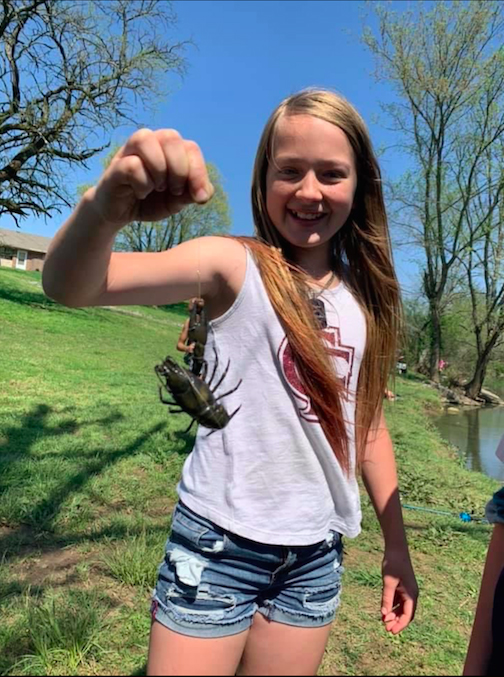 As we are all classed as essential workers – I’m a bookkeeper, the boys both repair ambulances and Brandy works in a nursing home, we have had to be extra organised.

The first two weeks Brandy stayed home to have the kids, then it was Ben for a week and now it’s Stephen’s turn.

My three kids are all athletes and they’ve gone from competing in cheerleading competitions, taking part in baseball and softball tournaments to nothing, so there’s a lot of excess energy there.

They argue about literally anything – lots of cattiness about whose looking at who, which one interrupted the project, who is being mean to who.

We had to break-up a huge fight over a game of kickball in the back garden because Kaylynn is so competitive and Colston and Jaxson weren’t taking the game seriously enough!

The girls gang up on their little brothers. The boys want their older sisters to play kick ball or video games but most of the time they’re just not interested which causes the boys to plague them.

Give now to The Sun’s NHS appeal

No matter how little you can spare, please donate today here thesun.co.uk/whocareswinsappeal

Jaxson always says that the girls are princesses who get their own way all the time. This constant bickering is definitely worse during lockdown – they argue about anything and everything you could ever imagine.

When we are all in the house at once, it’s a fight sometimes to get to the bathroom particularly if someone is taking a shower. We have three bathrooms and believe me that’s not a lot. And during these times, tempers get frayed very very quickly.

We’ve had to ration the toilet paper as well as it is so hard to get hold off.

But we have had some good times, too. The kids have painted pictures for the old folks in Brandy’s nursing home to cheer them up. They’ve read books, done crafts, we’ve played games as a family every night.

If I’m honest, this lockdown has taught us all that our lives were too fast before and we have to appreciate each other more.

And while it has been mental in our house at times, we are so fortunate to have each other to fight with!

These three aren't the only racy lot…. meet the couple who won’t stop swinging now they are married – and even enjoyed a four-way sex session on their honeymoon.

In more sex news a woman claims she has sex with ELVES… and they know exactly what you want in bed without asking.

And a great-granny, 91, gushes about her "wonderful" sex life with a 31-year-old toyboy.