A WOMAN has revealed she didn't fancy her boyfriend when she saw him on Bumble two years ago – and only swiped right for his dog.

When Kayla Moyes, 24, first saw maths teacher Sam Taylor’s profile in November 2017, she admits she was only interested in the “chubby ginger guy with the bad haircut” because of pics of his pug Gary. 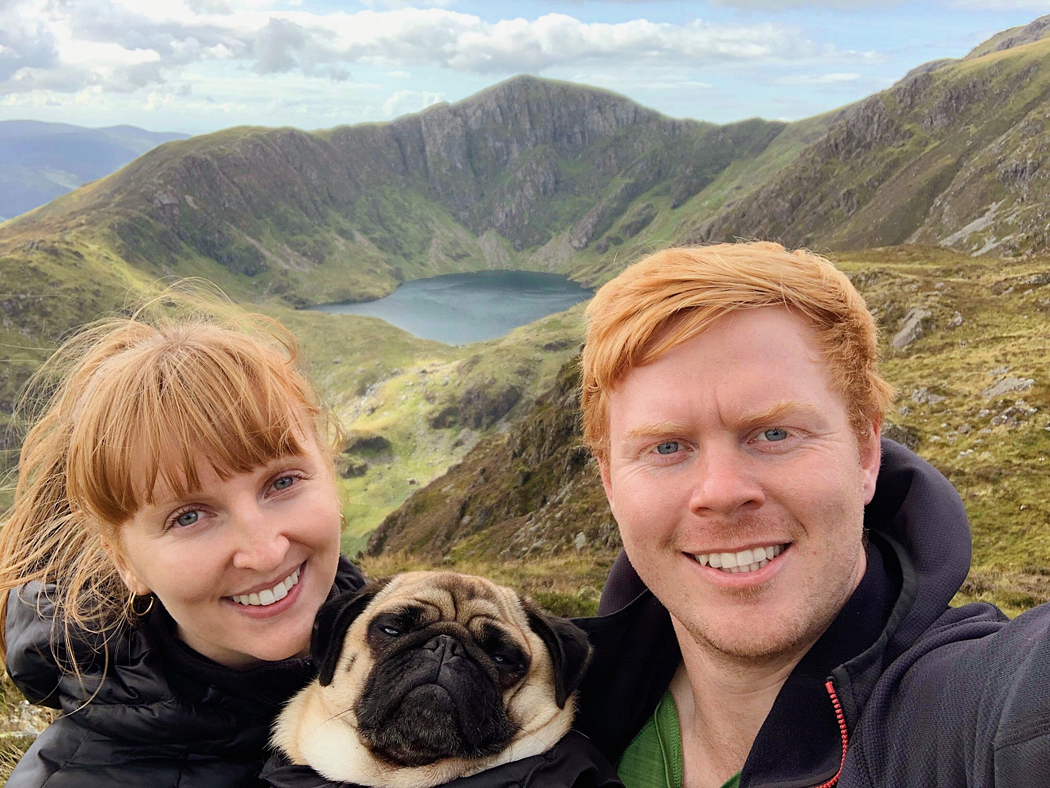 Pining for her own pet pooch Trixy, who was more than 4,500 miles away back at her home on Vancouver Island, Canada, the student, who had moved to Cardiff, Wales, to do a media management degree, thought she would give him a chance.

Now the she Sam, 27, and Gary all live together in Cardiff and spend their free time travelling in a souped-up caravan.

Kayla, a PR Executive, said: “If Sam hadn’t posted a picture of Gary on his Bumble profile, I wouldn’t have swiped right.

“He wasn’t my type at all – but he did have a picture of him with a cute dog.

“At the time, I was suffering from homesickness, and was missing my pet cockapoo Bichon, Trixy, who was back home in Canada.

“So, I thought, ‘If I swipe right for this guy and end up going on one date, then at least I can pet his dog.’ I knew it wouldn't be a complete waste of time if we didn't get along.” 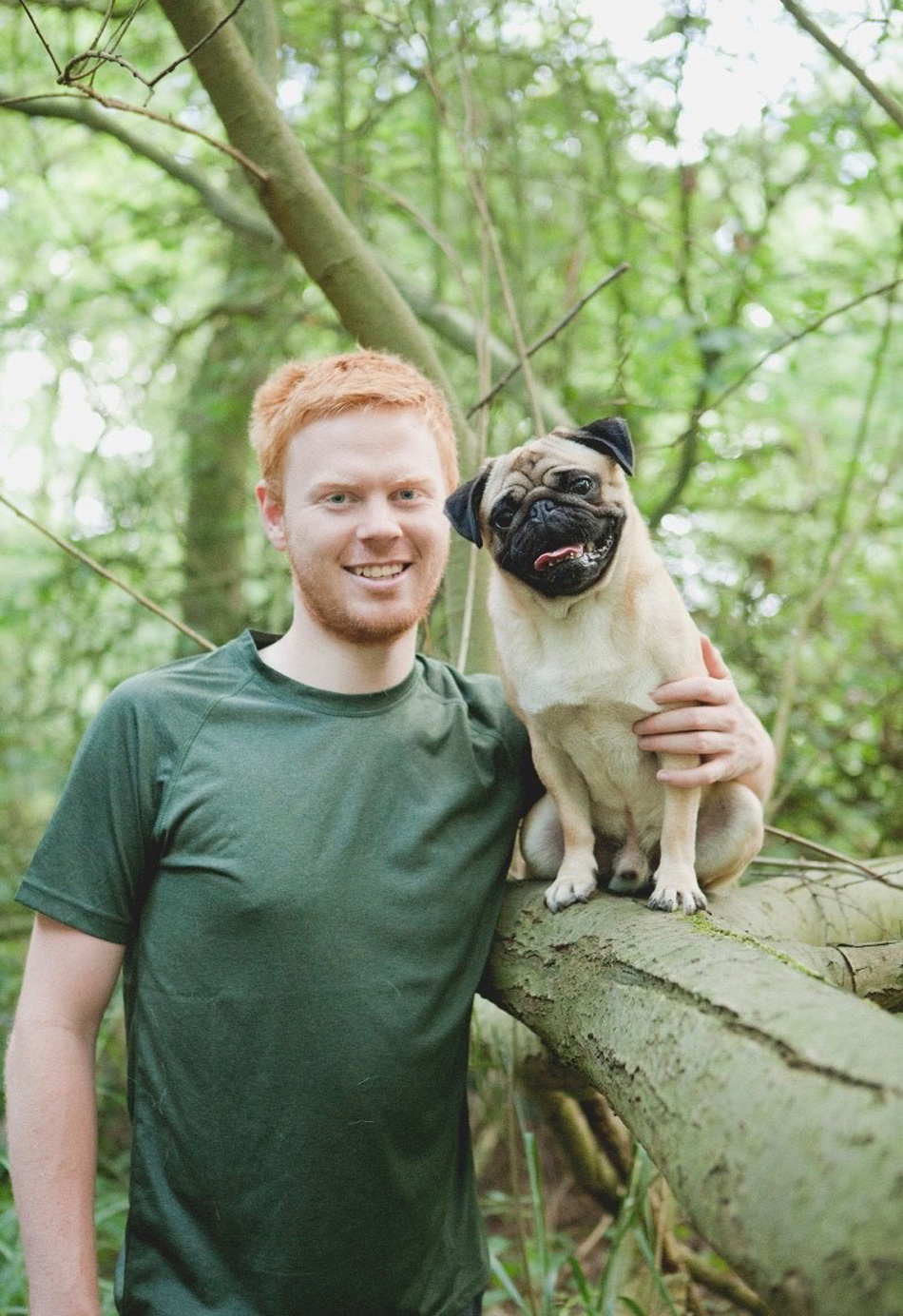 With great grandparents who lived in Newport, Kayla was well acquainted with Wales, so it was not a big leap for her to move to the capital to study an MBA at University of Cardiff in August 2017.

But, with the pressure of her course taking up a lot of her time, she found it difficult to meet people.

So, feeling lonely, she turned to dating apps in November 2017 – specifically Bumble, where women have to speak first.

If Sam hadn’t posted a picture of Gary on his Bumble profile, I wouldn’t have swiped right. He wasn't my type at all

“It was difficult to make friends because my university course was very much ‘Get your head down and get stuck into books,’” she said.

“After a while, the excitement of living in Cardiff wore off and I was all too aware that I was a 13-hour flight away from home.

“I really didn’t like the idea of meeting guys out in a bar, because I’m not a big drinker.

"I thought on dating apps I might have more of a chance of meeting someone with similar interests to me, so I downloaded Bumble."

After seven days of swiping, Kayla stumbled across Sam’s profile, filled with adorable snaps of his pet pug Gary.

After three weeks of chatting online, they decided to meet in person.

On their first date in December 2017, where they went on a stroll together, Kayla was pleasantly surprised when Sam's sense of humour won her over. 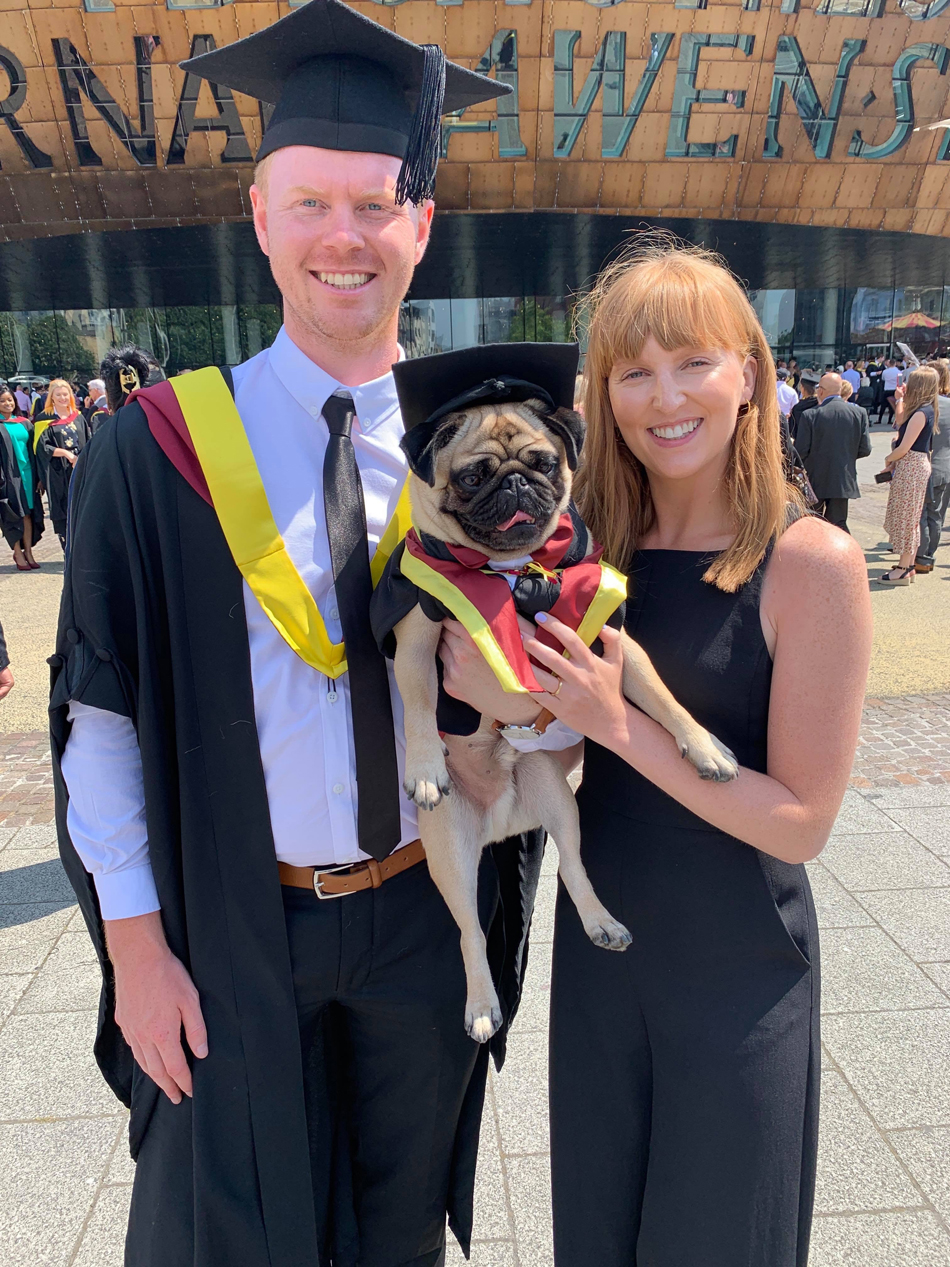 "Considering I'd only swiped right because of his pug, we had a lot in common," she said.

"We both loved hiking and had actually been on the same hike, up the Garth Mountain in Wales, within days of each other – which is quite a big coincidence.”

Since then, the pair, who became an official couple in February 2018, have gone from strength to strength.

Kayla now believes finding Sam, who she firmly believes is “the one”, was fate.

I have told Sam that Gary was the reason I swiped for him, we just laugh about it

"I have told Sam that Gary was the reason I swiped for him," she said. “But we just laugh about it and think of it as fate.

“I do think I had subconsciously been looking to meet a man with a dog.

“That one picture of Sam and Gary changed my life – if he hadn’t posted that picture, I would be back home in Canada by now.

“Sam’s definitely had a glow up since I’ve been with him – all the hikes mean he’s lost weight, and he’s got a better haircut. I’ve tried to help him out with his fashion choices too.

“But even still, I wouldn’t change him or Gary for the world – I’m the happiest I’ve ever been.” 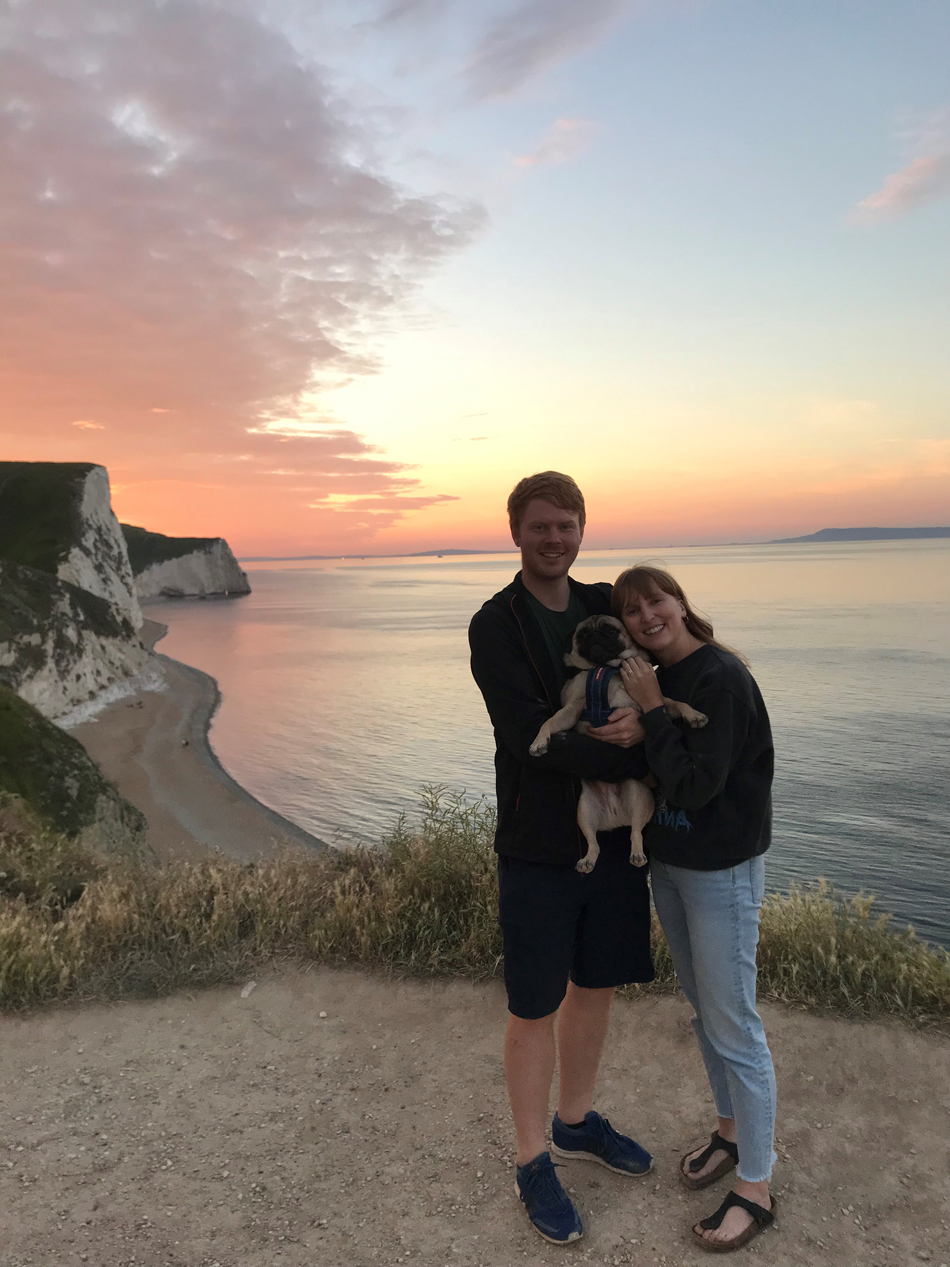 Kayla continued: “I fell for Sam quickly, because I didn’t really have many friends or family in the UK.

“We started taking Gary on three hikes a week and our love blossomed from there."

Sadly, in April 2018, Kayla's dog Trixy passed away aged 14, after suffering a tumour in her body and her head.

During what she calls the “worst month” of her life, she leant on Sam and Gary for support.

"Losing a pet is like losing a family member,” she said. “But Sam did all he could to help me, and Gary is so clever.

"He must’ve known I was down because he was always coming over to me for cuddles.” 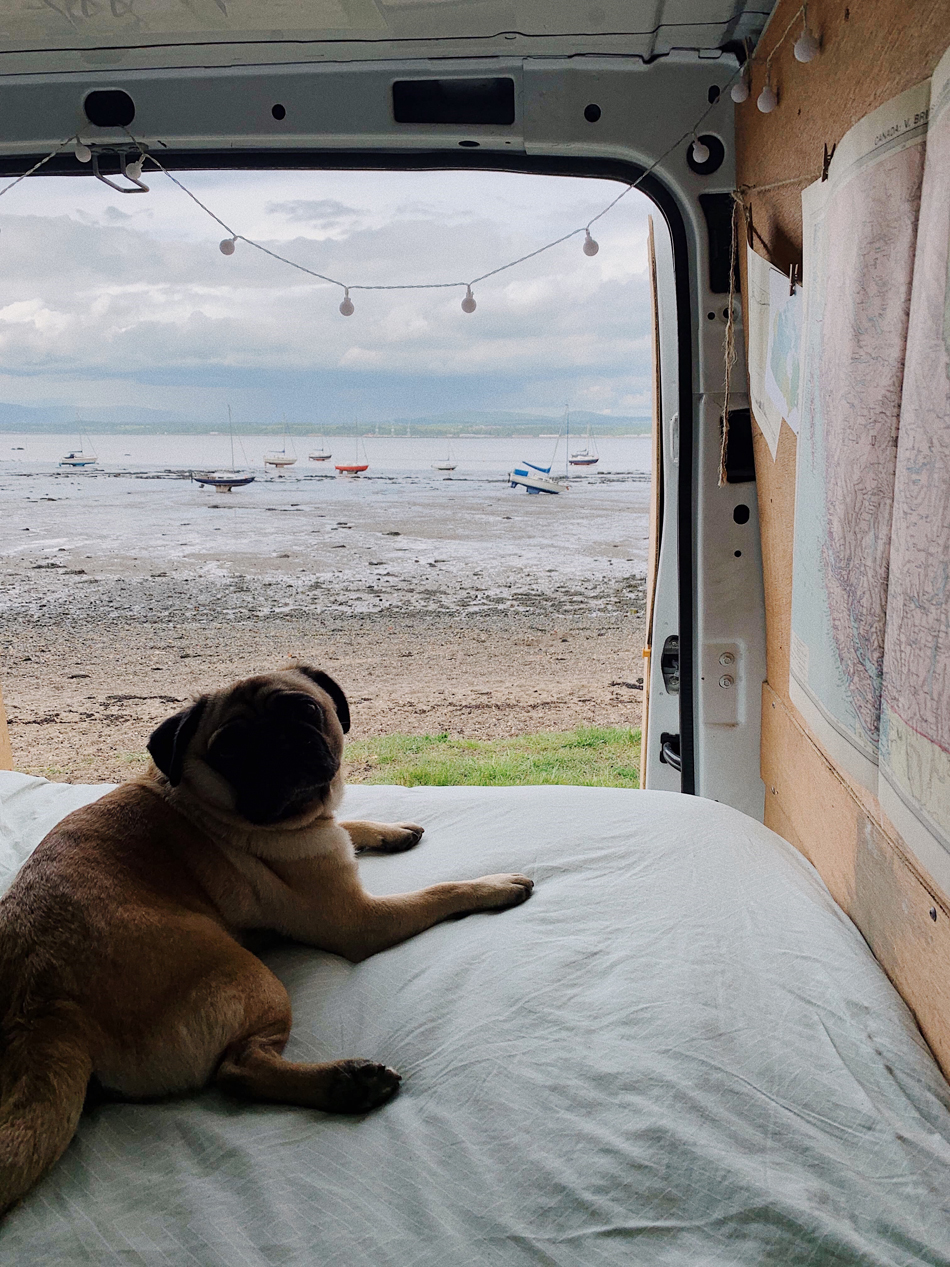 Their relationship went from strength to strength and once Sam, who had been studying economics at Cardiff Metropolitan University, and Kayla had graduated from their respective courses, they finally moved in together in August 2019.

Around the same time, Sam's mum Yvonne, 64,  gifted the couple an old work van belonging to his dad Clive – who died aged 65 from liver cancer in 2015 – from his job in the construction industry.

Seeing the Ford Transit van as a makeover project, the couple spent a week and around £1,000 transforming it into their very own home on wheels.

“We built everything from scratch, installing a bed, cooking section and all the usual mod-cons you'd get in a campervan,” added Kayla.

Since completing the renovation, the couple have dedicated all their spare time to travelling the country in their van.

Venturing out almost every weekend and holiday, they make sure they live off-grid while on the road.

They are, of course, joined by Gary on their adventures, who sits in his special seat next to the window.

"At the moment, Sam and I – with Gary of course – travel across the UK every chance we get,” said Kayla.

“We've been to Dorset, Edinburgh, Cornwall, the Lake District – and we’ve covered every inch of Wales.

“Eventually we want to quit our jobs and go on a worldwide road trip. The dream would be to go to North America – but we need to save up for that."

Preferring not to pay for hotels, the couple will phone local farmers to ask if they can stay on their land for free, or a small fee.

If they can't find a farm, they will park up along dirt roads or somewhere safe by the sea.

They document their expeditions on Instagram @gary_apricotpug, where they have almost 300 followers.

"We try to find special beauty spots like a well-known landmark, or a mountain summit to take the pictures of Gary in front of,” said Kayla.

"He loves doing the photoshoots. He does all sorts of poses and loves that he sometimes gets a bit of a crowd of people who all want to take his picture.

"It's just a bit of light-hearted fun, but I'm sure if Gary had it his way, he'd love to be a proper verified doggy influencer."

Kayla is far from alone for picking a partner for her pet.

Laura Crotch Harvey, Nutrition Manager at Burns Pet Nutrition, said: “Two thirds of people we surveyed said they would be more likely to fall for someone if they love dogs, and over half wouldn’t even pursue a relationship with someone if that person didn’t like dogs at all.

“It’s no surprise then that many singletons looking for a partner online include a picture of their dogs on their dating profiles to boost their chances.”