Tisha Alyn Abrea is on a mission to smash stereotypes. At age 27, the athlete has already penetrated the world of professional golf, made a name for herself as a sports broadcaster, and worked as an ambassador with impressive brands such as PUMA. As a Filipina American and a proud member of the LGBTQ+ community, Tisha has also been outspoken throughout her career, constantly championing not only women in sports, but women empowerment as a whole. In short, she’s much more than a talented athlete and media personality. She’s an influencer, an entertainer, an advocate, a role model, and, most importantly, a mover.

“I want to keep inspiring girls and women, to keep motivating them, and to keep pushing boundaries for females in sports and for females in general,” Tisha told POPSUGAR. “It’s important to keep shedding light on our stories.” One of the ways she’s doing just that is with PUMA and the brand’s SHE MOVES US campaign and platform. SHE MOVES US celebrates and inspires women who move together to achieve and connect — through sports, values, and culture.

SHE MOVES US has allowed Tisha to be part of something bigger than herself. “PUMA is celebrating all women across the board and creating a space for collaboration, which makes me so excited,” she said. “This type of unity of artists and professionals across various fields wouldn’t have happened without this campaign.”

From amplifying women voices to sharing her experiences to revealing the decision behind her coming out, read on for Tisha’s advice and wisdom — including the powerful phrase she lives by — and to learn how she’s determined to make a difference. 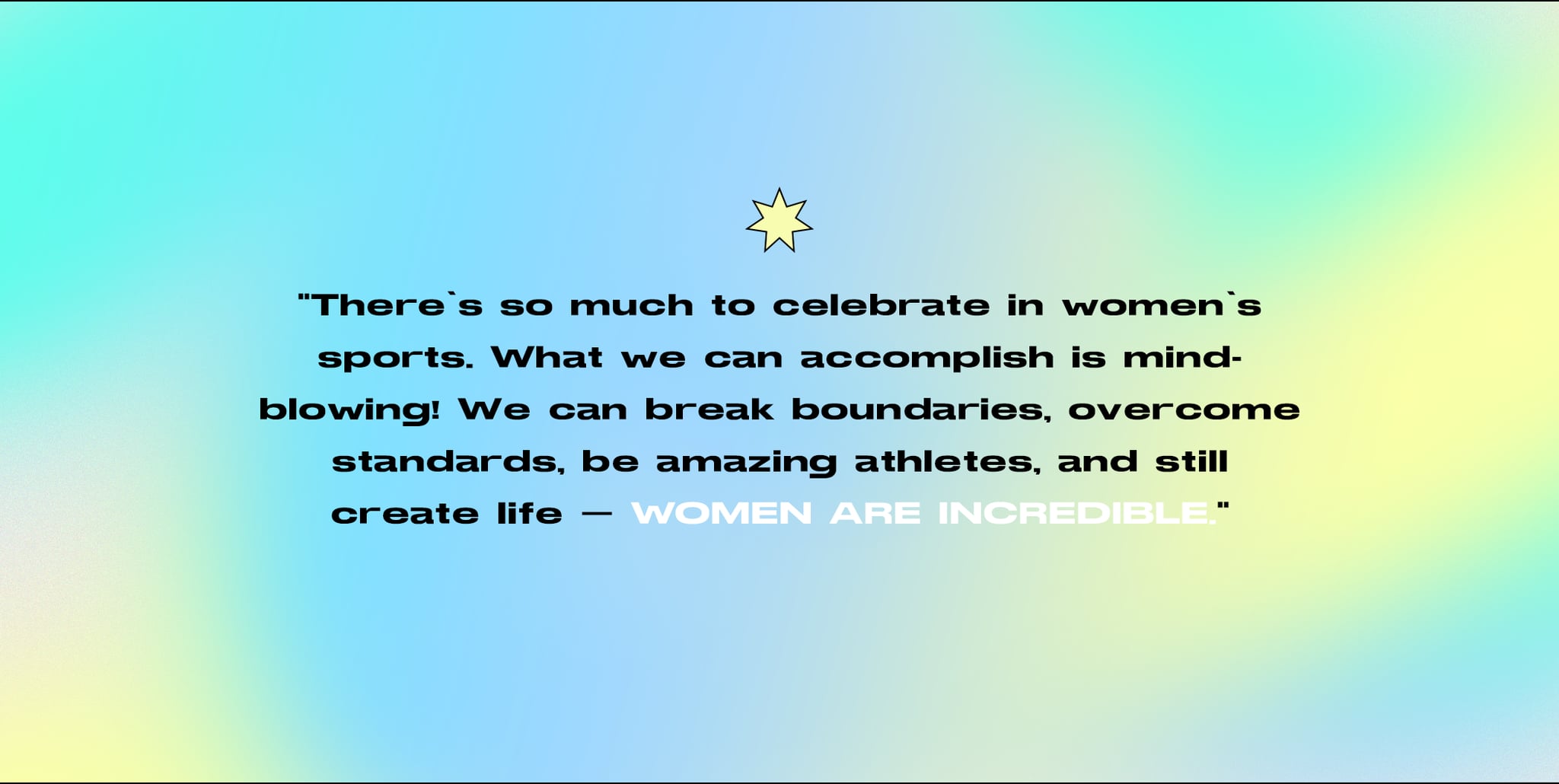 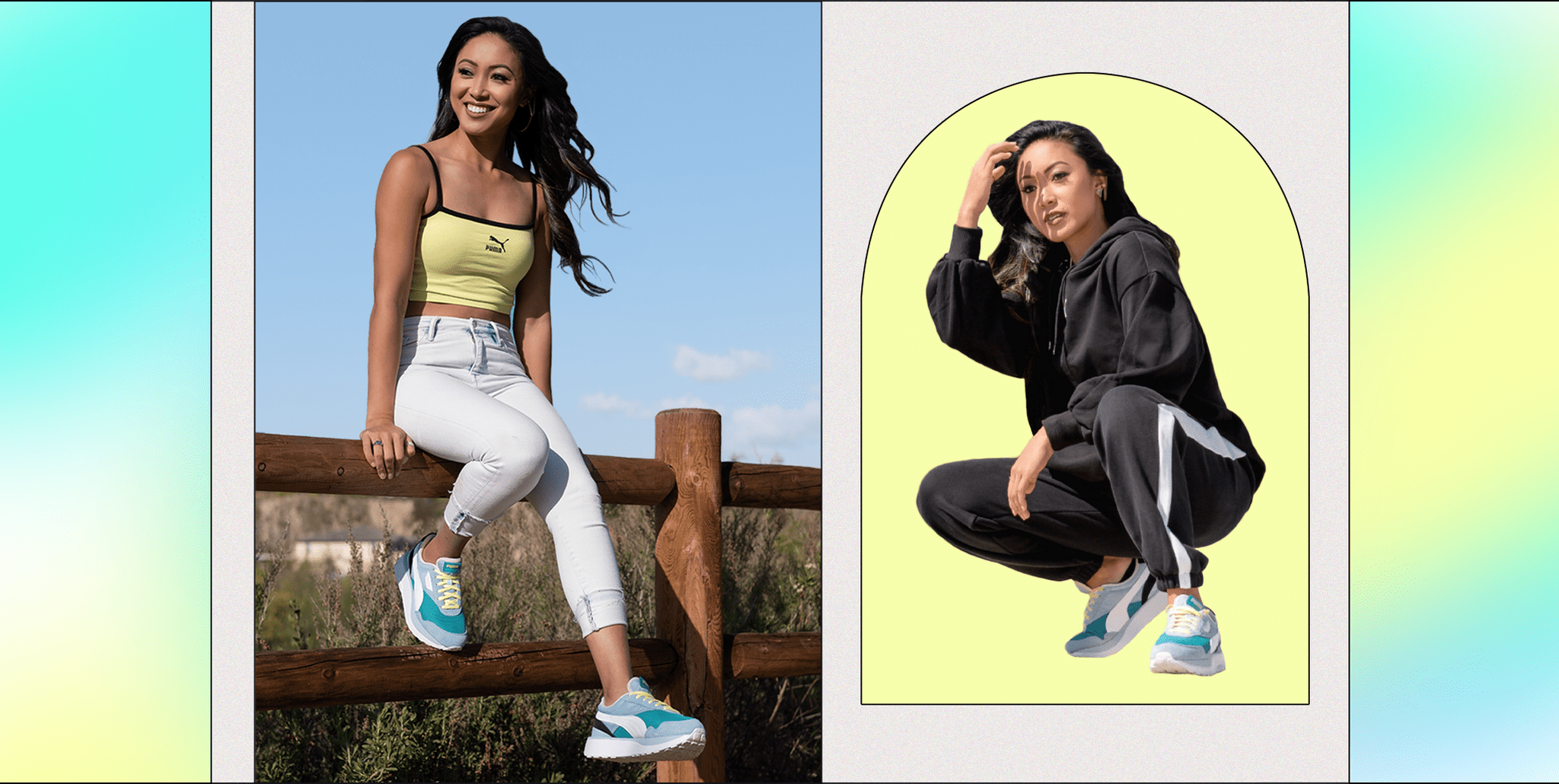 Tisha can’t remember a time when a golf club was not in her hands. She was just 3 years old when she began playing, 7 when she started competing, and after college, she promptly turned pro. “I had always known that professional golf was going to be my path,” Tisha said. “It was a light at the end of the tunnel for me, and I always knew it’s what I wanted to do.”

But what Tisha didn’t see coming was the effect social media would have on her career. “I just happened to fall into that social media bubble — especially with Instagram,” she said. “That’s not something that you entirely study for, but I took advantage of the moment.” And while now Tisha loves connecting with her followers, working with brands, and using her platform to spread positivity, at first she didn’t understand its value.

“I’ve always been ability-driven and I’ve always wanted my scores, my game, my results, and my accomplishments to speak for themselves,” Tisha said. “But at some point when I turned pro, I knew that as a female, you not only have to have the athletic ability and the talent, but you also have to be marketable. I knew I had to create that marketability for myself.”

As a result, Tisha became more than just marketable. She built a brand and a loyal following, effectively turning her passion for sports and advocacy into a calling. “It’s important to share these stories because being a young girl comes with enough pressures already,” Tisha said. “Having female role models and seeing them crush their goals helps girls realize they can do that too.” 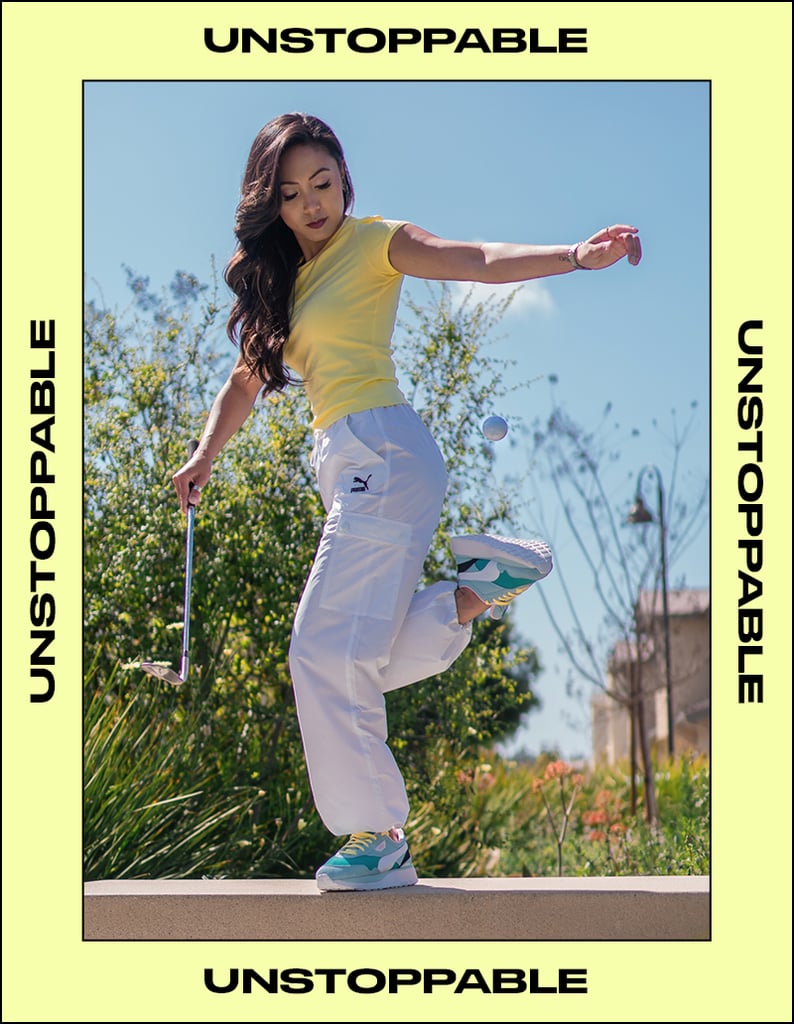 Early on, Tisha discovered what it was like to be a minority woman in a man’s world. Not only did she realize women had to work harder and be more marketable, but she experienced hurtful bias firsthand. “My family raised me to always look at difficulties as challenges to overcome,” Tisha explained. “And looking back, there were always a lot of things to overcome. I remember being a young girl golfer in the city I was living in — a very heavily white-dominated area — and there were times that had me questioning if I had what it takes to make it based on my skin color; if I had what it takes to be marketable in the future.”

Even after nearly 20 years, one situation in particular has stayed with her. An 8-year-old Tisha, who was already relatively established in the golf world, was practicing on the range with her dad. “I’ll never forget when an older white man approached my dad and I heard him tell my dad that, because of my skin color, I would not be able to make it far or be very successful.” While those words stung in the moment, Tisha never forgot how her dad handled the shocking encounter.

“He explained, ‘No matter what you do in life or where you go, know that nothing can ever stop you. You create your own future and it doesn’t matter what people say.’ Being raised with that attitude has really helped me,” she said. “I’ve always been very grateful for my opportunities and I never regret those hard moments. I take from them and learn.”

Unfortunately, the intolerance didn’t end there. “Throughout my career there have always been difficulties and pushback in literally everything — just being a female in a man’s sport,” Tisha said. “People didn’t always want to invest in female golf, which is always something I shed light on and push for. There’s so much value in female athletics and there needs to be more attention on them.” 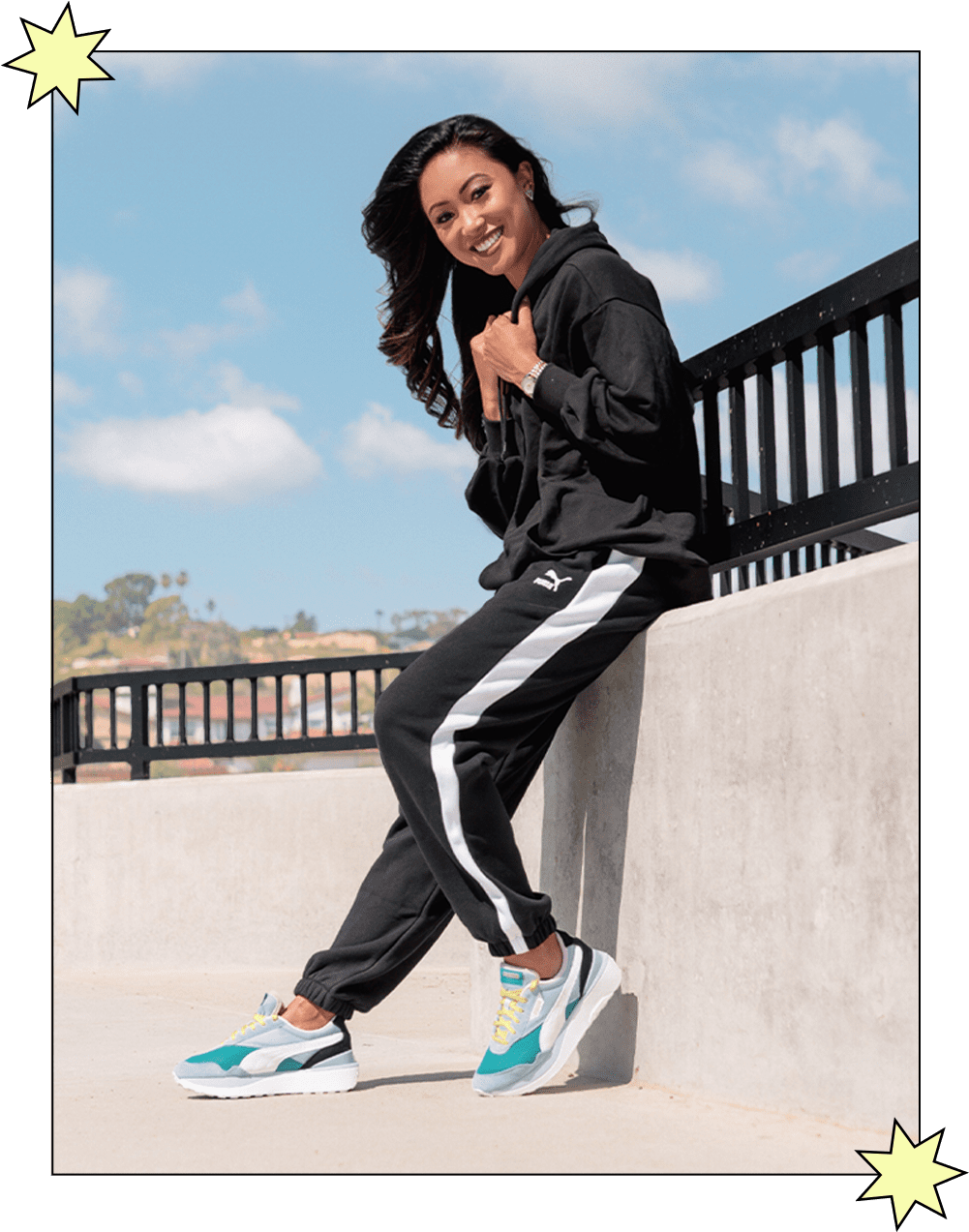 Helping Tisha through those tough times, celebrating happy moments, and shining light during periods of self-doubt is an unwavering support system built predominantly of strong, determined women. “Having a strong girl gang beside me helps me feel empowered — it’s really what keeps me going,” Tisha said. “I’ve developed a really close sisterhood within the golf community that I look to and lean on, but it’s more than that. All of the females in my life are truly people that I can’t live without.”

One of those women is her mother, whom, at 4’11”, Tisha describes as a firecracker; a loving, no-nonsense woman who has taught Tisha to stand up for herself and command respect. “My mom has always been my biggest inspiration,” she said. “She’s the reason I want to wake up, grind, and make things happen.” One of the biggest lessons Tisha’s learned from her mom? “It doesn’t matter how big you are or what size you are, knowing what you do and being really great at your craft speaks louder than words.”

Even when she isn’t feeling particularly strong, Tisha’s girl gang is always there to lift her back up and remind her of what truly matters. “I feel most empowered when I’m doing what I love and when I’m doing it well,” she said. “But when I am going through difficult times and not performing at my best, I remember that a good friend would always tell me that there’s always going to be a tomorrow. To this day I think of that. During hard moments, you may think that this is it. But when you remember there’s a tomorrow — another day to improve, try again, or change the narrative — it can provide a sense of calm.” 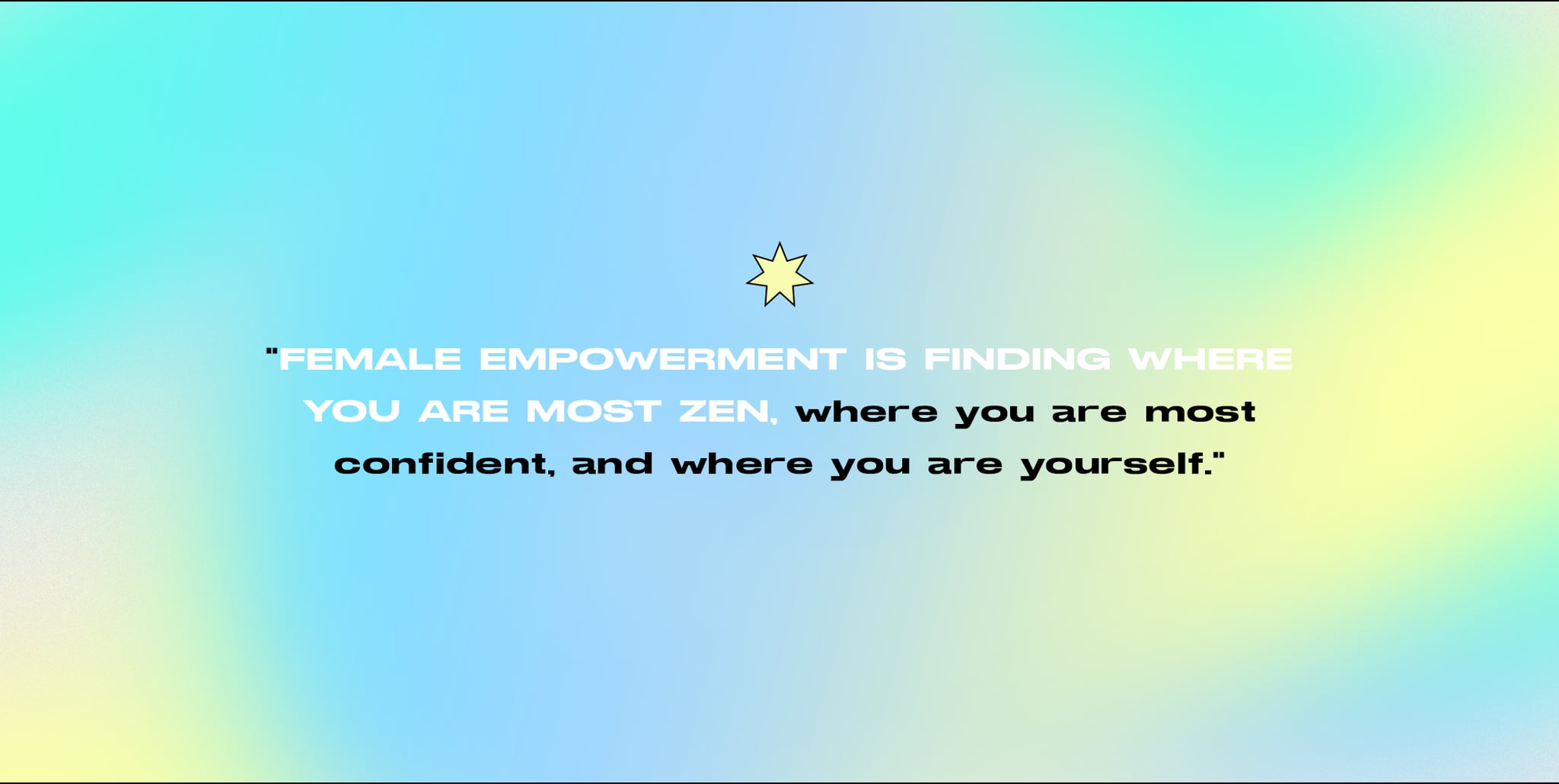 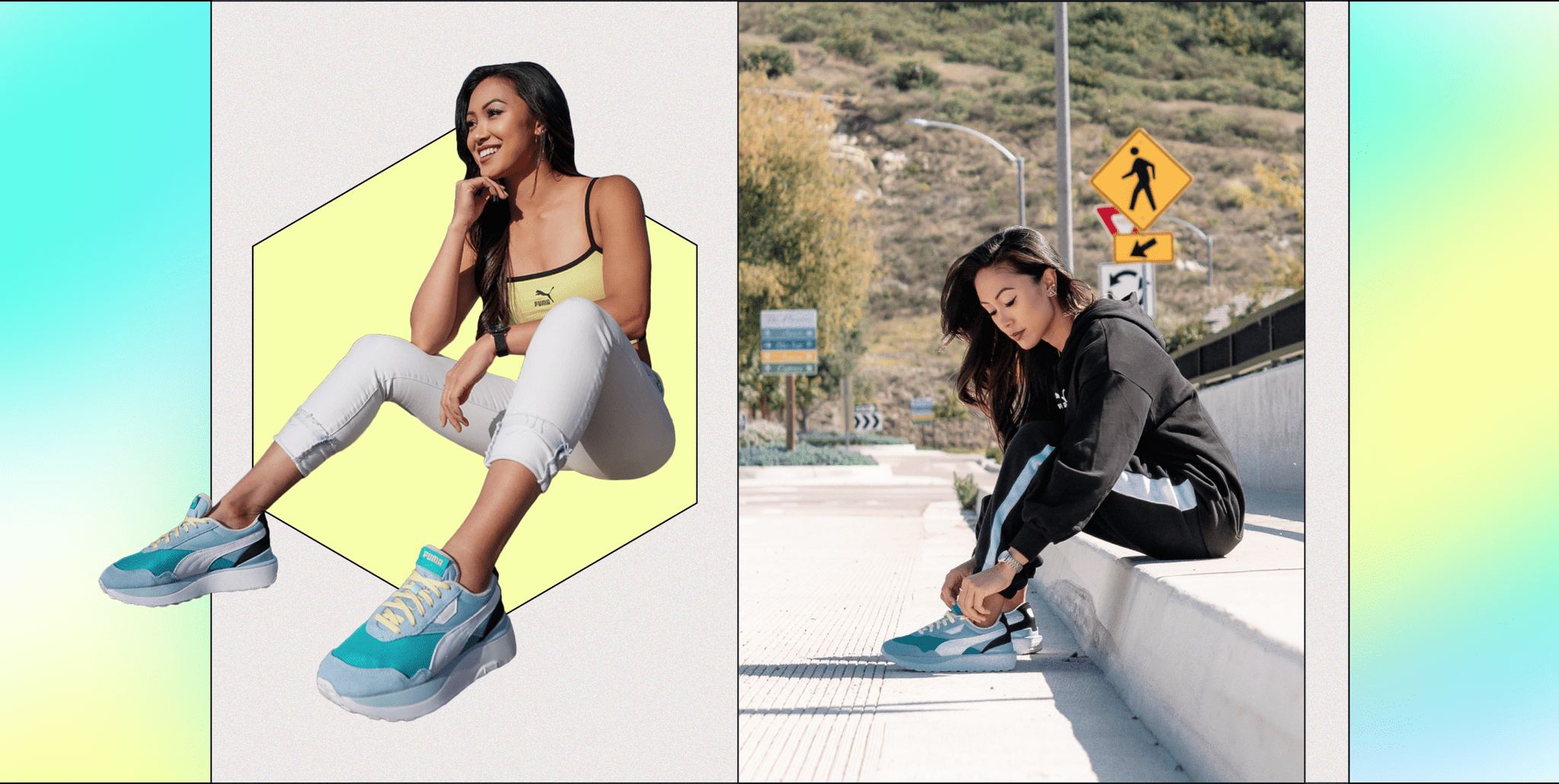 The love, advice, and unconditional support from Tisha’s friends and family have helped shape Tisha into the person she is today — including giving her the strength to be her authentic self. In 2019, she bravely shared her coming-out story with the world, after previously coming out to her family at age 23. “I was able to make the decision to go public because I knew I had my family and all of my closest girl friends by my side,” Tisha said. “I knew that whatever the public response was going to be, it didn’t matter because I had them.”

And although freedom to live her truth was part of her decision, she didn’t just come out for herself. “There is an LGBTQ community in women’s golf, but it’s just not spoken about,” Tisha explained. “My goodness, I wish I had that representation during my times of difficulty. I remembered how I felt in those hardest moments and I knew that someone had to speak. I wanted to be that person so that no one else would ever feel alone.” 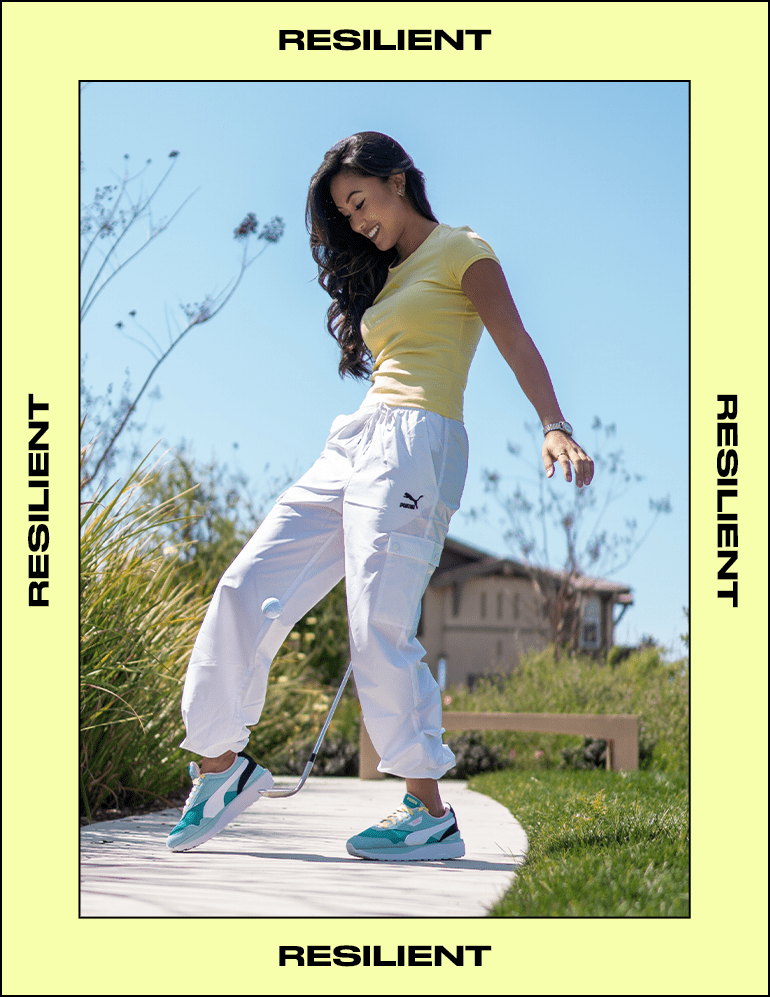 For Tisha, PUMA and its messaging isn’t just a campaign — it’s a lifestyle. Whether she’s working out or not, Tisha can almost always be spotted wearing PUMA gear. She describes her style as sporty, and when getting dressed, her number one priority is feeling confident.

“PUMA does a great job of creating a lot of variety, which I think is key,” she said. “I also love how vibrant its designs are. It’s so powerful to be able to rock color, especially on the golf course.” PUMA’s new Cruise Rider sneakers in particular have become a fast favorite for Tisha. “I love the fun colors and the height they give me,” she said. “I’m always on the move and these shoes are perfect for that. They’re also super stylish.” 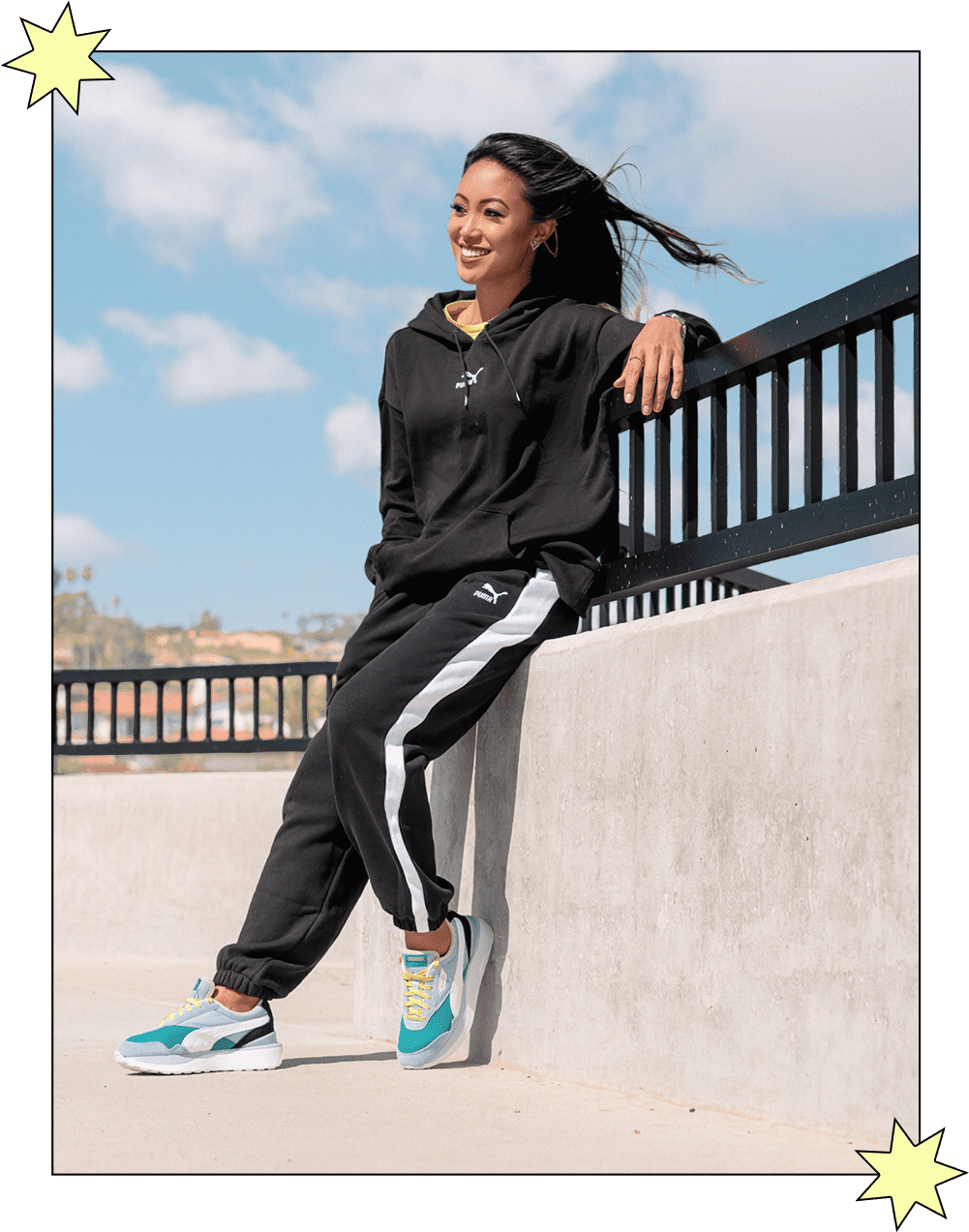 In becoming her best, strongest self, Tisha wants to help others — especially women — rise to the top as well. “Especially as women, we will always accomplish more together than alone,” she said. “It’s important we cheer each other on. After all, hyping another woman up does not affect your career at all. If anything, it’s just going to make you better.”

Tisha believes one of the biggest ways to help women realize their potential is by sharing success stories — whether that be her own or another woman’s. From there, it’s easy to find common ground. “To me, female empowerment is all about creating unity — whether that’s through sports or outside of sports — and connecting strong women together,” she said. “It’s empowering in itself when you feel that from within, but that feeling is amplified when you’re surrounded by other women who also feel empowered.”

The sports industry is no exception. Tisha makes a point to promote female athletics through her various platforms, stressing that young girls especially need these types of role models. “There’s so much to celebrate in women’s sports,” she said. “What we can accomplish is mind-blowing! We can break boundaries, overcome standards, be amazing athletes, and still create life — women are incredible. So it’s so important to keep on pushing female sports and awareness and growing the industry.” 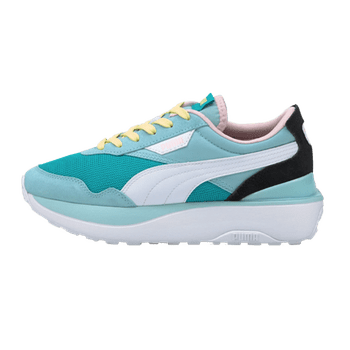 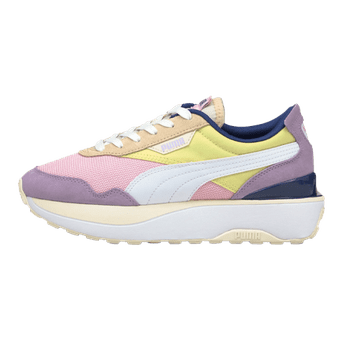 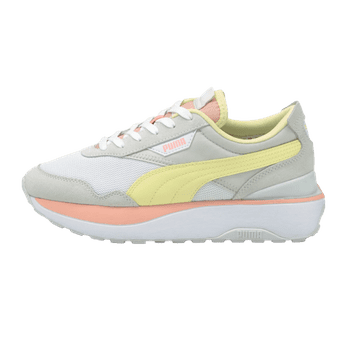