Exclusive: Burberry Teams Up With Ssense to Present Imaginary Cities at Burberry SoHo

Marking the first time that Burberry has invited another retail partner to take over one of its spaces, the British brand has teamed with Ssense to present “Imaginary Cities” at Burberry in SoHo.

Burberry and Ssense have come together to create an offline and online multidisciplinary consumer experience. Brought to life on burberry.ssense.com, the online experience is designed to mirror the physical immersive space in the store. It will be open from June 17 through June 26.

Ssense, a Montreal-based global technology platform, features a mix of established and emerging luxury brands across women’s wear, men’s wear, children’s wear and “Everything Else.”

For the collaboration, the facade of Burberry SoHo at 131 Spring Street will be taken over by a series of motion graphics, introducing an entryway to the store’s ground floor, transformed through a system of tunnel interventions, raised pathways and dynamic lighting pouring through distressed tensile canopies expressly pulled away from the store structure. The journey then winds through the store into a dedicated showcase introducing Burberry’s Mythical Alphabet, a new capsule collection (designed by Burberry)  celebrating the Burberry animal kingdom. 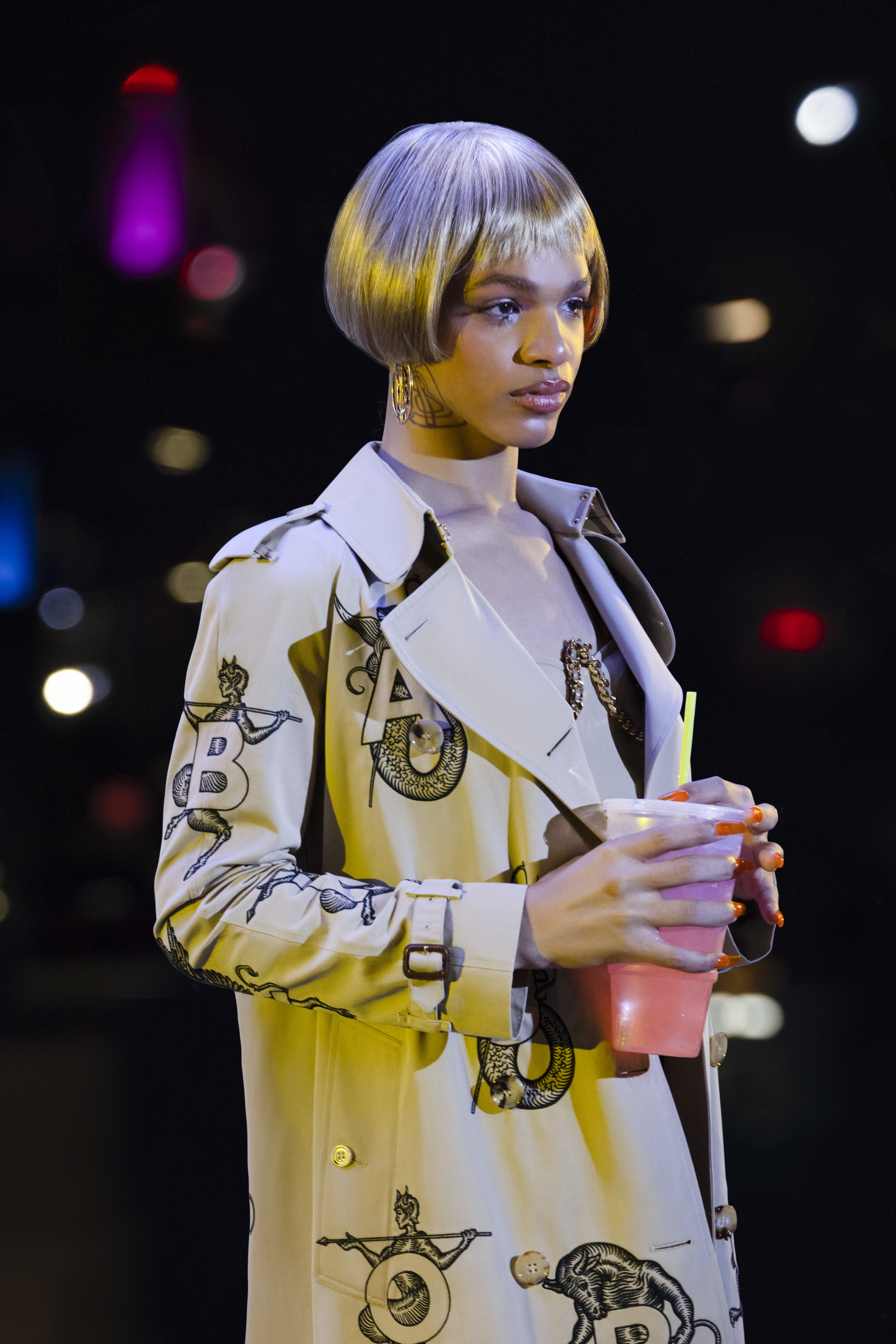 A still from the film with a look from Burberry’s Mythical Alphabet collection. courtesy shot.

On the store’s second level, an immersive Burberry beige viewing room will screen the exclusive “A-B-CITY” short film, a specially commissioned film by Burberry and Ssense exploring the theme of Imaginary Cities. The film is eight to nine minutes. 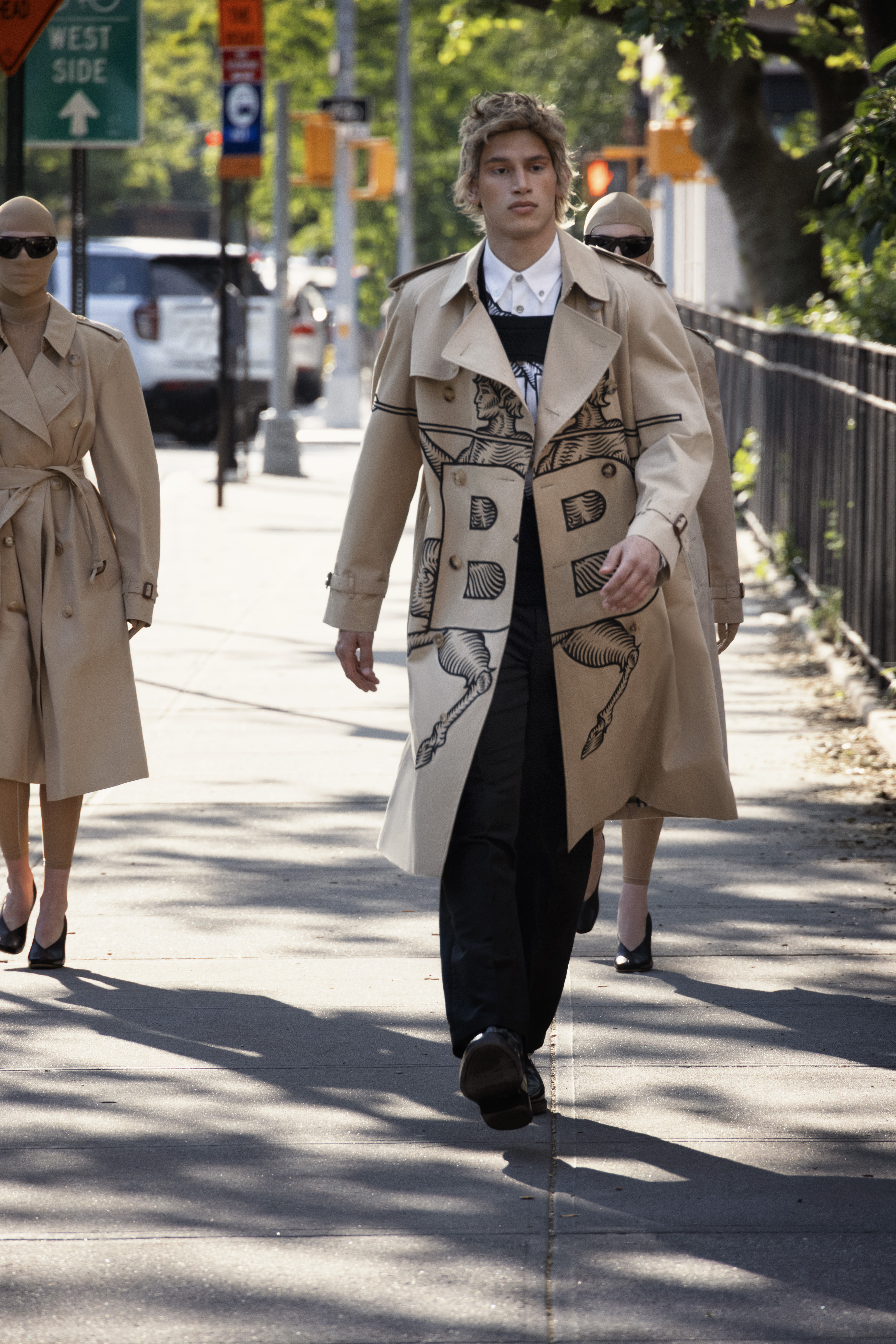 A still from the film spotlighting a trenchcoat in Burberry’s Mythical Alphabet capsule. courtesy shot.

The film is directed by New York collective Torso Solutions and set within the noisy hum of New York. It is focused on the city itself as a key character, through which three adjacent vignettes move entropically in time. Featuring personalities including Alexis Chaparro, Lourdes Leon and Selyna Brillare, the film is an abstract meditation on coping with extreme change, with vignettes written by Brontez Purnell, Juliana Huxtable and Natasha Stagg.

Through a stream of consciousness and poetic inner thoughts, the film asks, “how are we to deal with a present that has already caught up to the future?” It contemplates doing nothing, or doing too much, but right now in a city, going through it with everyone else.

Burberry’s Mythical Alphabet capsule collection will be available exclusively at Ssense, burberry.com and select Burberry locations across the U.S.

Gianluca Flore, president of Americas and Global Retail Excellence at Burberry, said, “At Burberry, we are driven to innovate, pushing the boundaries of how our customer experiences our brand in both the physical and digital realms. This collaboration marks the first time we have invited a partner to design a truly immersive experience within Burberry SoHo. We look forward to revealing Imaginary Cities to audiences in New York and beyond, capturing the imagination with these new spaces and Burberry’s Mythical Alphabet capsule collection.”

Flore explained the benefits of collaborating with a company like Ssense. “We are always looking for new ways to inspire and excite our customers, whenever they encounter Burberry. Ssense shares this vision, and throughout our partnership we have been discussing how we could collaborate to evolve the more traditional retail model and create truly immersive experiences.

“Bringing our ideas to life was a first for both brands. It’s the first time at Burberry we have invited a retail partner to take over one of our physical spaces and Ssense has never conceptualized a physical experience beyond their own retail spaces. We’re really excited by the outcome. Combining our shared expertise in retail innovation, we have created a unique experience that will transport our customers across the physical and digital realms,” said Flore.

Flore noted that Ssense and Burberry have produced creative collaborations before “but not on the same scale as the installation in the Burberry SoHo store.”

Asked if the concept will travel to other cities, Flore said, “There are many aspects of the Imaginary Cities idea that could be translated to other locations in the future, but there’s nothing I can confirm today on this front.”

Discussing what he hopes Burberry’s customers can take away from this collaboration, Flore said, “Exploration and discovery are in the DNA of our brand, and we want to continue building new worlds for our customers to experience in person and digitally inviting our customer to interact with the Imaginary Cities installation at our SoHo store and online is just one of the ways we are pushing the boundaries of what is possible — reimagining and redefining  the retail experience at every opportunity.”

Krishna  Nikhil, chief merchandising and marketing officer at Ssense, added, “Imaginary Cities arose from our long-running creative and commercial partnership with Burberry. Ssense has long explored the interaction and blurring boundaries between digital and physical across our own properties but this is the first time we’ve been invited into a partner’s space. We were thrilled to be welcomed into Burberry SoHo and combine our expertise to further examine what the physical and digital experience means for creative collaboration and community in contemporary culture. Imaginary Cities was conceptualized entirely remotely and under the most unpredictable circumstances, with teams spanning three countries. We are looking forward to having or shared communities experience Imaginary Cities in both physical and digital forms.” 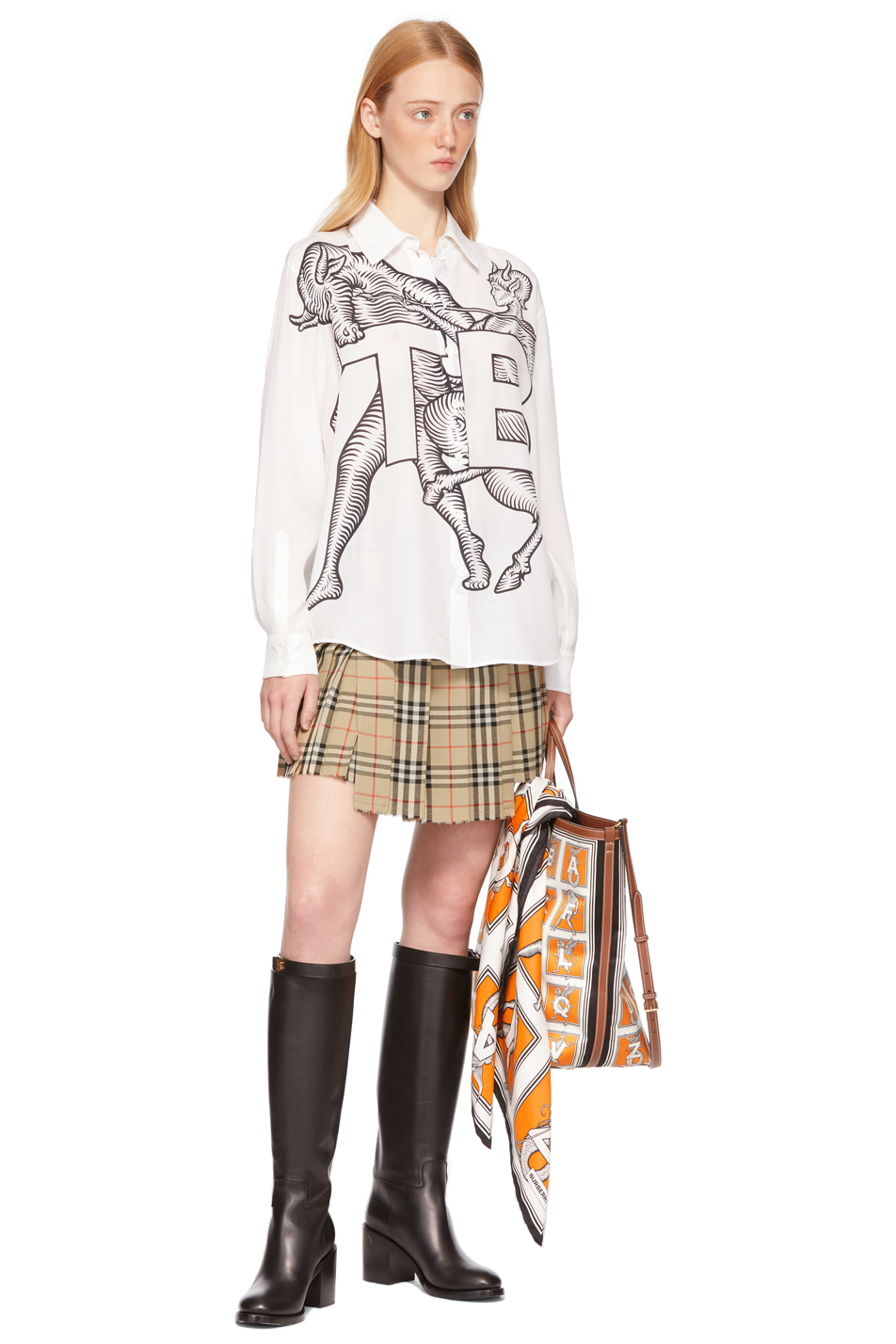 A look from the Burberry Mythical Alphabet capsule. courtesy shot.

Nikhil said Ssense’s creative partnership with Burberry started back in 2019, where Ssense created editorial for chief creative officer Riccardo Tisci’s inaugural collection for Burberry, and continued with a series of creative projects with the brand. “This is the next step in that journey and certainly a bold one,” he said.

Asked what Ssense gets out of the partnership, Nikhil told WWD, “Having their input challenges our creative team, and we feel vice versa. It’s also just another platform for our customers to experience something Ssense can do,” he said.

Explaining how the collaboration worked, Nikhil said,  “We really worked on every single piece of the digital and physical experience. There’s the site-specific installation that opens June 17, we collaborated on the short film…they have  created something of the moment.” The film will premiere in the store that day and will be shown digitally on the same day on a micro-site they jointly created. “We’ve worked very hard to transport this physical experience to a digital context as well,” he said.

“Digital is certainly our strong suit. We’ve been experimenting with how to bring the same energy of physical installations to digital for a very long time. Since the launch of our Montreal space in 2018, we’ve been really experimenting with physical installations,” said Nikhil. For example, Ssense re-created the Chicago home studio of Off-White founder and Louis Vuitton Men’s artistic director Virgil Abloh in their physical space in 2018. “We’ve tried to blend both physical and digital experiences across the board,” he said. 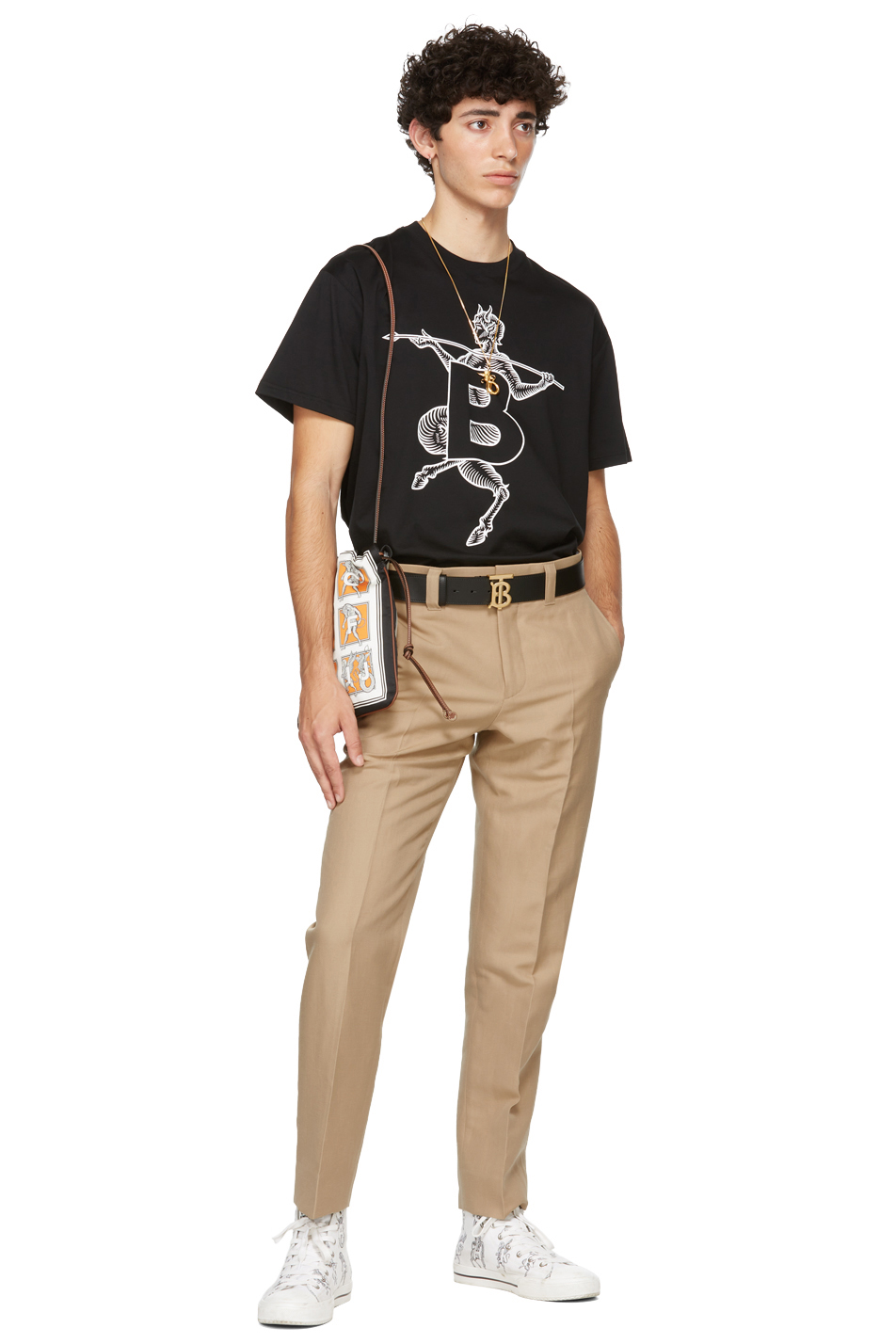 A look from the Burberry Mythical Alphabet capsule. courtesy shot.

All the project’s imagery will show that it’s a joint effort between Burberry and Ssense. There will be out-of-home billboards in New York, wild postings, and the facade of the store will have a digital takeover. “It will have a powerful statement for two brands coming together,” he said.

The U.S. is Ssense’s largest market. About 80 percent of Ssense’s audience is between the ages of 18 and 40. As reported, Ssense said last week that Sequoia Capital has taken a minority-investment in the company. The investment, Ssense’s first outside money in its 18-year history, valued the company at more than $5 billion Canadian.

Nikhil anticipates the bestseller will be the trench coat. “Layered with the Mythical Alphabet makes a powerful, forever piece. The way it shows up in the film makes it even more coveted,” he said.

“For us, with creative partnerships like this, we simply want customers to see and feel the creative output, whether they experience it physically or digitally. When you put your energy in to the right creative output, the business results come naturally,” said Nikhil.

Is This Burberry’s New “It” Bag?

Ssense Enters Beauty, Home, Pets and More With “Everything Else.”