Home » Beauty and Fashion » Cape Crusaders: Designers Bring Back a Staple of Heroes — and Villains

Cape Crusaders: Designers Bring Back a Staple of Heroes — and Villains

As superfluous as it might seem, the cape ranks as one of the more functional and versatile garments in men’s fashion history.

Military cloaks and capes worn by British and Russian soldiers in the 1920s and 1930s offered protection from foul weather, and also doubled as a groundsheet and makeshift tent, according to Andrew Groves, a professor of fashion design at the University of Westminster in London.

“The reappearance of cloaks on the runway is a reaction to the unprecedented global events of the last 18 months and a need to reconnect to simpler garments,” Groves mused in an interview. “In their focus on materiality, fabric and drape, cloaks act as a comfort blanket, a means of hiding away when we are feeling vulnerable in such uncertain times.”

Yet on the contemporary runway, or as depicted in fashion films, designer capes for men telegraphed extreme glamor and elegance, along with a side helping of mystery, which seems to run through the thread of the garment.

“It’s got a certain kind of panache or drama about it,” Steele said, mentioning the cape’s far-flung associations with cartoon heroes and villains, and also extravagant entertainers like Liberace.

The cape also enjoyed a quizzical pop-culture moment in a 1994 episode of “Seinfeld,” when Jerry and Elaine spot Frank Costanza on the street with a mysterious man wearing sunglasses and a cape. (He turned out to be Constanza’s divorce lawyer.)

According to Groves, cloaks came to prominence as a man’s garment as far back as 500 B.C. during the Roman Republic, when generals donned the paludamentum, a long cloak fastened on one shoulder as a ceremonial act when heading out for war.

“Historically, the role of the Roman Tribune, who wore long red capes, was to protect ordinary citizens from the oppression of the nobles and defend their liberties against the authority of the senate and consuls,” he noted. “This tradition gives rise to the notion of cape crusaders, who preserve justice, battle crime and do heroic acts.”

On the flip side, highwaymen and robbers have also donned capes since forever, and so these garments also came to symbolize concealment and secrecy.

“The 17th-century highwayman was an obvious influence at Saint Laurent, while Giambattista Valli’s capes conjured up ideas of magicians when coupled with evening attire,” Groves commented. “Ultra-fine cloaks billowed ferociously in the air as FMX bikes raced skywards at Celine. It is incredible how such a seemingly simple garment can be reimagined in so many different ways.” 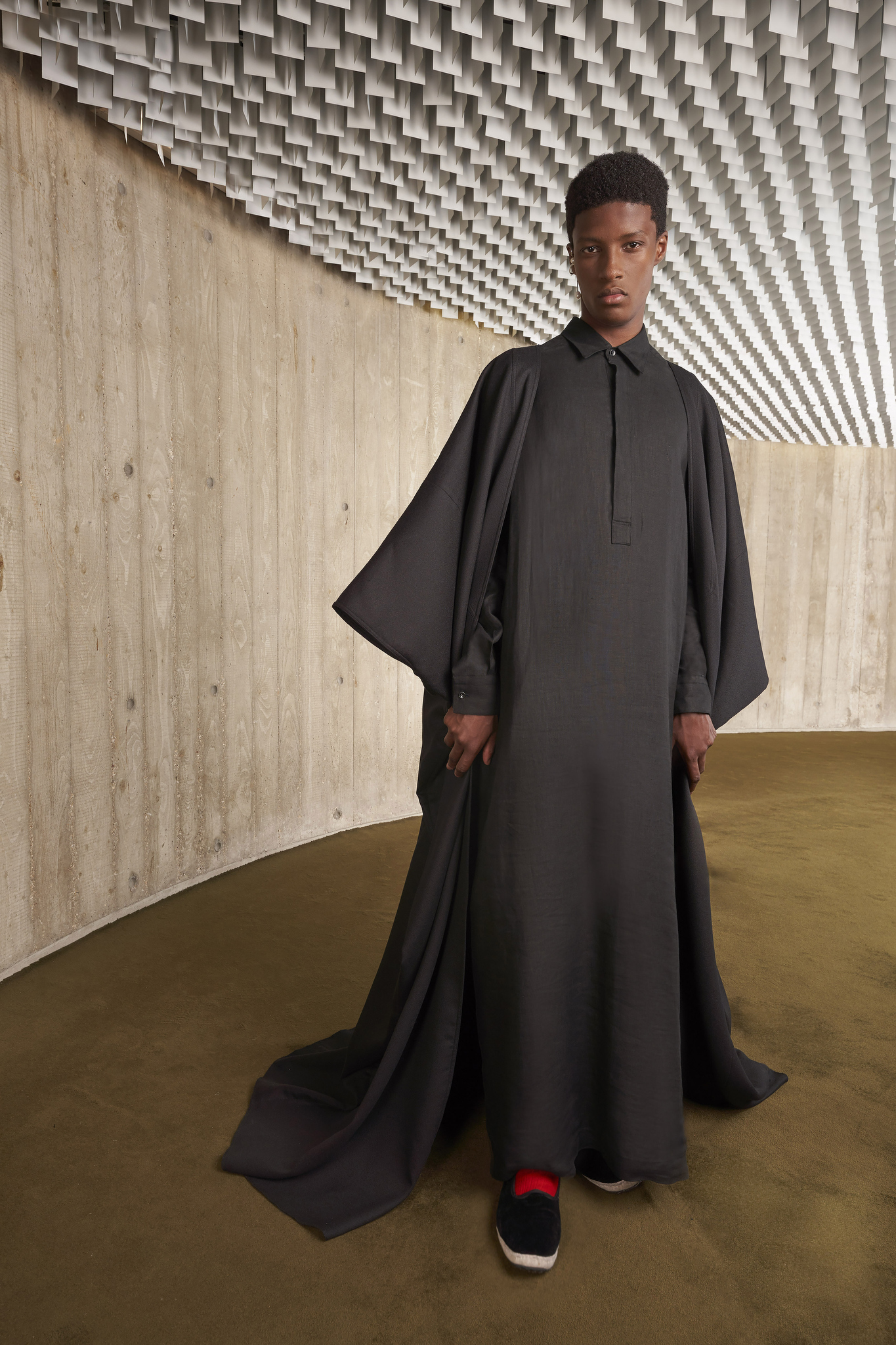 According to the professor, capes and cloaks appeal to men who embrace clothing “for its romantic possibilities” and as a way of expressing a sense of freedom.

“They transcend the whims of fashion and allow us to connect to more mystical, ancient times,” Groves said. “The cloaks on the runway at the recent men’s wear shows demonstrate the diversity of approaches and meaning this seemingly simple garment can bring.”

Slimane also included several capes in his fall 2021 collection for Celine, and has been showing them occasionally since the late 1990s, often employing black silk normally used for women’s collections.

According to the house, the designer features capes “to reintroduce and reference historicism, a refreshed perspective and reinvention of his earlier designs and ideas on gender.”

Besides Liberace, other famous men who have worn capes include Evel Knievel, Elvis Presley and Mick Jagger while fictional characters range from Superman and Batman to Dracula, Darth Vader, Sherlock Holmes, Zorro and Phantom of the Opera.

“None of them needed to wear a cape to do their job, but donning one provided a sense of romantic drama and showmanship to their work,” Groves commented.

Despite its long history as a masculine garment, capes have also been worn for centuries by women, Steele said, noting they became fashionable in the late 19th century and “let’s say 60 percent of the 20th century. A lot of couture evening gowns had capes…because it was a more forgiving and flexible shape so that you could have all different kinds of evening dresses and be able to wear a cape over it.”

Groves noted that cloaks worn with men’s eveningwear were fashionable in the 1970s, and again in the early 1980s as part of the “New Romantic” style.

He also noted that the Westminster Menswear Archive boasts a number of capes, including one from the first collection of Italian brand Stone Island in 1982: It can also be transformed into a groundsheet if needed. 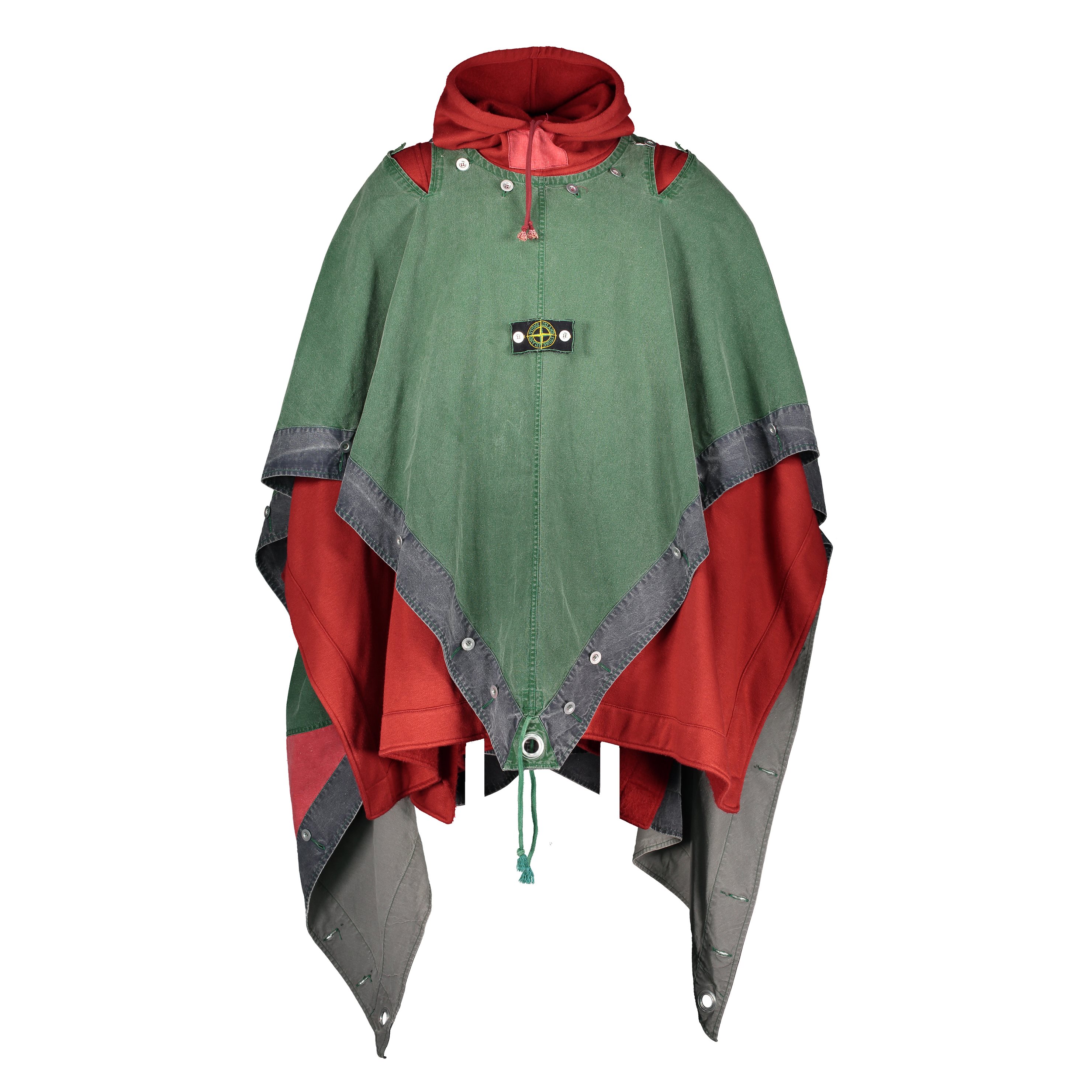 From Stone Island’s first collection, this cape is based on the German military Zeltbahn. Courtesy of Westminster Clothing Archive

Movies Tell Us How to Dress for Dystopia

How Tie-dye Is Helping Fashion to Overcome the Pandemic Blues