‘C Is for Code Switching’ and Other Lessons

The rapper Topaz Jones recently decided to cut the locs he had been growing since before high school. “This was the closest I’ve ever felt to a full rebirth,” he said.

A friend had told him about a tradition in which people let their locs grow during a period of personal development and then cut them as a symbolic way to start over once that period had ended.

“The pandemic, the album, like everything was coming full circle,” Mr. Jones said. “I didn’t need my locs to feel connected to my heritage.”

The album the 28-year-old Montclair, N.J., native was referring to is “Don’t Go Tellin’ Your Momma,” which was released in April of this year, along with a Sundance-winning film of the same name.

The loosely autobiographical film — which Rolling Stone described as “the next great visual album” — has some parallels with “Lemonade,” the film that accompanied Beyoncé’s 2016 album. Each is an exploration of Black identity, ancestry and family, and Chayse Irvin was in charge of cinematography on both projects. Mr. Jones, who wrote the film and co-directed it with the director duo rubberband, called the project a “beautiful snapshot of the village and community that I’ve emerged from, and that will not always be there.” 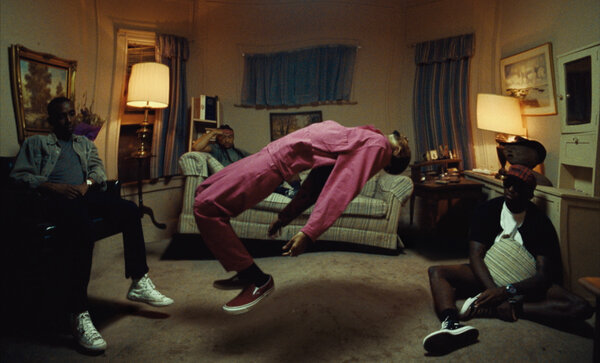 The backbone of the piece is a reinterpretation of the Black ABCs, flashcards from the 1970s used to teach Black children the alphabet. Instead of “A is for Afro,” “B is for Beautiful” “C is for Cool” and “D is for Dream,” the film uses phrases that are reflective of Mr. Jones’s life and art — “A is for Amphetamine,” “B is for Blue” and “C is for Code Switching,” for example. In the segment titled “D is for Drums,” Mr. Jones raps the lyrics to the song Buggin’ as the drummer Jharis Yokley creates a beat on a kitchen table using his hands.

“So much of this project was a channeling,” Mr. Jones said. “I didn’t really feel like I was steering the ship, as much as the course was already plotted.”

The name Topaz was initially Mr. Jones’s gamer tag. He was born George David Brandon Jones, to Valerie Hepburn, a Harvard-educated emergency doctor turned holistic practitioner, and Curt Jones, a musician and producer who was in the popular 1970s funk band Slave.

“I could go on and on about my family,” Mr. Jones said recently, seated in the backyard of Stella’s, a Caribbean restaurant in the Park Slope section of Brooklyn. He talked about his mother’s St. Lucian and Russian-Jewish ancestry; his great-aunts’ Motown group that never fully debuted; a close cousin he grew up with who came to live with his family at one point; and an uncle-like figure who gave him his earliest recording studio experience.

But it’s his paternal grandmother, Emma Janice Jones, 94, a former insurance company representative — a woman who “radiates goodness” and serves as the “the compass for how to treat other people” — that he gushed about.

She is one of the many family members who appear in the film. Home video clips of Mr. Jones performing at a talent show, shooting hoops on a basketball court, as well as clips of his mother ironing her outfit the day of her graduation are interwoven with interviews of artists and activists, and surrealist interpretations of real-life events.

Mr. Jones recalled how insecure he felt about being propositioned to fight as a young kid and not knowing how. That small nugget of an experience stuck with him and it appears in a scene where he is in a boxing ring; that segment it titled “P is for Playfight.”

His project is meant to underscore a simple fact: There’s value in documenting Black life, no matter how mundane. Banal, boring, day-to-day joys and hurts are just as much part of the Black experience — and the act of archiving it is all the more important because such documentation is historically rare.

It’s “vindicating evidence of our richness,” said Shola Lynch, a filmmaker and curator of the moving image and recorded sound division at the Schomburg Center for Research and Black Culture.

According to Ms. Lynch, newspapers in the 20th century were penalized for including Black people in their photographs. The only evidence of the everyday, for Black people, she said, “were in private hands, in family hands.”

The home videos, which Mr. Jones found while he was helping his mother clean out a storage unit, connected him to a long tradition.

“It’s so important to reclaim these artifacts from our family’s past, because they do connect to history and they make them live,” Ms. Lynch said. She said modern projects like Mr. Jones’s allow “for historical imagination.”

“What I have is closer to this Black people doing nothing, coming-of-age, internal angst type of thing. And I think it took a long time for me to recognize.”

For many Black creatives, particularly those in predominantly white spaces, defining success against the terms of white institutions can be a long journey. His relationship to the weight he places on that acceptance “is an evolving one.” Still, he can’t deny his Grammy aspirations.

A festival win, on the other hand, wasn’t even on his mind, he said. “Don’t Go Tellin’ Your Momma” won an award in the short film category at Sundance and also received a special recognition at SXSW.

It’s an added bonus, he said.

After the death of his mother’s stepmother, a manuscript written by his St. Lucian grandfather was discovered among his belongings. “It just hit on a lot of similar themes about external validation, about being a Black person in white spaces. All of the things that I was feeling really insecure about,” Mr. Jones said.

“It was like, Oh, I’m supposed to be making this album right now, or else I wouldn’t have gotten this,” he said. “This wouldn’t have come into my world.”