Home » After a Few Years, a Change of Heart Leads to a Wedding

After a Few Years, a Change of Heart Leads to a Wedding

On a cold and rainy fall day in 2012, Valentina Stackl and Alexander David Campbell broke up.

Ms. Stackl and Mr. Campbell were then in their early 20s. Each had moved to Washington in 2011. Mr. Campbell was working in the research department of a labor union; Ms. Stackl was with the Association of Farmworker Opportunity Programs, a farmworkers’ rights nonprofit group. They had met through an app and had been dating for about a year, but the relationship wasn’t clearly defined.

They had spent their time together like a couple — they went to museums, picnicked in the park and strolled around D.C. — but they hadn’t ever called each other boyfriend or girlfriend. After a year, Ms. Stackl was ready to make the romance more formal. Mr. Campbell wasn’t.

They discussed this impasse over red wine late that fall day at Mr. Campbell’s home. It would be best, they ultimately agreed, to end the relationship.

Ms. Stackl remembers walking away from Mr. Campbell’s house after that conversation, trudging through the rain. She was umbrella-less and unhappy. And she was all too aware that she was living through a dramatic scene fit for a movie.

Or, at least, it didn’t come that day. Or that week. Or that month. A call of sorts would come years later, in a different form.

Mr. Campbell and Ms. Stackl didn’t interact much in the months that followed their break up. They lived in the same neighborhood in Washington and shared mutual friends, so they would periodically cross paths on the bus or at a house party. But for the most part, they avoided each other.

In 2014, Ms. Stackl’s stepfather died suddenly. She called Mr. Campbell for support. “At that point, we hadn’t been so close,” Ms. Stackl said, “but I just wanted him near me.” 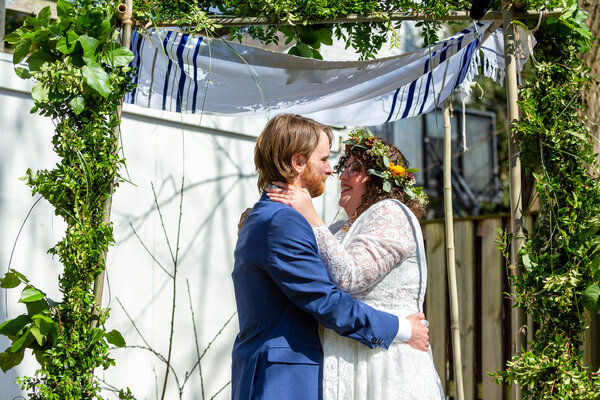 Mr. Campbell obliged. “I still had a lot of warmth for Valentina,” he said. “So I was happy to provide whatever comfort I could.”

From there, they built a platonic relationship that lasted for a few years. They privately knew that some romantic feelings remained, but they ignored them for the sake of preserving the friendship. They didn’t speak much about their past romance.

A turning point came in 2017. On the day of the presidential inauguration of Donald J. Trump, Ms. Stackl and Mr. Campbell each took part in protests around the National Mall. They attended separately. At one point, though, they spotted each other across a sea of people. The pair locked eyes for a few moments — it was a steady and supportive gaze in an otherwise deeply uncertain situation.

“I remember he gave me this gentle, affirming smile,” Ms. Stackl said.

They started communicating more and more after that day. By the end of that summer, they were back together. Soon after, Mr. Campbell left for a yearlong study period in Buenos Aires, during which time the couple traveled around South America together. Ms. Stackl introduced Mr. Campbell to her extended family in Chile. When Mr. Campbell returned from his studies, the couple moved in together.

Ms. Stackl, 35, a senior communications specialist for Greenpeace USA, and Mr. Campbell, 33, a policy adviser for Representative Jesús G. García, Democrat of Illinois, were married March 20 in the bride’s mother’s backyard in Silver Spring, Md. The ceremony was led by Kathleen Brower, a friend of the couple who is a nondenominational minister.

Ms. Stackl and Mr. Campbell pointed out that their work in environmental and labor activism — both generations-long issues that call for day-to-day struggles in service of a long-term goal — have, in an indirect way, prepared them well for marriage.