20 of the most iconic red carpet looks from the ’90s 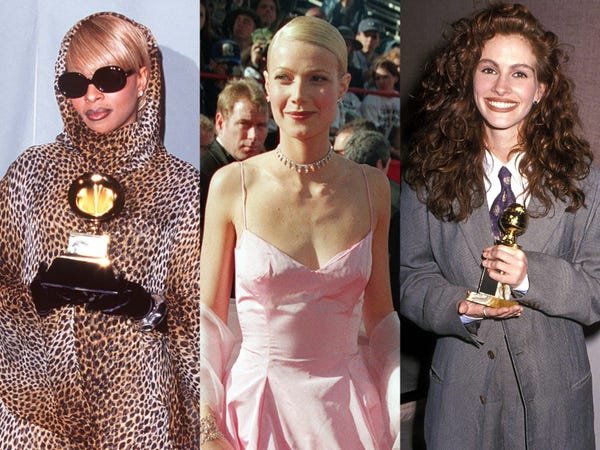 From animal prints to completely see-through dresses, red carpets in the 1990s were filled with memorable looks.

Throughout the decade, celebrities walked red carpets in iconic ensembles. While some looks were truly out there, others were unforgettable because of their simplicity.

Here are 20 of the most memorable looks seen on the red carpet in the '90s. 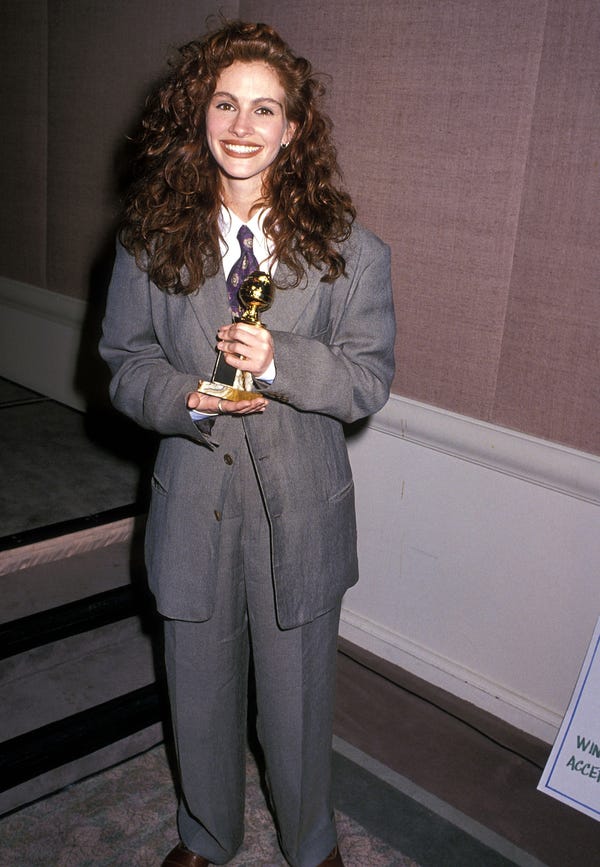 When Roberts won her first Golden Globe in 1990 for her role in "Steel Magnolias," she decided to wear a Giorgio Armani men's suit.

Drew Barrymore became the queen of casual attire on red carpets, like this everyday look at the 1991 "Guilty by Suspicion" premiere. 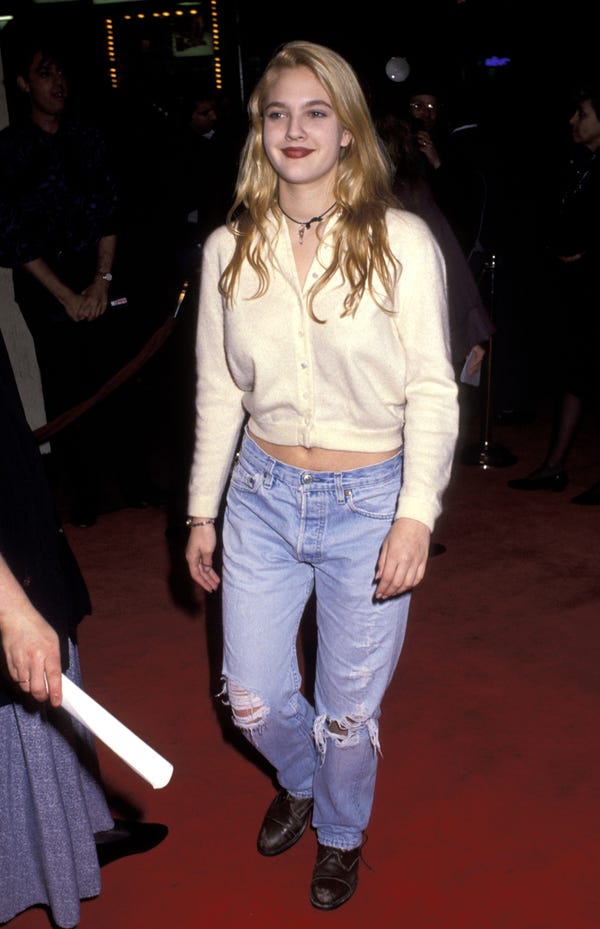 "Along with Winona Ryder and Kate Moss, Drew Barrymore gloried in grunge back in the '90s," Vogue's Susan Devaney wrote. "The 'ET' actor loved a pair of well-worn boots and a battered leather jacket just as much as she did her colourful cardis and Vivienne Westwood heels. With her cherubic curls and daisy choker chains, Barrymore tempered her goth aesthetic with cutesy touches."

Madonna famously dressed as Marilyn Monroe when she took a bedazzled Michael Jackson as her date to the 1991 Academy Awards. 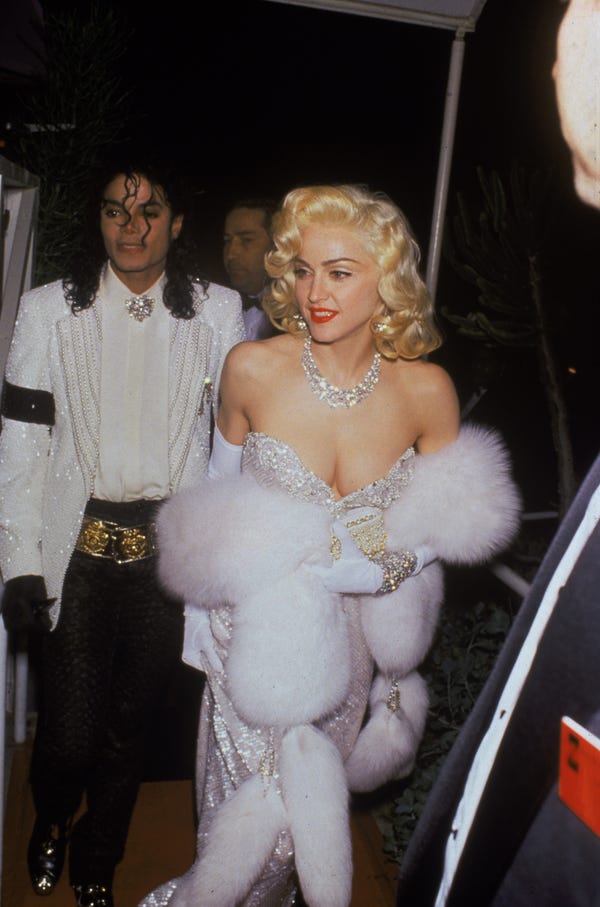 Madonna showed up to the award show's after-party dressed as the Old Hollywood star. The musician was wearing Harry Winston diamonds, which cost $20 million. The dress itself was designed by Bob Mackie, who designed the dress that Monroe wore when she sang to President John F. Kennedy, according to Harper's Bazaar.

The king of pop was her date for the evening, and in 2018, she called it the "best date ever."

In 1993, Brad Pitt turned up at a Hollywood movie premiere wearing just a paisley button-down shirt and pants. 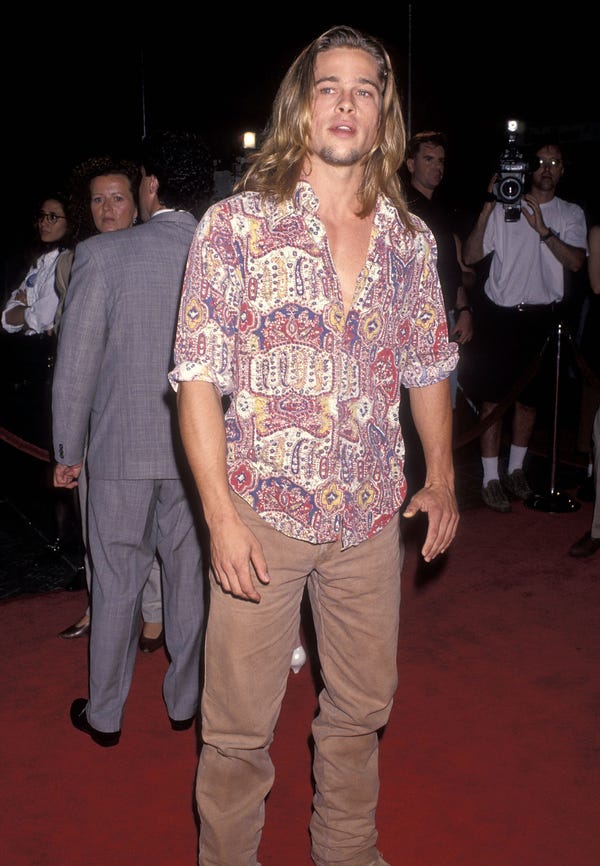 Pitt's outfit at the 1993 "True Romance" premiere is memorable for its simplicity.

"Though he can — and has — pulled off a basic T-shirt and jeans, Pitt has a gift for the unexpected," Vogue's Janelle Okwodu wrote. "In the '90s, that meant long beachy waves and paisley shirts at events where everyone else was decked out in black tie—his boho 'True Romance' premiere outfit is still a thing of beauty."

Whoopi Goldberg's colorful ensemble at the 1993 Academy Awards is still a memorable look. 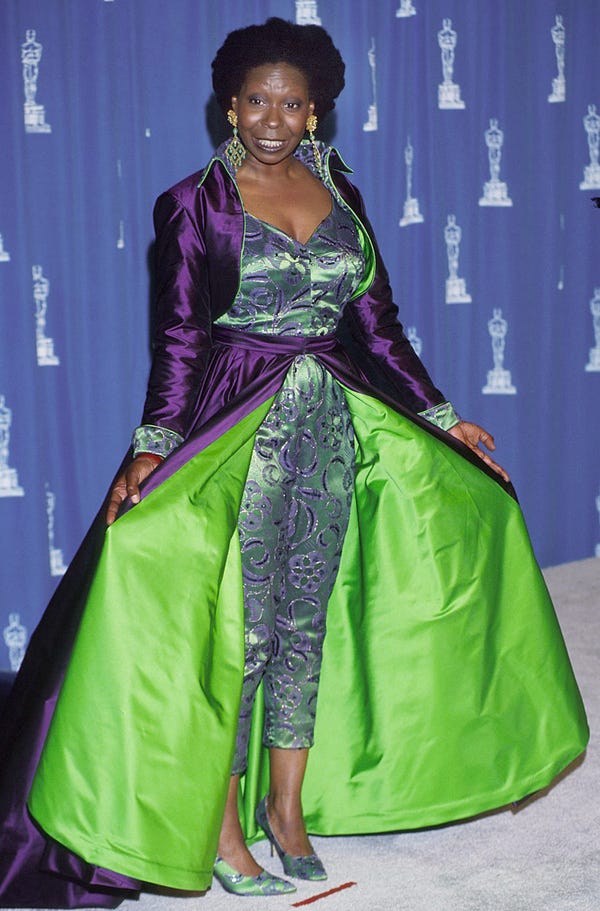 "Whoopi Goldberg eschewed the tyranny of black tie to wear a dress, a jumpsuit and a cape in purple and lime green brocade, simultaneously," the Guardian's Morwenna Ferrier wrote. "The look, 'inspired' by Disney, almost worked. This was the 90s, after all … Sadly, it tanked."

Halle Berry paired a fringe top with blue jeans at the MTV Movie Awards in 1993. 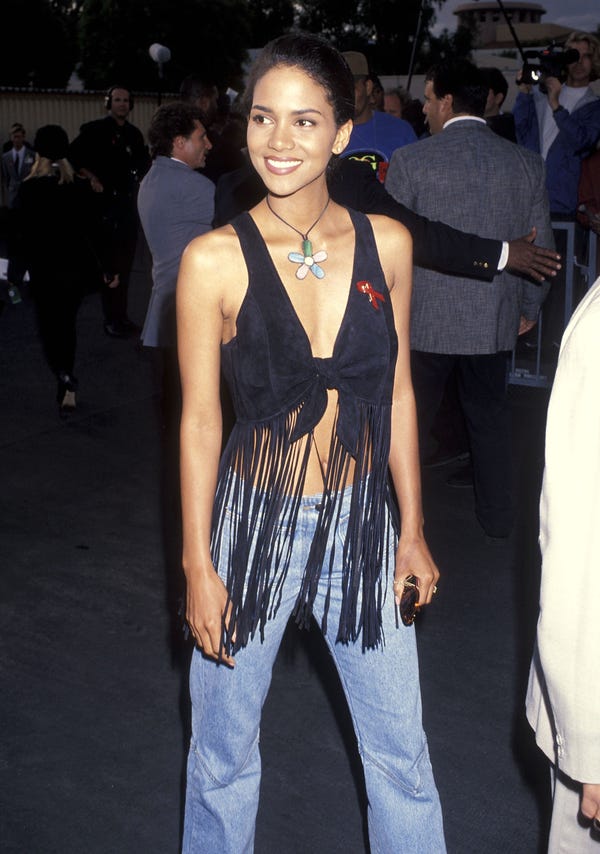 The actress' fringe top became an iconic fashion moment in the '90s: Elle has called it one of the "most outrageous red carpet moments."

In 1994, Princess Diana wore a simple black dress that became known as the "revenge dress." 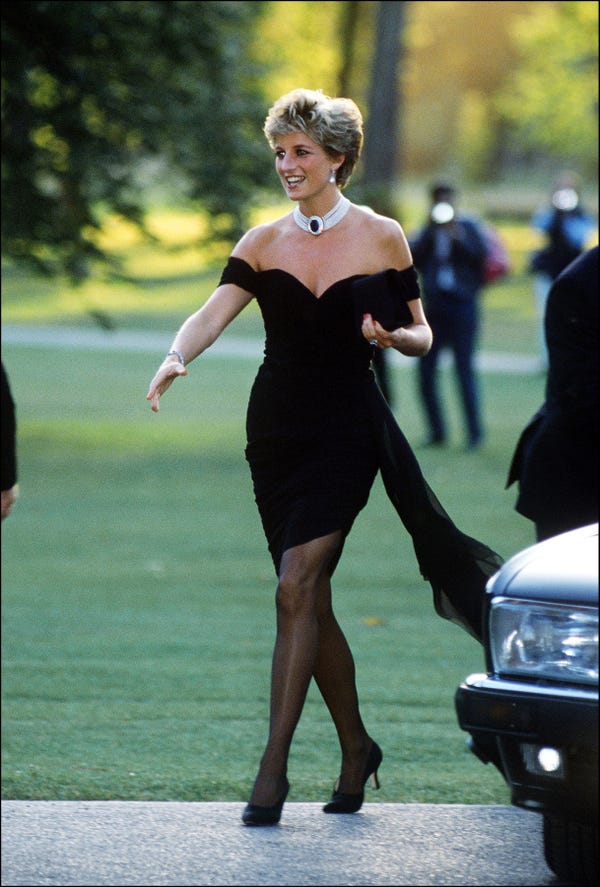 Princess Diana wore this dress to an event at the Serpentine Gallery in London — the same night Prince Charles' documentary premiered, detailing the ways he'd been unfaithful to the princess, according to The New York Times.

Some say the princess' dress, which was designed by Christina Stambolian, was her way of getting revenge and marked a departure from the buttoned-up royal family.

The dress Elizabeth Hurley wore at a movie premiere in 1994 helped launch her career. 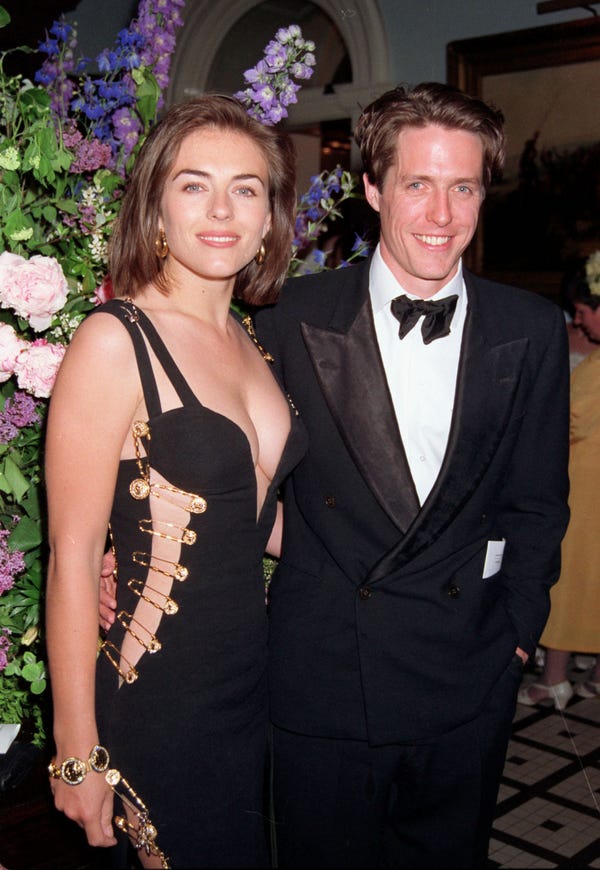 In 1994, Hurley attended the premiere of "Four Weddings and a Funeral" with her then-boyfriend, Hugh Grant, who was the star of the film. But Hurley was the one who got the spotlight when she showed up in a Versace dress with slits held together with gold safety pins.

"This accidental statement would change the trajectory of Hurley's career, thrusting her out of Grant's shadow and into the international spotlight," Oscar Holland at CNN wrote.

Leonardo DiCaprio's loose suit made a statement in the '90s. 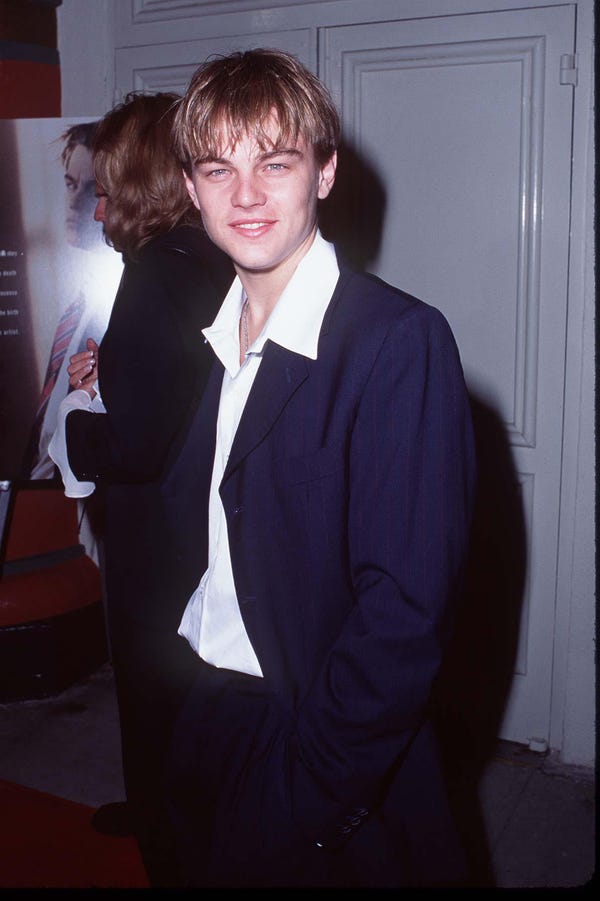 In 1995, DiCaprio wore a loose-fitting suit to the premiere of his film "The Basketball Diaries."

"Just take a styling tip from 21-year-old DiCaprio: leave the top button of your shirt undone, layer its collar over your lapels and top it off with a beaded necklace," GQ's Faye Fearon wrote, while also naming this look one of the actor's best.

Mira Sorvino wowed on the red carpet of the 1996 Academy Awards in this simple gown. 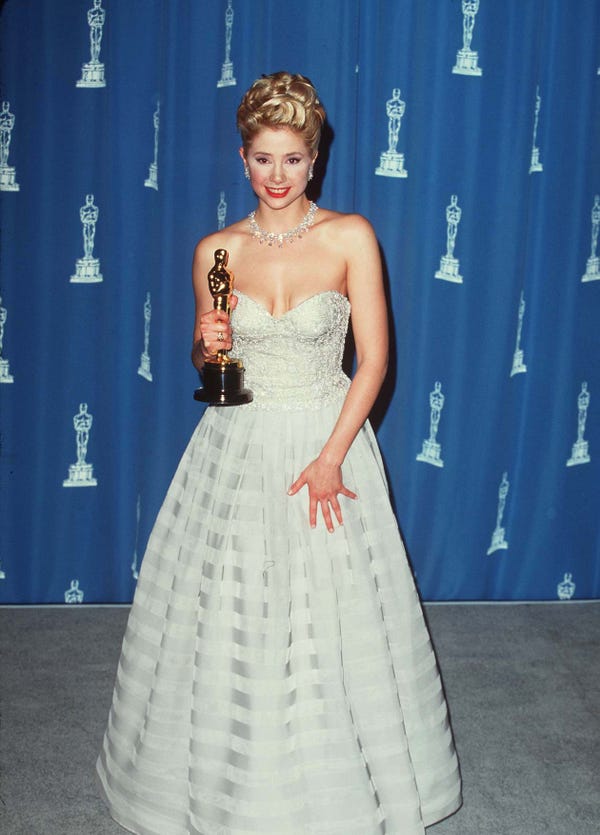 In 1996, Sorvino won her first Oscar for her role in "Mighty Aphrodite." To celebrate, she wore an Armani princess gown, which InStyle has described as one of the "most iconic red carpet dresses of all time."

Mary J. Blige turned heads in her leopard-print outfit at the 1996 Grammy Awards. 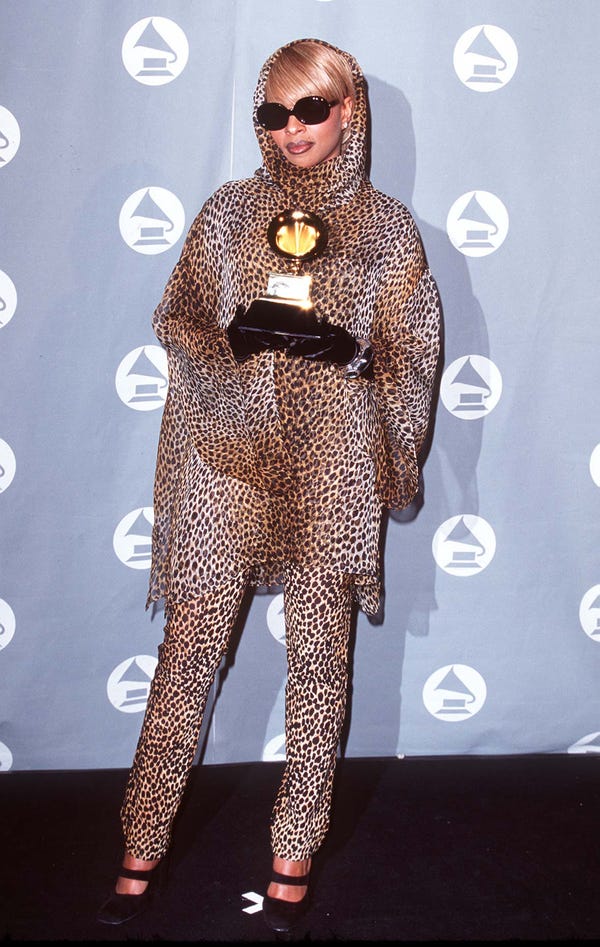 In 1996, Blige accepted her Grammy for Best Rap Performance by a Duo or Group while wearing head-to-toe animal print. The pants and matching hoodie were complemented by black sunglasses and gloves. 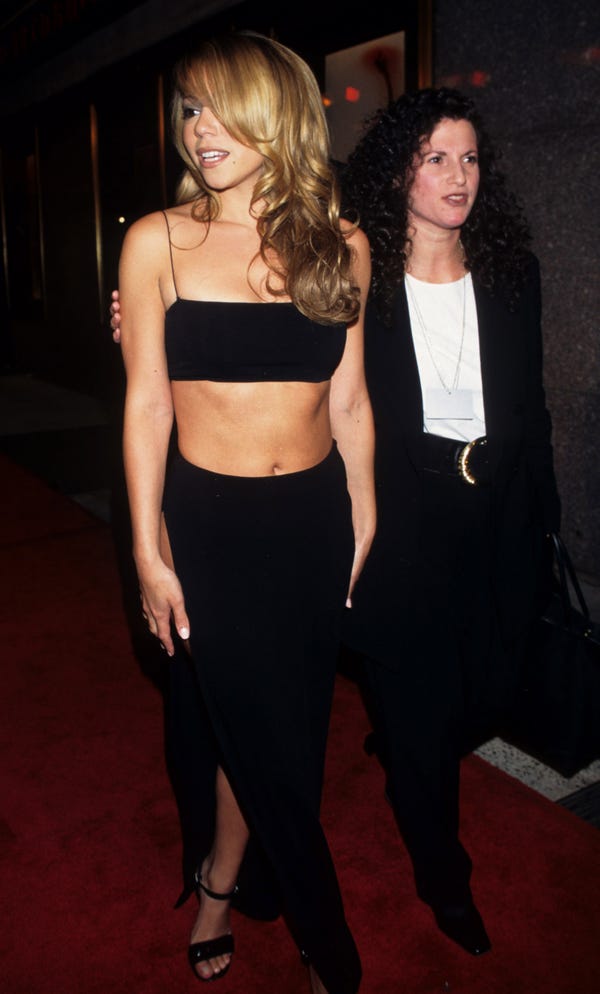 Although it may not seem like it now, Mariah Carey's dress in 1997 was considered controversial because of the amount of skin she showed. In fact, Harper's Bazaar calls it one of the most "shocking dresses of the '90s." But the publication also notes that the dress helped the musician "transition to a more mature market."

At the 1997 Brit Awards, the Spice Girls debuted their signature styles. 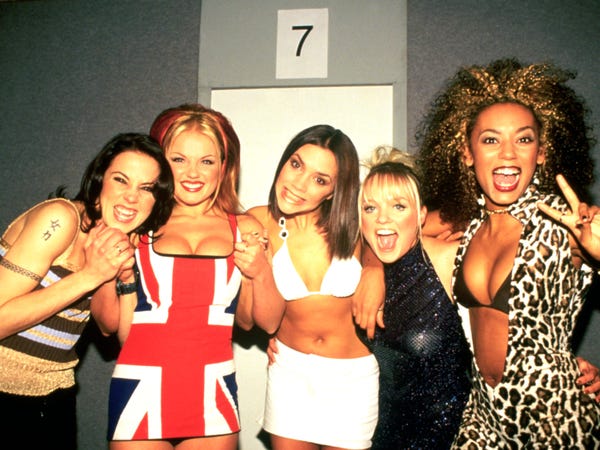 In 1997, the Spice Girls made their national TV debut on the Brit Awards. The outfits they wore on stage and on the red carpet also became synonymous with the group. For example, Geri "Ginger Spice" Halliwell's Union Jack dress is still replicated today as a Halloween costume.

In 1998, actress Rose McGowan arrived at the MTV Video Music Awards wearing nothing but a see-through beaded dress and thong. 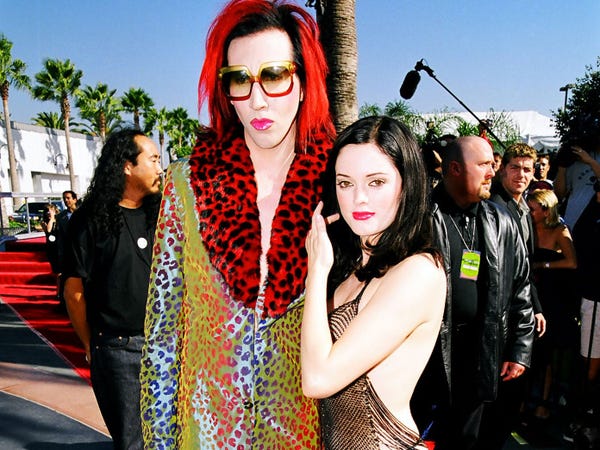 At the time, it may have seemed like a publicity stunt, but in 2019, McGowan revealed the dress had a much deeper meaning.

"I did that for a reason. It was my first public appearance after being raped," she said told fellow actress Jameela Jamil in 2019, according to People. "And I thought, it was kind of like Russell Crowe and 'Gladiator' when it comes out in the ring and he's like, 'Are you not entertained?' And that was why I did that. That was my response to being assaulted."

In 1998, Sharon Stone sparked a fashion movement when she matched a high-end brand with a shirt from the Gap at the Academy Awards. 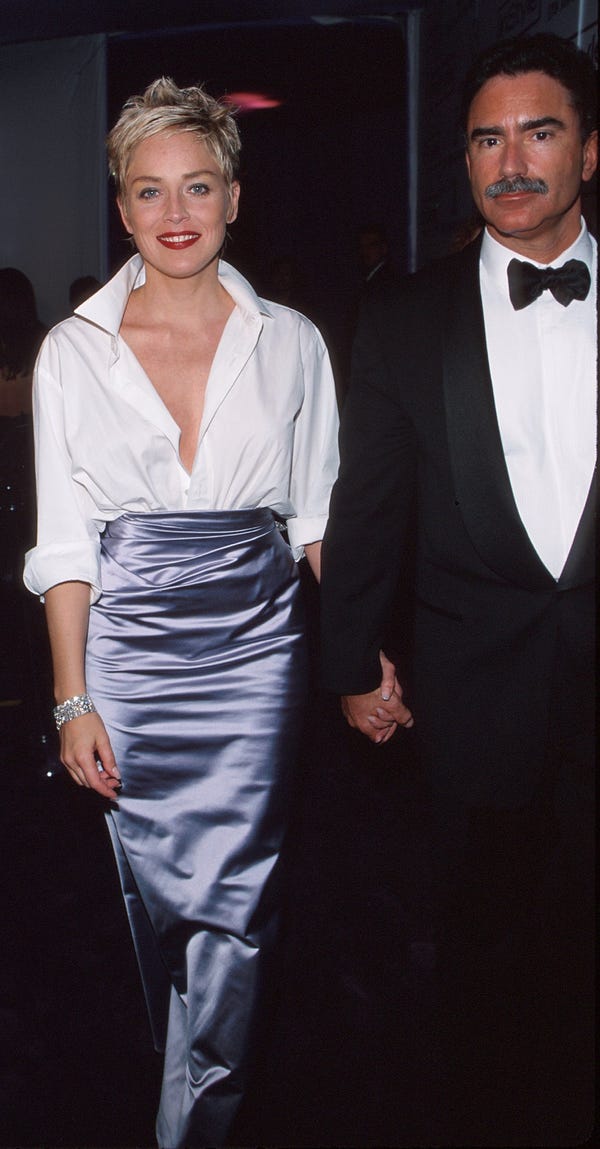 At the 1998 Oscars, Stone showed up in a button-down white top from the Gap that was tucked into a purple skirt from Vera Wang. Fashion journalist Nina García told the Academy Awards that the look was "the beginning of high meets low in fashion." 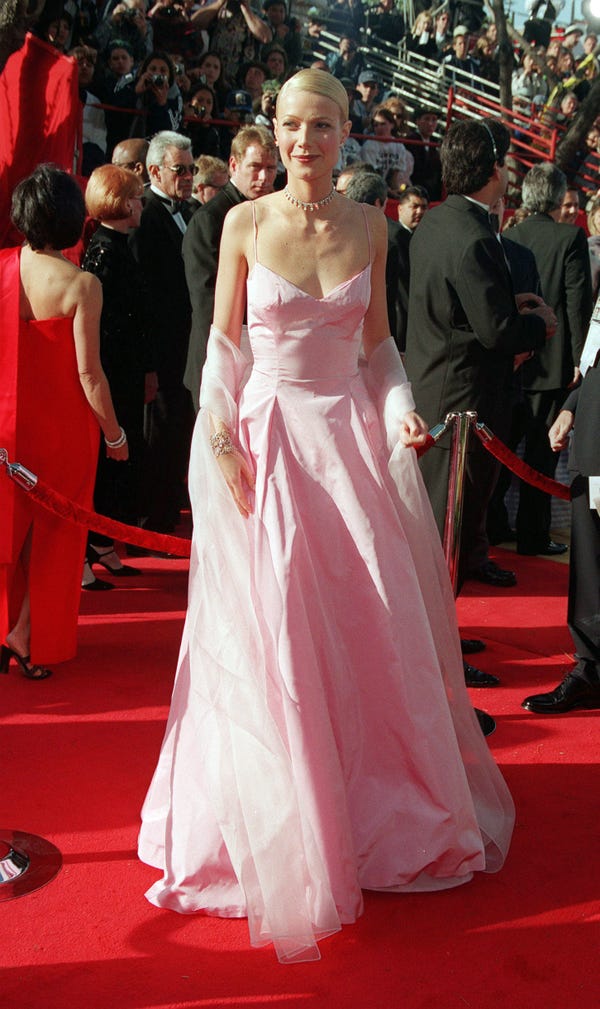 In 1999, Paltrow accepted her Oscar for her role in "Shakespeare in Love" in the now-iconic pink dress. In fact, some have described this pink dress by Ralph Lauren as "the one Oscar dress that defined the '90s." The actress actually picked out the dress herself while shopping at a boutique.

Celine Dion wore a backward tuxedo to the 1999 Academy Awards, and it was considered an iconic fashion fail. 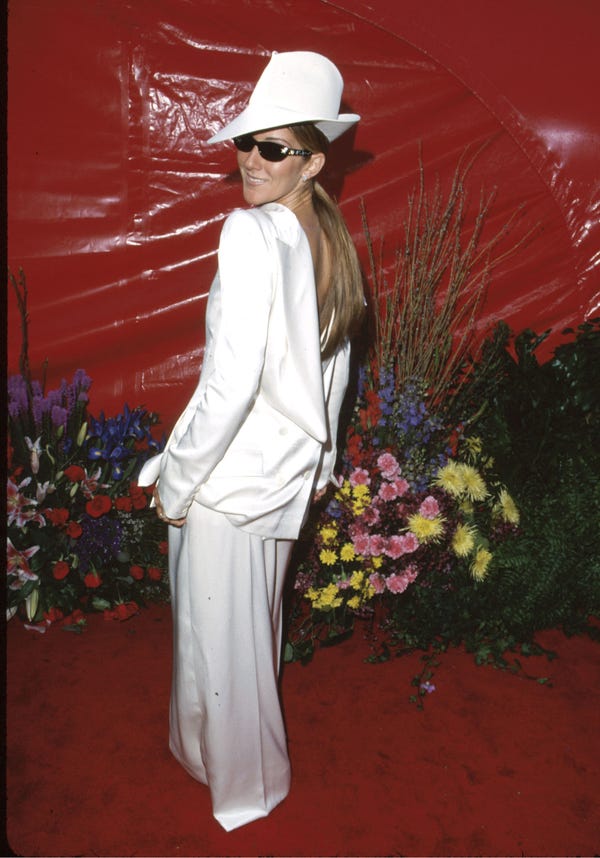 Dion donned the John Galliano tuxedo to the Oscars, and the outfit was panned, but it went down in fashion history. Today, the musician thinks the look might receive more favorable attention.

"When I wore that look, yes it was at the Oscars, and when I wore that, everyone was wearing dresses, not pants," she told People in 2017. "I was the only one with pants in a backward suit from Galliano and if I would do this today it would work. It was avant-garde at the time. And it doesn't matter, you just have to assume what you wear, you wear, and I did."

Lil' Kim shocked audiences when she showed up to the VMAs in a sequined outfit designed by Misa Hylton. It revealed one breast covered only by a bedazzled pasty.

"When she stepped onto the stage at the 1999 ceremony, she created an instantly iconic moment thanks to her bold outfit and the swagger with which she wore it," Vogue wrote about the bold ensemble. "The custom piece by Misa Hylton has since set the standard for attention-grabbing awards-show fashion." 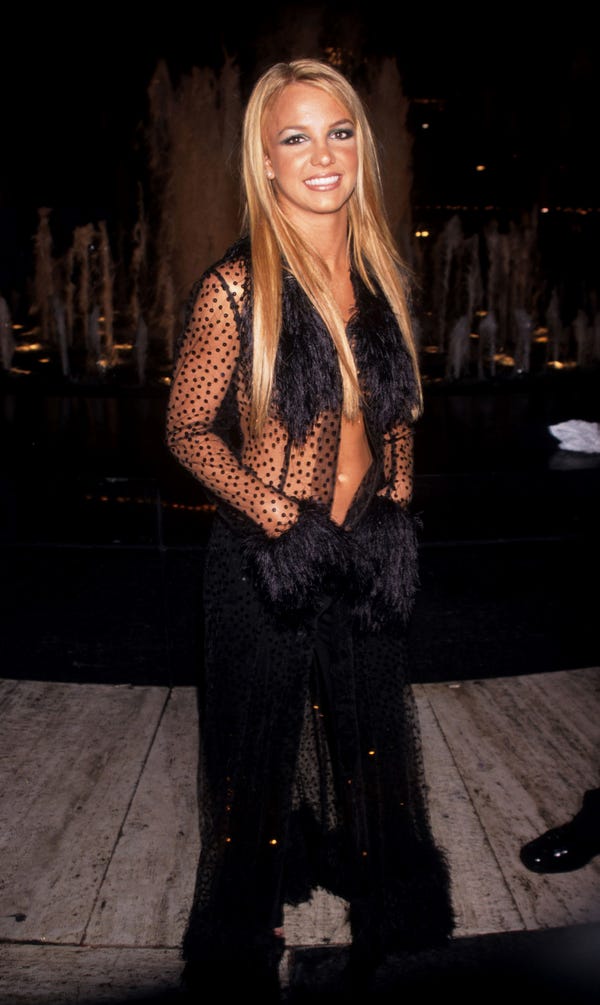 Spears was a rising star at the time — she'd released her first single, "…Baby One More Time," the year prior. Her red carpet style was still in development but this black ensemble foreshadowed her bold fashion choices to come.

Insider reporter Hayley Peppin called the look one of the"most daring outfits" the musician has ever worn. 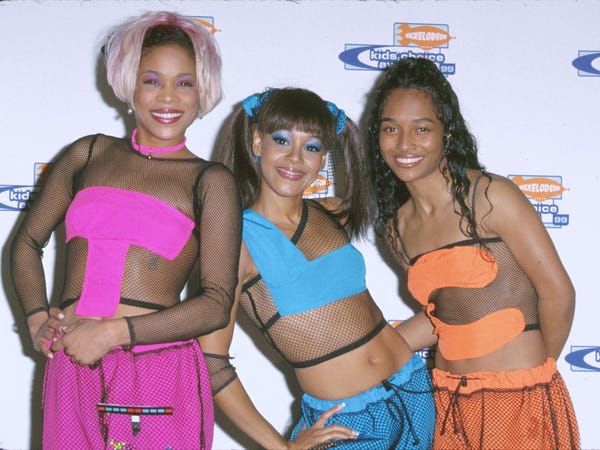 The girls of TLC showed up to the Kids Choice Awards in matching outfits. Together, letters on their tops spelled out the name of the group.

"When you're as small as we are, you don't need a bra all the time," Rozonda "Chili" Thomas told W Magazine in 2017. "The measurement was spot on."

Related posts:
Jacob Elordi Reminds Fans He’s a ‘Human Being’ Amid Kaia Gerber Rumors
The First ‘Dune’ Trailer Will Give You All Of The Chills
Popular News
Mary Trump reveals what it’s like to be gay in the Trump family
29/09/2020
Man Utd wonderkid Ramon Calliste, called ‘the next Giggs’, now owns luxury watch business and makes £5m a year – The Sun
26/03/2020
Megan Thee Stallion Addresses Criticism Over Twerking: ‘I Love to Shake My A**’
26/03/2020
Police guard shops to stop coronavirus panic-buyers and enforce social distancing – The Sun
26/03/2020
Coronavirus: Good Morning Britain’s Dr Hilary reveals ‘game-changing’ self-testing kit
26/03/2020
Recent Posts
This website uses cookies to improve your user experience and to provide you with advertisements that are relevant to your interests. By continuing to browse the site you are agreeing to our use of cookies.Ok